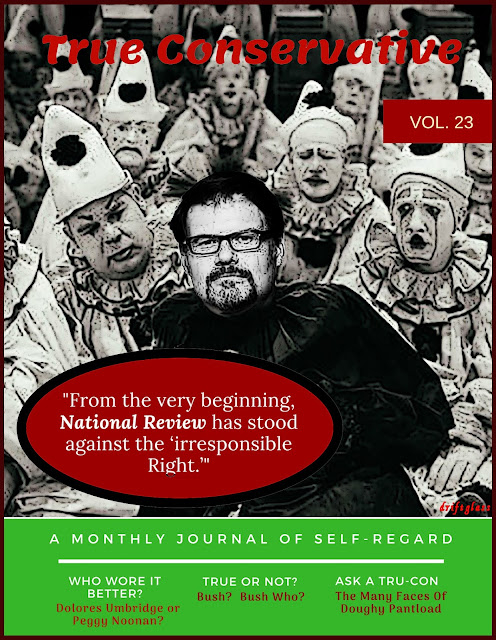 Mr. Jonah Jacob Goldberg, son of  Lucianne and Sidney Goldberg, would like everyone to know that his rag -- the National Review -- has always been a bulwark against the rising tide of depravity on the Right:


From the very beginning, NR has stood against the ‘irresponsible Right.’

Jonah "proves" his point by first noting that, more than a decade before Jonah was born, William Buckley, Jr. made a great public show of casting the Birchers out of the Conservative movement through the front door...

...after which the Conservative movement quietly let them right back in through the side door. A fact which Jonah chose not to share with his readers.

From Rick Perlstein's "Before The Storm":


The attendees fell into two camps. Buckley and Kirk said they were ready to write the Birchers out of the conservative movement altogether. Goldwater and others counseled accommodation. He thought there were a lot of 'nice guys' in the Society and not just 'kooks' and that it wasn't time to precipitate breaks in the conservatives' fragile movement.

They settled on a compromise. National Review would attack Robert Welch, not the John Birch Society. Goldwater would take the line that Welch was a crazy extremist, but that the Society itself was full of 'fine, upstanding citizens' working hard and well for the cause of Americanism.

Jonah then leaps over pretty much the entire history of American Conservatism's steady devolution into a smarmy wingnut-welfare racket and lands boldly on the side of tsk-tsking Alex Jones.  But not his good friends and supporters on Fox News:


The same goes for cynical psychopaths such as Alex Jones. It was outrageous for Donald Trump to go on his show and praise him. It is outrageous and irresponsible that mainstream outlets blithely give airtime to clickbait hucksters and racist rabble-rousers.

The other day, I saw Candace Owens on several Fox News shows. I am not a fan of Owens, but my objection is not that she appeared on Fox or that Fox invited her to appear. My objection is that she has been a guest on Alex Jones’s Infowars...

Alex Jones, who cites Fox News' Tucker Carlson and Fox News' Laura Ingraham as two of his chief allies in his forever war against the monsters under his bed and the bugs under his skin 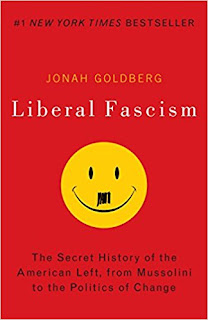 --wants to make it perfectly clear that however far from grace Conservatism may have fallen, that was all Fake Conservatism which certainly wasn't the fault of True Conservatives like Jonah Goldberg.  Which, needless to say, mets with the hearty approval of fellow travelers running this same scam:


Dinesh D’Souza and the Decline of Conservatism

Under President Trump, the most outrageous and aggrieved polemicists are thriving.

-- as a symptom of what Mr. Frum insists is an inexplicable malady which has turned so many of his Conservative peers into raving, racist zombies:


...
Now, as the saying goes, D’Souza is back—and bigger than ever. He has reinvented himself as something like the court intellectual of the age of Trump. Trump pardoned D’Souza on May 31, 2018. At the beginning of August, Donald Trump Jr. cohosted the premier of D’Souza’s latest movie, Death of a Nation. The movie compares Donald Trump to Abraham Lincoln and his Democratic opponents to Nazis. Afterward, Trump Jr. delivered a memorable summation of what he had learned from the film. “You see the Nazi platform in the early 1930s and what was actually put out there ... and you look at it compared to like the DNC platform of today, and you're saying, man, those things are awfully similar, to a point where it's actually scary.”

If you need a historian’s point-by-point refutation of D’Souza’s grotesque and absurd abuse of history, Princeton’s Kevin Kruse has posted a useful recapitulation.

I find myself pondering a different question as I watch so many people I have known and admired subordinate their talents and their integrity to Trumpism: How has my political generation of conservatives and Republicans laid itself so intellectually and morally low?

Dinesh D’Souza and I have moved in the same circles for close to three decades. He has been a guest at my dinner table; the back cover of my first book published back in 1994 carries a blurb from him. I’ve been disturbed by his evolution over the past decade and have sometimes said so publicly. Yet there is no denying his influence and success...

So, we find there are at least three things which big-thinking, professional Conservative Havers-of-Opinions agree on.

First, a Very Bad Thing happened to Conservatism at some point in the past.

Second, despite being big-thinking, professional Conservative Havers-of-Opinion, they have no idea what exactly the Very Bad Thing was (Spoiler: I guarantee that, sooner that you will believe possible, somehow, some way, Conservative dogma will settle on blaming the Libtards.)

Third, whatever the Very Bad Thing was, it was definitely not their fault.

Ah well, what do I know?

After all  I have no offices in New York or Washington D.C.  I have no reserved seat at the national media table.  I have no billion-dollar media corporation or wealthy benefactors subsidizing my every vagrant ideological fart and scratch.  I'm just a Libtard blogger waaay out here in the cornfield, with same access to the same information as other citizen with a public library card.  But I know enough to tell Messers Frum and Goldberg and Sykes this with perfect confidence.

What happened to your Conservative movement and to your Republican party is neither mysterious nor inexplicable. It's actually very straightforward.  Over the last 40 years, your Conservative movement and your Republican party have gotten hard-core, junkie addicted to saying and doing ever more inexcusably horrid shit, and then having it blow up in their faces, and then lying about it.

And on and on the cycle goes, until at last we find ourselves watching Mr. Jonah Goldberg -- one of the National Review stalwarts who has always "stood against the ‘irresponsible Right.’" -- not only appearing in  Dinesh D’Souza 's 2016 freak-show, "Hillary's America: The Secret History of the Democratic Party" but stepping out onto the Regnery Press red carpet to personally pimp D’Souza's wingnut conspiracy-porn.


You train a dog this way and you create a snarling beast that demands ever-larger helpings of Beggin' Strips every time it shits on the rug.

You train an ideology and a political party this way and you create a Trump.

"Yet there is no denying his influence and success..."

How is being said billionaire's dancing girl that BFFs like Goldberg STILL need to pimp the hell out of to keep relevant and in the headlines make one "influential"?

Whoever it was that laid you off, that was their loss and your readers' gain.

You and your damn facts!
Nice work. Thanks.

If you haven't noticed.

All the never Trumpers and True conservatives with "principals and all that". have been on the move of rebrand marketing.
The good ole conservative small government saints. The john kaisachs.

It is all across the MSNBC too.Because????, Those democrat radical liberals have no message. That is the theme.