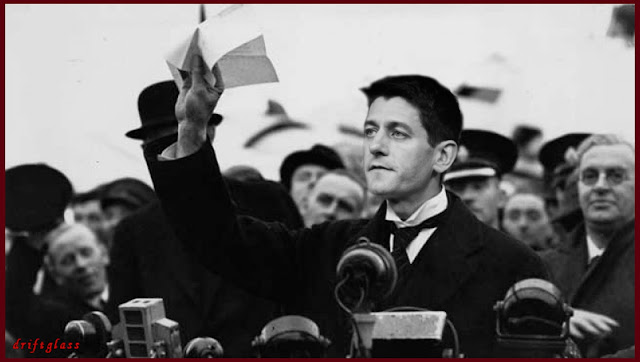 If they'd asked Paul Krugman, he'd have told them:

The Paul Ryan Story: From Flimflam to Fascism

...
On the other hand, I do have some insight into how Ryan — who has always been an obvious con man, to anyone willing to see — came to become speaker of the House. And that’s a story that reflects badly not just on Ryan himself, not just on his party, but also on self-proclaimed centrists and the news media, who boosted his career through their malfeasance. Furthermore, the forces that brought Ryan to a position of power are the same forces that have brought America to the edge of a constitutional crisis.

About Ryan: Incredibly, I’m seeing some news reports about his exit that portray him as a serious policy wonk and fiscal hawk who, sadly, found himself unable to fulfill his mission in the Trump era. Unbelievable.

Look, the single animating principle of everything Ryan did and proposed was to comfort the comfortable while afflicting the afflicted. Can anyone name a single instance in which his supposed concern about the deficit made him willing to impose any burden on the wealthy, in which his supposed compassion made him willing to improve the lives of the poor? Remember, he voted against the Simpson-Bowles debt commission proposal not because of its real flaws, but because it would raise taxes and fail to repeal Obamacare.

And his “deficit reduction” proposals were always frauds. The revenue loss from tax cuts always exceeded any explicit spending cuts, so the pretense of fiscal responsibility came entirely from “magic asterisks”: extra revenue from closing unspecified loopholes, reduced spending from cutting unspecified programs. I called him a flimflam man back in 2010, and nothing he has done since has called that judgment into question.

So how did such an obvious con artist get a reputation for seriousness and fiscal probity? Basically, he was the beneficiary of ideological affirmative action...


If they'd asked Brother Charlie Pierce, he'd have told them:


Once Upon A Time, There Was A Zombie-Eyed Granny Starver

I swear, it is harder to get the members of our courtier press to give up their fairy tales than it is to get someone off smack. By all reasonable measures, Paul Ryan, the zombie-eyed granny starver from the state of Wisconsin and first runner-up in the most recent vice-presidential pageant, should be a spent force in our politics. Every time he produces a "budget," actual economists collapse in helpless laughter and other Republicans hide behind the drapes. As a vice-presidential candidate, Joe Biden made him look like a child, and Ryan was unable even to carry his own precinct for the Republican ticket. However, that is not to reckon with his army of Beltway acolytes from both sides of the aisle -- And, yes, young Ezra Klein, I am looking at you -- and their undying desire to rehabilitate their imaginary friends.

Hell, if they'd asked me I would have told them that ever since Paul Ryan came on the scene still glossy with the albumen from his Koch Brothers birthing chamber, has been a soulless, lying Randite killbot.

But the Very Serious men and women of the Beltway simply would not hear of it for the simple reason that if Ryan really was the very best GOP could field, and if he really was nothing more than a bunco artist whose basic arithmetic never fooled anyone but the rubes and the pundits, then all the scary thing the Left had been saying about the Right all along -- about the GOP being a dungheap of con-men, racists, imbeciles and lunatics coated with a thing lacquer of respectability -- might actually be...

No!No!No!No!No!   So much better and safer to chew David Brooks columns into a fine pulp --

The country lacked that leadership until today. Today, Paul Ryan, the Republican chairman of the House Budget Committee, is scheduled to release the most comprehensive and most courageous budget reform proposal any of us have seen in our lifetimes. Ryan is expected to leap into the vacuum left by the president’s passivity. The Ryan budget will not be enacted this year, but it will immediately reframe the domestic policy debate.


His proposal will set the standard of seriousness for anybody who wants to play in this discussion. It will become the 2012 Republican platform, no matter who is the nominee. Any candidate hoping to win that nomination will have to be able to talk about government programs with this degree of specificity, so it will improve the G.O.P. primary race.

-- stuff their ears with it, and run in circles intoning the Magic Conjure Words "Grand Bargain!" than to entertain such career-threatening heresies.

Thus is has finally, hilariously come to pass that Ryan's former hype-men --

When Ryan appeared on MSNBC's "Morning Joe," he was interrupted several times to accept more praise. "Let us stop right now and commend him," said host Joe Scarborough, who served with Ryan in the House from 1999 to 2001. "He's in a leadership position," said New York Times financial reporter Andrew Ross Sorkin. "He's come out with a plan, which is more than the Democrats can say."

-- who have aided and abetting him every step along the way --

“He was the great budget reformer,” Charlie Sykes, a former Wisconsin radio host and friend of Ryan’s who broke with him over the election of Donald Trump, said. “He was the guy that got the Republican Party to take entitlement reform and debt reduction seriously.”

-- whatever happened to their Medicare-gutting wunderkind.

Counterposed against [Peter] Wehner’s belief that Ryan is justifiably compromising his values to support Trump is the opinion by former supporter Charlie Sykes that Ryan is infuriatingly compromising his values to support Trump. “I always imagined that there was room for an alternative conservative vision to Trumpism, and Paul Ryan was ideally suited to be that leader of a non-Trumpist conservative Republican Party, but he’s chosen not to assume that role,” Sykes tells the Times. “It’s very disappointing to see he’s become so comfortable as an ally and an enabler of Trump.”

And so, with all the bizarre solemnity of the chimpanzee funeral in Sunset Boulevard --

-- we find those same Very Serious Beltway pundits who have been wrong all along about everything  forced to sit a very uncomfortable shiva for one more Big Lie they had all agreed to pretend was true.

This Is the Way Paul Ryan’s Speakership Ends
The Republican leader is walking away. Don’t ask him about Trump anymore.

...Kevin McCarthy, the House majority leader, told me that Trump and Ryan are “just wired differently, like most people are.” McCarthy, a strategic-minded operator with pillowy hair, has forged a genuine bond with Trump — arguably more so than any other lawmaker. Still, like most elected Republicans, McCarthy treads carefully, wary of poking the orange bear. It’s hard to overemphasize the degree to which Trump lives in the heads of elected Republicans. You get a sense of everyone on edge, waiting for the next tweet to drop — as if a tornado siren should accompany its arrival. When I visited McCarthy at the Capitol, the majority leader kept toggling between on and off the record. I asked McCarthy if he thought Ryan wished he could speak out more forcefully on some things the president does that might offend him.


“On the record or off the record?” McCarthy asked me.


On, I would prefer.


McCarthy paused and proceeded with care. “I think history will say that Paul spoke his own mind,” he said...

At any moment I expect to see a weepy, half-in-the-bag Peggy Noonan show up late and try to throw herself onto the casket.

He must have been a very important chimp indeed.

A ton of money was invested in building the REagan imaginary legacy.

As with Ryan, Tons of Koch brothers profits will go tax free to creating jobs that script another imaginary legacy.
The Ayn Rand fictional novel worshiping and devotion to making fiction policy by Ryan can be summed up in the differences between the fundamental acceptance of the evil socialism of Ayn and Paul.

Where Ayn Rand relied on socialism in the end. Ryan began his life with all the socialized bootstrapping provided by others. Which provided him an education, food, health care A society not familiar of the great depression to pull one self up out of.
Where Ayn never saved for her senior years and always knew the safety net was there for her. Ryan was lathered with socialistic assistance to which he fondled into being the Egore of the wealthiest Dr. Frankenstein(s) and greedily use his position to improve himself on the backs of tax payers from a government job. Ryan never , ever complained of the extravagance of benefits and the health care provided to him by tax payers who are unable to pay for their own.
Ayn Rand favors for the Koch Brothers (or equivalent) never got the socialized coverage from the wealthy she adorned with sainthood. Where Ryan, well he is on the one percent's payroll for life (his kids too).

The lesson of Ayn and Paul when it comes to the evil socialism. It makes a difference to get it early as Ryan did and parlay it as life plays out. Getting that socialism before paying into it. Taking a government job paid by tax payers and making it a lifer effort to not pay in after taking out.

Instead, taking out before paying in. Spending the rest of your life avoiding paying in. The dividends are far more beneficial than the Ayn Rand's avenue of realizing late in life. How she was so willing to swallow those d-e-e-p s-e-ed-e-d ideological values so devoted to. Like the demented religious self flogger whose pain became too much. But the heroic decision of Ayn Rand to stop flogging herself and get that evil socialism she preached should not exist.
Was willing to forgive herself in her dire need. Just no one else.

Ayn and Paul still have that in common.