David Brooks Is a Monster 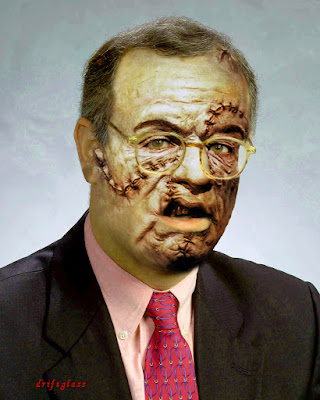 "What monstrosities would walk the streets were some people's faces as unfinished as their minds." -- Eric Hoffer

As I believe I have mentioned once or twice before, at the apex of American punditocracy there sits a monster name Mr. David Brooks.

Yes he is a five-foot tall, slightly stooped myopic dope.  Yes, he writes and speaks almost exclusively in exasperated sighs, marmish scolds and saccharine suck-ups to wealth and power.  Yes, he is the love child of Uriah Heep and Ellsworth Toohey, and when he is not sighing and scolding he is making plaintive, thinly-disguised pleas for the pretty girls at the party to recognize his whinging moral superiority as sexy and cool.

And he is also a monster.

He is a monster who has been employed at heavy expense by The New York Times for the past 14 years.  And based on his output over the past 14 years, it is absolute certain that his longevity has nothing whatsoever to do with any unique insight into our politics, because Mr. David Brooks sucks at politics.  And his extended stay in the penthouse of the Wingnut Welfare state is also not because he is a gifted predictor or explainer of cultural shifts, because Mr. David Brooks sucks at that too.  In fact, he doesn't even pass muster as a barely-competent cub reporter, even when speaking on the one god damn thing about which he should actually have some passing knowledge -- the internal state and direction of his own political party and his own Conservative Movement.  Even on those topics he has been consistently and wildly wrong since forever.

So, the obvious question:  how has Mr. David Brook -- who sucks so comprehensively at even the most minimal standards any normal person would set for America's Most Ubiquitous Conservative Public Intellectual -- continued to enjoy lavishly compensated and utterly unsupervised employment by The New York Times for the past 14 years?

And why are there so legions just like him who have opinion-having jobs-for-life even though they clearly suck at what they do?

Because insightfully predicting or decoding or reporting on the state of our nation is not Mr. Brooks' job.  Mr. Brooks' job is to maintain the bubble in which the Beltway lives by telling them the same lies they desperately wish to believe over and over again. He and his hundreds of imitators are paid to spin happy horseshit fairy tales to comfort their patrons and fellow travelers.  To tell the revelers inside the sealed gates  of Prince Prospero's palace that all is well; that the plague raging outside isn't really that bad.

And even if it is, well it certainly wasn't caused by the revelers themselves, but by the Extremes On Both Sides.

This is also how Mr. Brooks accidentally provides one invaluable service to those of us on the Left who are keenly interested in breaking the corrupt monopoly of the Beltway punditocracy.  Because despite the fact that Mr. Brooks has a long history of being dead-wrong about virtually everything, Mr. Brooks is also a dead-on accurate harbinger of where the rest of the Beltway is, and where it is going.

And where are the Beltway revelers going these days?

The same place they always go -- down to the boat-yard to build yet another ark on which they can once again sail away from another disaster they helped to create.

Where did you think your Crazy Uncle Liberty learned to say "yeahwellbothsidesdoit!" every time you debunk another one of his insane, racist conspiracy theories?

How do you think a two-bit hack like Matthew Dowd managed to build an entire second career for himself as ABC New's chief political analysis slinging bullshit like reporting on Donald Trump's record of sexual predation must always be accompanied by reporting on Hillary Clinton's emails because Both Sides.  Mr. Dowd's original tweet was deleted because Mr. Dowd is a weenie --

-- but he did leave his pissy little rejoinder intact for all of history to see.

paul, i don't take criticism from partisans who only engage from a biased perspective. Try objectivity.
— Matthew Dowd (@matthewjdowd) November 1, 2016

It is because powerful public media corporations long ago chose to hire genteel monsters like Mr. David Brooks to sit at the apex of the American punditocracy and repeat the same, toxic lie over and over and over and over again until that lie became the indestructible context in which every other toxic Conservative lie could flourish.

Which brings us to Mr. Brooks' column in today's New York Times.

And what is the subject of that column?  It literally doesn't matter, because as I have also pointed out once or twice, irrespective of the putative topic of any given column, the purpose of every column is always the same.  To maintain bubble in which the Beltway lives and build the lifeboat on which they will escape retribution for their corrupt complicity by exhorting everyone to blame everything on the Extremes on Both Sides.

So, as demonstration for the rest of the class, let's strip the transient bunting and doodads off of Mr. Brooks column and get a clear look at what's really going on under the hood: 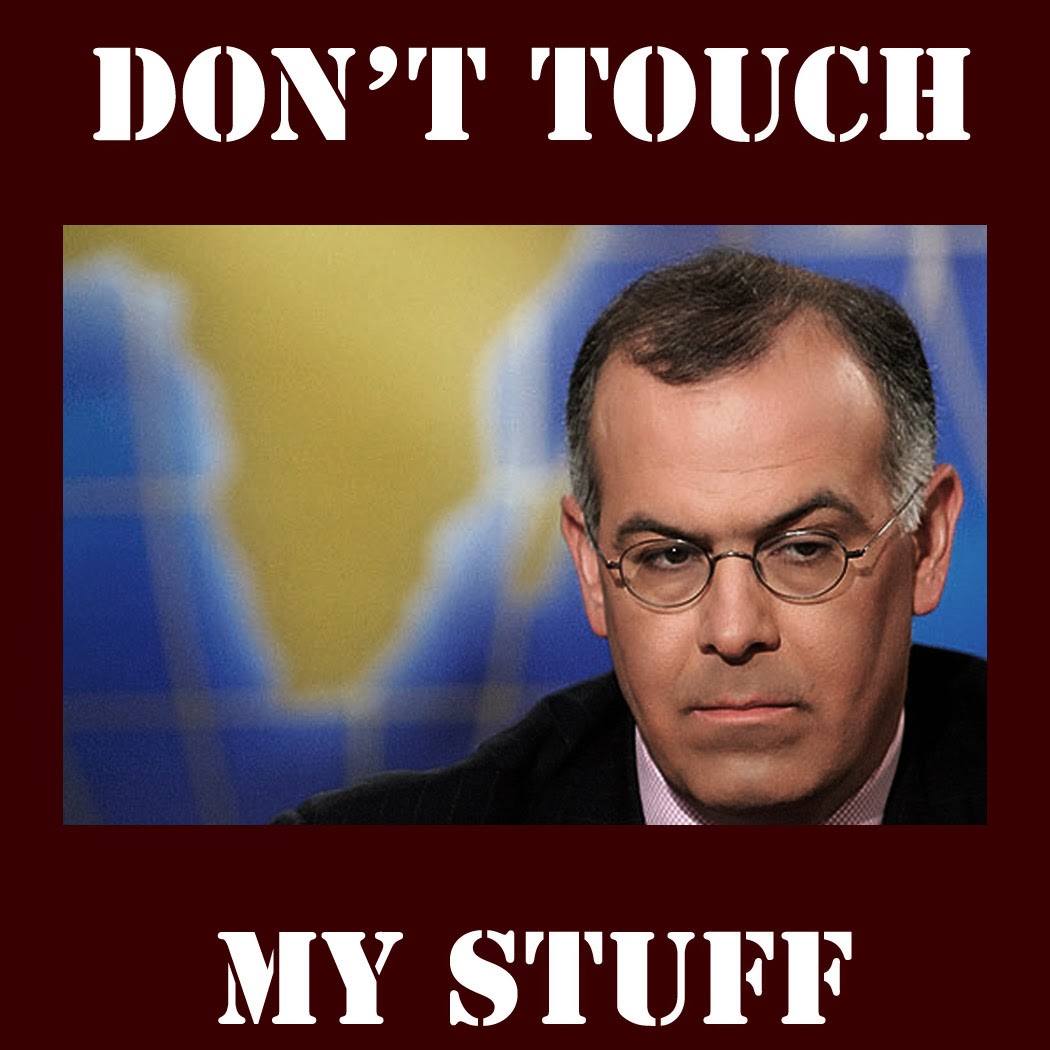 On both left and right, movements have arisen...

The news was especially good for the poor. The share of overall income that went to the poorest fifth increased by 3 percent, while the share that went to the affluent groups did not change. In that year, the poverty rate fell by 1.2 percentage points, the steepest decline since 1999.

Today politics is polarizing to the populist left and the populist right. But if productivity is the problem, what we actually need is a resurgence of the moderates.

The moderate-left policies of Barack Obama must have had something to do with the middle-income gains of the last two years. Moderate Democrats can plausibly argue...

Right now moderates are in retreat. The populist extremes are on the march. But the fact is they are basing their economic and political agendas on a story that is fundamentally untrue.

Mr. David Brooks is a monster The New York Times hired to sit at the very pinnacle of the American opinion-making machine and repeat the most corrosive and dangerous Big Lie of all again and again, year after year after year.

And by that measure, he is the very best at what he does.

UPDATE:  Finally, what about the subject matter that Mr. Brooks used today to flesh out yet another shitty Both Sides Do It column?

This from Center for Economic and Policy Research should surprise no one:

What I find *ahem* interesting is that these attempts to "Both Sides" every issue by the majority white, male punditocracy are ALSO a way of recentering white men. I'm sure it's just a coincidence.

In terms of boots on the ground, direct action done by progressives (at least where I live in SW Florida), it's obvious that the Democratic party as it actually exists is not the party of white men, but rather it is the party of black women, Hispanic women, disabled women, the LGBTQIA+ community, etc. Although some men of all demographics are represented, most of the actual work I've seen being done is being done by women, usually women of colour. A lot of whom are sympathetic to Sanders, but Sanders literally does not represent us, mostly because he's not a fucking Democrat.

So there's that. I guess it's par for the course for these dick-swinging, know-it-all, Both-Sides white male pundits to imagine that only white men could possibly be in charge. On any side.

Oh, jeez. Thanks for always reading D.F. Brooks and paring me the high blood pressure attacks? And, for writing so scathingly about his crap.

3% huh? Now I can get that kidney I've been wanting.

This account of reality, which I’ve certainly repeated, explains why the Democratic Party has moved from the Bill Clinton neoliberal center to the Bernie Sanders left.

You know what I remember, Dave? A hilarious column you wrote just about one year ago in which you predicted that after the election, all the bigots would vanish and then the Bernie Sanders voters and the Donald Trump voters were all going to link hands and form the new Republican Party. Because they're "disaffected," you see, and that's all that matters.

That was cute. You know what's quickly ceasing to be cute? You pretending that what's happening to your party has anything to do with "economic populism." I feel as if the myth of the Economically Anxious White Voter was burned to ash by tiki torches and now exists only in the minds of hack pundits.

One thing for sure is, Brooks can drop a log that will draw flies from afar.

So much there if he is writing to invite criticism per sentence. And there are many.

Let me select one of the jewels here.
"Right now moderates are in retreat. The populist extremes are on the march. But the fact is they are basing their economic and political agendas on a story that is fundamentally untrue."

I have no idea what he attempts to convey when he speaks of "untrue stories of economics". Obviously his notion(s) of economics and political agenda can only exist in the Quantum space and time continuum.
Which only exists in science fiction movies and literature.

So the NYT must employ DFB as a warning what heat stroke and heat exhaustion is capable of? You know, like a public health announcement.

"he is making plaintive, thinly-disguised pleas for the pretty girls at the party to recognize his whinging moral superiority as sexy and cool."

Dear Mr. Brooks: "Don't hold your breath On this planet, 'moral superiority' is called 'sanctimony' in ones frigidest tone of voice."