Pray With Me, Henry! 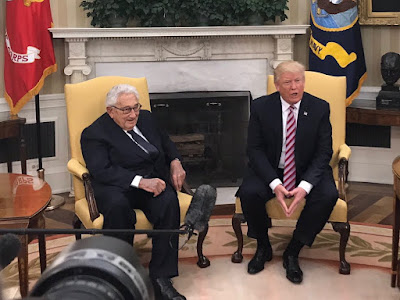 Kissinger:  Veddy well, Mr. President.  What is your favorite prayer?

Trump:  I dunno.  Something something Two Corinthians walk into a bar?  Ha!  The fundies loved that shit!  Picked up 12 million voted from those mooks and all I had to do was not be a chick and promise not to do abortions in the Rose Garden.

Kissinger: I'm not familiar with that one, Mr. President.

Trump: Look, just pick one.  I hear you people know prayers for every fucking thing.  And make it a good one!

Kissinger:  “Because the poor are plundered and the needy groan, I will now arise,” says the LORD. “I will protect them from those who malign them.”

Trump: Not that one!


You know, if you're trying to spin people away from talking about your treasonous ties to Russia and your Nixonian levels of obstruction and dishonesty, meeting back-to-back with Henry Kissinger and your Russian handlers --

-- the day after you sacked the head of the FBI who was investigating your treasonous ties to Russia is so pandimensionally demented and delusional that the only words I have are...

And over at Faux News currently, the loose assortment of cosmetically enhanced fundies and imbeciles, who all have the scent of Dolt45's wee cock on their breaths, are all deflecting saying how a special prosecutor is indeed needed, not for Derp Führer's noted collusion with the Russians, but for HRC's possible flagrant violation of the Espionage Act.

Do not expect any concerns from the republican majorities over Trump's possible treasonous ties with Putin.
Trump, Chaffetz, Nunes, Ryan, McConnell, Bannon all say there is no connection between Flynn-Putin and Trump. And Sean Spicer "colaberates" that tale. I understand Spicey is the next best trustworthy word only after the Trump Tweets.

What republican House and Senate committees need to find out is, Who the hell leaked the story that Comey was fired.,,!

I mean, Comey was in L.A. on stage speaking to law enforcement. When someone noticed on the TV (behind Comey) was anouncing Comey's firing.

Republicans demand to know who leaked this to the press?

Who put the TV in that speaking room?

How did they know what channel to set the TV on for that news report of Comey fired?

Need to get to the bottom of this. Ready the cells at GITMO and moisten the water boards.

I do declare! the honorable Jeff Sessions who can keep his word. Like when he said He recuses himself, After being caught lying under oath in his confirmation hearing).. Guess the President signed an executive order over riding recusals.
Of maybe Sessions is still the honorable man because he had his fingers crossed behind his back when he put his honorable reputation on the line and recused.
More so,
comey requested additional funding for the Russia-Putin express investigation just prior to his being fired from the Apprentice and Meat Loaf with Gary Busey getting the nod to stay on.
Is that funding approved?

So who would give you confidence tin replacing Comey right now?

Kissinger!!???! I thought that wretched meatbag died decades ago in a bamboo cage somewhere near the Cambodian/Laotian border. Bad monkey meat did him in~a slow and painful demise.
O dear, pardon me- I guess that was what should have happened in Poetic Justice World, and we sure as fuck ain't living there.

"Once you've been to Cambodia, you'll never stop wanting to beat Henry Kissinger to death with your bare hands. You will never again be able to open a newspaper and read about that treacherous, prevaricating, murderous scumbag sitting down for a nice chat with Charlie Rose or attending some black-tie affair for a new glossy magazine without choking. Witness what Henry did in Cambodia -- the fruits of his genius for statesmanship -- and you will never understand why he's not sitting in the dock at The Hague next to Milošević. While Henry continues to nibble nori rolls and remaki at A-list parties, Cambodia, the neutral nation he secretly and illegally bombed, invaded, undermined, and then threw to the dogs, is still trying to raise itself up on its one remaining leg."
-- Anthony Bourdain, A Cook's Tour: in search of the perfect meal. New York: Bloomsbury, 2001