Mood? What has mood to do with it? You fight when the necessity arises — no matter the mood! Mood's a thing for cattle or making love or playing the baliset. It's not for fighting.

Yet, there's a place where no Beltway Hack Truthsayer can see. We are repelled by it, terrorized. It is said a man will come one day and find in the gift of the drug his inward eye. He will look where we cannot...

Yes, once again we must travel to that place that scares this living shit out of every Beltway Hack right.  We must part the veil of time and peer into the mysteries of Not Very Long Ago At All.

Excerpted from "935 LIES: The Future Of Truth and the Decline of America's Moral Integrity" are available at The Moyers Report, but the author specifies that no excerpt can be reprinted without the permission of the publisher, so you should go and read about it in detail here.  The upshot of the book is...
If you go push slightly deeper into the forgotten realm of Not Very Long Ago At All you find that the people who eagerly called us all traitors and lined up behind Bush Administration lies about Iraq, WMD and al Qaeda (and deficits, and activist judges, and unfettered executive authority, and "czars" and on and on and on) were the very same people who very loudly believed the polar opposite of every bit of this when Bill Clinton was president.

See, this is the context in which Liberals are operating today -- a context in which it was perfectly clear to anyone all the way back in 1994 that the GOP had become a mob of reprogrammable Orwellian meat-puppets, being led around by their rage and racism and malignant ignorance by a gang of lying demagogues and grifters.

A context in which it was perfectly clear that the mainstream media had decided that it was not in their financial interest to speak these terrible truths out loud.

It was the moment when the things Republicans were starting to say and do right out in public were so wildly at odds with the Both Siderist fairy tales the mainstream media sells its customers that the past itself became a place which repelled and terrorized them so deeply that only Liberals dare to speak of it.

Which is why what happened next was so appallingly predictable.

With the election of Barack Obama, the Republican Party completely lost what was left of its mind and did the only thing it knew how to do: reverse every one of it's alleged "principles" 180 degrees overnight.

Once again, the same meatheads who never gave a shit about Bush Administration lies about Iraq, WMD and al Qaeda and deficits and activist judges and unfettered executive authority and "czars" and on and on and on were flooding into the streets bellowing Hate Radio programmed nonsense.  Of course, in order to avoid any inconvenient questions about their monumental hypocrisy, this time they put on funny hats, called themselves "independents" and swore they'd never even heard of George Bush, but the cow-dumb mobs and their paint-by-numbers hysterics never change.

And OMFG deficits! And OMFG czars!   And OMFG Executive Orders!

Of course, it was impossible for the mainstream media to speak honestly about any of this without straying into the terrifying land of  Not Very Long Ago At All, which is why, during this period, knee-jerk Beltway Both Siderism was elevated from a toxic business model to a depraved cult, and The Beltway Iron Rule of David Brooks and The Gingrich Rules became holy writ, enforced with grim relentlessness.

And for eight year, every overt act of Republican sabotage was shrugged off by the Beltway as "the system" being corrupt and by "the extremes on Both Sides" which could have been avoided if only President Obama would lead!

In other words, it was eight years during which the media (which was now rotten from top to bottom with former Bush Administration speech writers, toadies and water boys) let the Right get away with more and more brazen lies and openly treasonous behaviors while ever more aggressively marginalizing the dirty Liberals who were warning (just as they had in 1994 and 2000 and 2004) that letting Republicans lie with impunity about the disasters they were creating and the conspiracies they were concocting and the scapegoats and straw-men they were inventing would lead to disaster.

Which bring us back to the here-and-now: 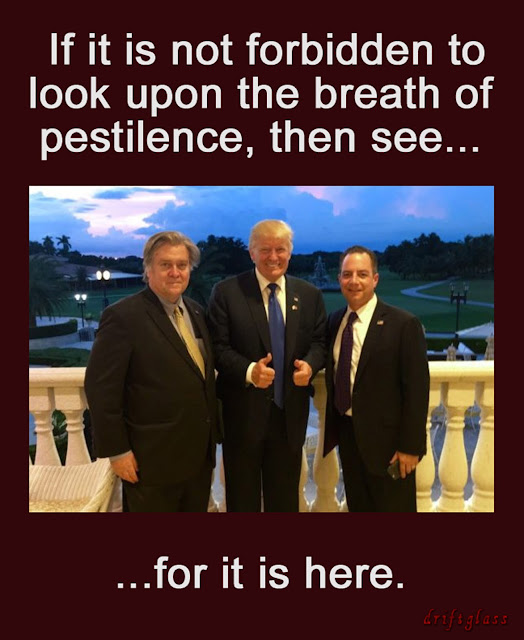 In the here and now, Matthew "I'm an Independent Damn it!" Dowd is still frantically trying to keep the tatters of the Both Sides lie stitched together by parsing the difference between "Trump voters" and "Trump fans".

In the  here and now,  Stephen "Unicellular Fungi" Miller has proved definitively that the shaved-rodent-with-a-slap-of-shoe-polish-on-his-skull look did not die with Ari Fleischer.

Here's a Fun Fact!  Bradd Jaffy is the senior news editor and writer for NBC Nightly News. He is what you might call an "industry insider". I asked Mr. Jaffy via The Twitter Machine about this crazy dream I had in which people in his industry helped resolve this problem by, y'know, not putting known pathological liars on their teevee shows over and over and over and over again.

I do not expect to hear back from Mr. Jaffy.

Also in the here-and-now, people keep paying Andrew "Don't Context Me Bro!" Sullivan to open his mouth and indignantly declaim things which Liberals have been saying for decades about the dire direction the Republican Party was taking.

Here's another Fun Fact!  The price Liberals paid for saying true things out loud about the Republican Party for decades was permanent exile from the polite media company which now welcomes Mr. Sullivan with open arms and checkbooks:

Andrew Sullivan to President Trump: "You keep telling us things that are not true. Can you please stop this?" https://t.co/k6nrvS5kBF
— Reliable Sources (@ReliableSources) February 12, 2017

It's a funny old world out there, and if you want to prosper in it by pointing out blindingly obvious shit about The Bastard President, you'd better not have any of identifiable old-school Liberal stink on ya from the land of  Not Very Long Ago At All.

And speaking of Liberals from back in the day who never got their due. the redoubtable Digby has more from Stephen Miller's shoutycracker gavotte across the Sunday Shows than you probably want to know:

Some people call him the space cowboy

Some call him nutty as a fruitcake. I'm talking about Stephen Miller, formerly of Jeff Sessions' office now of the Trump White House who's having his moment in the sun. He had a big profile in the New York Times and appeared on all the morning shows.  It was so nice to see all the mainstream news people treating this fine fellow with such respect.

He especially loves this, I'm sure:

Dickerson: What have you all learned from this experience with the executive order?

Miller: Well, I think that it's been an important reminder to all Americans that we have a judiciary that has taken far too much power and become in many cases a supreme branch of government ...The end result of this, though is that our opponents, the media, and THE WHOLE WORLD will soon see as we begin to take further actions, that THE POWERS OF THE PRESIDENT to protect our country are very substantial and WILL NOT BE QUESTIONED.

Yes, he actually said those words. I added the all caps because you know in your heart that how it sounded in the original German.

My initial, visceral reaction to seeing this latest in a decades-long line of lying Republican scumbags once again being given a huge public platform was, I admit, less than charitable:

But upon reflection I would just say...

"The end result of this, though is that our opponents, the media, and THE WHOLE WORLD will soon see as we begin to take further actions, that THE POWERS OF THE PRESIDENT to protect our country are very substantial and WILL NOT BE QUESTIONED."

Flashback to Star Wars: A New Hope, and the guys going nuts over their new Death Star.

But President Obama once said that, if you like your health plan, you can keep it. Some people apparently liked their shitty, substandard health plan, so Both Sides are to blame.