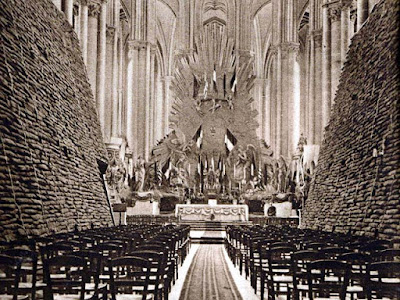 
The incoming, rapid-fire Republican bullshit that The Bastard President has unleashed on our national politics has reached such a toxic cadence so fast that the Quislings of the Beltway High and Holy Cult of Both Siderism have had to resort to fortifying their house of worship with whatever material they can find at hand.  But since there is no usable material at hand, rather than finally folding up their filthy little scam and getting out of town, they are using whatever ridiculous little scraps of "maybe this isn't really that bad" they can pull out of their collective asses.

See if you can find the pattern.

From Ross Douthat in The New York Times:

[Trump] has, to his credit, assembled a reasonably competent cabinet.

From David Brooks, who works for The New York Times, appearing on his weekend PBS gig:

And I have to say a lot of these nominees are not necessarily my cup of tea, but I think they’re clearly within the range. Jeff Sessions has some problematic spots on his history, but he has been a pretty normal, respectable senator, more conservative than a lot of us, but a respectable senator for a long period of time.

So, one could — I think the Democrats are right to protest, but I don’t think he’s so far out of the range of normalcy that he shouldn’t be confirmed.

Betsy DeVos is not the most informed person on education policy, but I have seen her present a few times, and she presents as a pretty respectable, intelligent person who has cared passionately about education and cares about charter schools. The teachers union may not like her, but she’s clearly within the range of Republican policy-makers.

They may have to crawl across a mile of broken glass to do it, but New York Times Conservatives will always find a way to suck Republican dick.
at February 13, 2017

Mr. Blotter is not the most informed person on medicine or anatomy, but I have seen him present a few times, and he presents as a respectable, intelligent person who has cared passionately about medicine and cares about hospitals. The surgeons may not like him, but he's clearly within the range of people qualified to operate an anesthesia machine. I see no reason not to let him help on this triple bypass.

There. Can I have an NYT column?

Gawd...they probably don't need the Church of Bothsides to hold much longer. It is pretty obvious the standing order is: "Hold the line until the tax cuts are passed and signed!"

I assume whomever on PBS was letting Brooks bullshit like that followed up with "Exactly what is "out of range" compared to an education secretary who has no interest in education or an attorney general who doesn't believe due process under the law applies to over half the fucking nation? What about a labor secretary who's racked up more labor violations than any equivalent company in his industry? or the Secretary of State whose backed by a completely different state than the one he's supposed to represent? You have to at least concede Rick Perry was "out of range" or are you just a spineless collaborator, you toad. "

"...may have to crawl across a mile of broken glass" -that's an old Howling Wolf line if I recall-or was it Elmore James? Some fine wordsmithery in any event ~~~

Shorter DFB: I'll be safely out of the way when the buggering starts, so really, why the fuck not?

I think my Overton window needs cleaning. And it's off its hinges again, so might as well saw another hole so it fits just right.

I saw the Friday NewsHour and the part you quoted Bobo was actually grimacing and making the what can I do gif people use. Meanwhile, the usually useless Mark Russell was at least feebly pushing back (he really needs to be replaced by someone much younger). The network TV commentariat needs to be shook up or else everyone will just go online.

Andrea thinks that maybe if Democrats behave themselves their might be a few republicans that come out and criticize Flynn's disastrous folly with VP Pence and some other unidentified person (Reince Priebus) came out and lied for Flynn or Flynn lied to the Pence and Reince who int turn repeated that lie to America.
If they didn't check the facts or fake news from Flynn and just repeated the lie to us.
---They lied to us.

Andrea and Williams share tissue to dry their tears. But only in the 11th hour.

Think we can send Hewitt, Sykes, Steele, Scarborough, DFB and Dowd all to one show and call it the 11th hour..?

In a comment last week I pointed out that Betsy DeVos led a PAC than violated Ohio law and has successfully avoided the sanctions legally imposed by the Ohio Election Commission and upheld by Ohio courts; nevertheless, Rob Portman voted to approve her as Secretary of Education.

Steven Mnuchin was approved as the Secretary of the Treasury. In his confirmation testimony he lied about his company's use of "robo-signing" to rush through foreclosures: court cases here in Ohio have established as fact that his company did use illegal "robo-signing."

Finally it has been learned that Andrew Pudzer, the pick for Secretary of Labor did not even follow labor laws when hiring a housekeeper in his own home. In the past that sort of "oversight" disqualified a candidate. I seem to recall "nannygate" but "Although such revelations have torpedoed past nominees, the chairman of the Senate committee that will consider Puzder’s nomination said he did not think it would be a major issue." Of course when it was Bill Clinton's pick, it was an outrage. https://en.wikipedia.org/wiki/Nannygate

Exactly what would disqualify these people?

Although I recognize it as a futile gesture, calling Senator Portman's DC office on Monday was particularly galling, as one could not even leave a message for the Stewart Percy of the Senate, because the voice mailbox was full. I was astonished when someone answered at the Cincinnati office, but I was able to make my futile plea that Senator Portman consider that these liars and people accused of wage theft are unfit to hold positions of trust.

And it would be nice if someone told David F'king Brooks that we don't all want to be multimillionaires. Many of us would be content being charitable human beings. As perhaps the most humane of our founding fathers put it:

"A wise man will desire no more than he may get lawfully,
use soberly, distribute cheerfully and leave con-tently."
-- Benjamin Franklin

Surely we would be much better off if we had a few of Franklin's "wise men" in government, instead of those who are never satisfied and always are thirsting for "more."

Richard,
You make some good points. Worthy to live by.

Now, other than forced genetic transfusions. How can these notions intercede
the right's "greed is good" and "prosperity Gospel"????

As Portman and other "R" Senators defy their oath of office (to the constitution) and definitely the spirit of the Oath. By obeying loyalty to their political party first.

Plucking the EX gov of Texas from the best gig he could get, Trump took him right out of "Dancing with the Stars" to have him run a Gov. Dept he wanted to abort. A Dept that he had no idea that it regulated Nuclear energy. Bit Rick Perry knew he hated the dept of Energy and it needed to be destroyed.
That was good enough for Trump and the GOP.

Insane hypocrisy,
Paul Ryan on stage asked why defund Planned Parenthood?, He replied it is too controversial and Abortions. He was then reminded that the Hyde Act prevents Gov't funding for abortions. Ryan replied ,"but money is fungible". implying false facts.
But the financial foreign aid America (and Ryan) provides to Israel for defense. And israel has universal health care and it does provide for abortions. That money somehow is not fungible as he says, "all money is fungible".
I am not defending abortion. Ryan is the infowars mirror reflection.

Let us all recall, Bush Adm Agent Starling,
who in a hearing refused to testify because she said she took an oath to the president (then GW Bush). And where do the brain wash these DittoHeads?

David Brooks, in his endorsement of Sessions, has finally copped to his latent racism.