We Control Matter Because We Control The Mind, Ctd 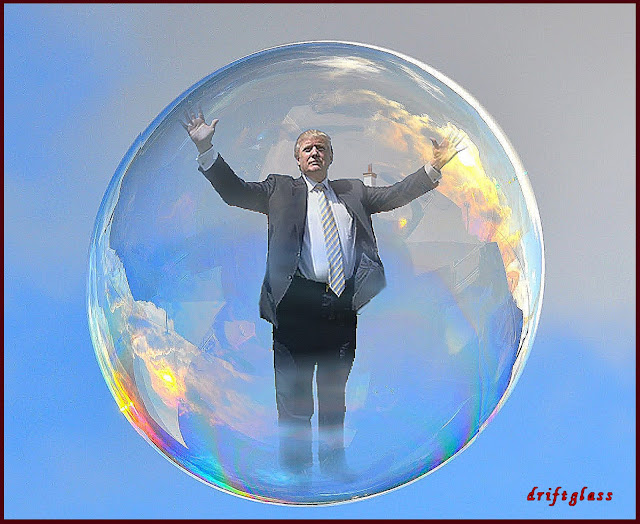 "Reality is inside the skull. You will learn by degrees, Winston. There is nothing that we could not do. Invisibility, levitation -- anything. I could float off this floor like a soap bubble if I wish to. I do not wish to, because the Party does not wish it. You must get rid of those 19th century ideas about the laws of Nature.  We make the laws of Nature."

From Mr. James Fallows in the Atlantic:


‘There’s No Such Thing Anymore, Unfortunately, as Facts’


This morning, straight off the plane from Shanghai, I was on The Diane Rehm Show with Margaret Sullivan, much-missed former Public Editor of the NYT who is now with the WaPo, and Glenn Thrush of Politico. We were talking about how to deal with the unprecedented phenomenon that is Donald Trump, related to the “Trump’s Lies” item I did two days ago.

You can listen to the whole segment here, but I direct your attention to the part starting at time 14:40. That is when Scottie Nell Hughes, Trump stalwart, joins the show to assert that “this is all a matter of opinion” and “there are no such things as facts.”

You can listen again starting at around time 18:30, when I point out one of the specific, small lies of the Trump campaign—that the NFL had joined him in complaining about debate dates, which the NFL immediately denied—and Hughes says: Well, this is also just a matter of opinion...

It should come as absolutely no surprise that the sheer administrative burden of denying each of Donald Trump's hundreds of individual lies should quickly become unsustainable, especially for the bottom-feeders, halfwits and other human flotsam who have sold their soul for a place of privilege at his royal court.

And so, rather than having to spend valuable gibberish polishing each Trumpian turd one at time like some peasant, the new masters of the universe are discovering that a simple, blanket denial of reality itself -- the oldest tool of every petty tyrant in history -- is really the easiest and most efficient way of dealing with the torrent of bullshit that will be coming from Il Douche for the next four years.

As I wrote back in September. once you start to notice that a depressingly large number of our fellow citizens have become reprogrammable Orwellian meat-puppets, the rise of Trump is not hard to understand at all.

Email ThisBlogThis!Share to TwitterShare to FacebookShare to Pinterest
Labels: fallows

Imagine a boot, stamping on a human face - forever.

There are no facts there is only the propaganda which conforms to the MAGA TRUTH of the day.

A slight diversion but one you may appreciate Driftglass: this devastating take-down of DFB's bothsiderism by Jonathan Chait of NY Magazine. http://linkis.com/nymag.com/daily/inte/1AOIc

Reminds me of the origin of "reality based community" (Karl Rove upbraiding Ron Suskind for using facts and logic to arrive at solutions, as opposed to imposing will upon reality).

Which reminded me of a 1980s conversation between a writer/computer guy (me) and a guy in marketing. He claimed there were but two kinds of people who ran the world, those who sold stuff and those who bought stuff, and that the marketing of a thing was all that mattered.

I corrected him, pointing out that a third class, those who actually make things and the machines that run the world, without accurate applied physics/mathematics, etc, people like him would be shit out of luck. The car he drives to make a sale wouldn't run. The product would be un-marketable to all but the most foolish. "We could survive without salesmen. You, on the other hand, would be digging for tubers without us."

And so when Rove and GW Bush & Co. thought to create reality in Iraq, facts came up and bit them in the ass. Facts don't give a shit, and have this unique property of always existing.

Does Gish have a faster speed than "gallop"?

Pablo in the Gazebo said...

Mussolini neglected to mention that corporatism is also a cult.

The original fascist Futurists were much more forthright about this.

The "post-fact" meme reeks of wishful thinking with a myopia chaser.

Sooner or later facts and logic (which have a liberal bias), will debunk any and all of the post-truth propaganda from cheeto jesus and his morally bankrupt grifting acolytes. The only difference is now, as this past election has proven, there are unfortunately numerous people in this country that no matter how many facts you might have to bolster your argument, they will sadly continue to ignore what you have to say or immediately get angry that they are being challenged with what they feel is right.

No, the rise of Trump is not hard to understand, nor should it be surprising. Liberals and Democrats who could not believe this could actually happen, stop believing that people will act for the good of all, that justice will prevail because it is good and right. Justice will not prevail unless we make it prevail. And if you believe they won't get away with again, that the truth will win out, I again refer you to George W Bush. He was the most powerful person on the planet for 8 years, and today he might have well never existed. He is a nonperson. History goes from "Clinton should have taken out bin Laden, to the economy bottomed out under Obama and he gave a bunch of money to the banks." 8 years into the memory hole, and they are fucking _gone. Do those years get discussed on political tv, will there ever be a reckoning? No, they are _gone. Don't think that republicans won't create their own reality, or that the Press won't allow them to do it, or that the reprogrammable golems that would happily apply the boot to the face, forever, won't eat it all up and regurgitate it back up as God's honest truth. We need to start looking at this as the way things actually are, not the way that things 'should' be. 'Should be' just us lost us a tremendously important election, and if we lose the next one, we're in a pretty pickle.

Another passage in 1984 near the section driftglass quotes has to do with memory. In a generation, there will be no one who remembers what actually happened, the truth, the younger generation will have grown up with the MiniTru version, the older generations will have been purged and reprogrammed, and the MiniTru version will be the truth. This is not a metaphor! This is how it works! This is what is happening right now! And if you need to be reminded, we are on the wrong side of this, we are Goldstein.