Don the Con Talks To Murrica About Flags (And Other Scary Wingnut Bedtime Stories): Update 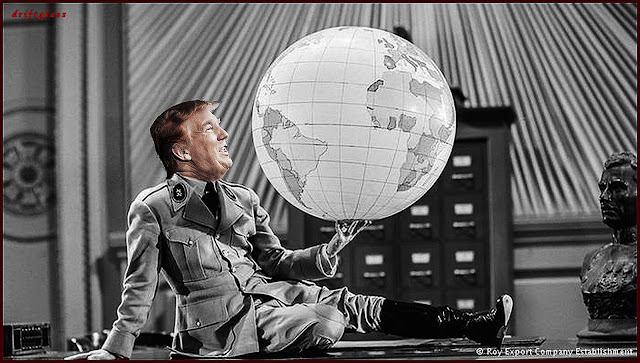 072916 Update:  He is telling exactly this same ridiculous, debunked lie again right now as all the cable stations revert to type and cover him wall-to-wall.  He literally cannot stop himself and he obviously does not have anyone on his staff with the huevos to tell Il Douche that his is shitting the bed again.


Among the many, many, many unhinged lies that issued forth from the lie-hole of Donald J. Trump this morning (including an open plea to the Russian government to hack the United States in order "to find the 30,000 'missing emails from Hillary Clinton’s personal email servers" on order to screw his political opponent) this was oddly my favorite:


“Despite the police platitudes, she’s been a mess,” Trump said. “They don’t have an American flag on the dais until we started complaining..."

Because nothing so clearly demonstrates the direct, main-line connection between the subterranean gibberings of the denizens of the dankest corners of the wingnuttia and the mind of the Republican nominee for president than this kind of throwaway claptrap that litters his ramblings. Because this particular lie exists nowhere except the open digital sewers where Don the Con goes shopping for his "news"(and in 100 future ALL CAPS emails from Crazy Uncle Liberty.)


Several other right-wing web sites known as purveyors of misinformation, such as The Gateway Pundit, Barenaked Islam,and The Daily Caller also published articles reporting that no American flags were present at the DNC:


The Daily Caller is at the Democratic National Convention and it doesn’t look like there are any American flags.

The stage is bland and grey, with no red, white or blue present. A thorough look at the crowd present also turns up no American flags.

For the record, among the many, many other examples here was Bobby Hill singing the national anthem at the opening of the DNC:

Once again and for fuck's sake, will anyone who lists themselves as a "journalist" on their W2's and has access to this lunatic and isn't a hired quisling like Jeffrey Lord please bother to ask him just once where specifically he gets his claptrap.

And when he doesn't answer, ask him again.

Update:  For the record, slandering the patriotism of Democrats by lying about flags has always been one of the go-to lies of the Party of Jefferson Davis.


As the Right made abundantly clear during the 2008 Presidential campaign, there is one and only one true test of a patriot -- one and only Shibboleth for loving the land of the Free and home of the Brave more than the common run of citizen,

Now, I don't pretend to understand all the "science" behind it, but apparently flag pins are to secret America-haters exactly like holy water is to a vampire, or silver is to a werewolf, or questions about what newspaper you read are to Caribou Barbie...


And of course in 2012, the hysterical twats at Fox News were furious that the American Olympics team wasn't nearly flag-wavey enough to meet their standards of patriotism.
at July 29, 2016

Email ThisBlogThis!Share to TwitterShare to FacebookShare to Pinterest
Labels: Trump

I enjoyed his claim that the media didn't cover the protests at the DNC. And no one thought to ask: "Then how do you know about them, Donald?"

I didn't see one flag in that there video. Nor did I see any when the Big Dawg gave his speechifying.

That kid's got some vocal cords.

I seem to recall a similar non-controversy about Obama not wearing the apparently requisite flag pin at some debate or other, which of course conclusively proved beyond a shadow of a doubt that he's a KenyanMuzlinUsurper with no birf sirtiffikeet at all.

And no one will ever call on him on his horse shit because ratings and money.

Of course the instant someone first typed "There are no American Flags on that stage until we said something" there were NO GOD DAMN FLAGS ON THAT FUCKING STAGE for 30-40 percent of the American electorate, regardless of what evidence is brought to the contrary.

I also remember when Obama said he enjoyed egg white omelets and that was reported as he was a F#@, couldn't relate to a SINGLE American, and wouldn't be strong enough on foreign policy to protect the country.

Obama also had the effete elitist Euro-Trash effrontery to eat a burger with Grey Poupon mustard on it.

Just wait'll ole Hillbot gets in. We ain't seed nothin' yet.

'Your flag decal won't get you into heaven anymore...' nor will your flag pin. In fact neither ever would.
In case any goopers or neocon bobbleheads need a remedial Eisenhower was a patriot. Didn't wear a flag pin. No Republican since is/was one.

Not only that, he cannot say the 'e pleb neesta', lest his tongue catch on fire, revealing him to be the Evil One.

To make a very obvious point for Ron Fournier, the level of dishonesty is not the same on both sides. It's breathtaking.