I Will Answer Any Questions... 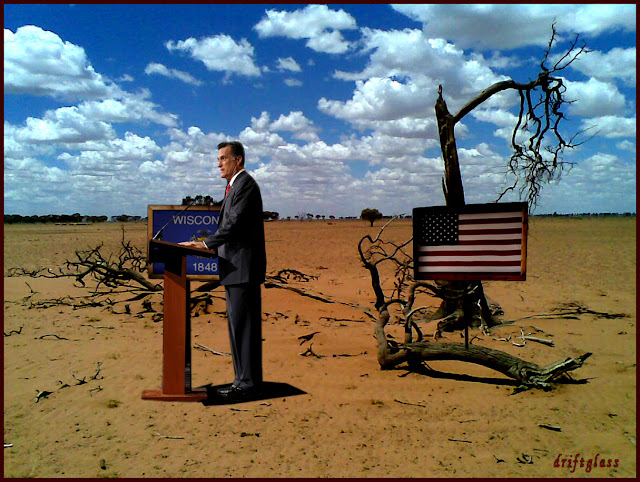 ...except those related to abortion.

And my years at Bain.

Also I will not be answering any questions about my family, my residences or my term as governor of Massachusetts.

So... You're saying Jeff Gannon will be fielding all the questions?

Ask Me No Questions!

Will he answer this one: "Sir, will you restore transparency to the federal government?"

"My name is Willard Mitt Romney. I own a mansion and a yacht. Thank you, and good night."

Watching from Canada ..
with no malice, never any aforthought either...

Kind of hoping Hurrycane Issac might just biblically wash a lot of bizzare and rabid political animals downstream or off into the oily BP Gulf, twards The Ark.. and those faithful Repubnuckians could find succor there, but no TV.. or football.. or bourbon.. but two of every animal, including a truly scary selection of dinosaurs, which we all know walk with MittRyan and all mankind,
or at least quite lately. Ya gots the Newtasorass, the Akinatafuss, surely the Palingotnoclooabuster still stalks the American landscape.

Or his past positions on anything.

And don't confuse him with his own words.

Seems to me that there're plenty of doubts for the big boys to change their minds at the last minute and choose someone other than the proven losers (intellect and otherwise) Rmoney-Lyan.

But it could all just be a very expensive sham performance just as the prior circus acts were, awaiting the deals on all their pet projects they know they'll get from the Big O.

And the sigh of relief the crowd will erupt with after the sideshow ends.

And real life continues even more poorly for the panting crowd.

....And for god's sake don't even think about asking which loopholes we will close to shore up the budget. We totally swear it will not be your mortgage interest. Or your 401k. Or your health insurance payroll deduction. Truuuust us.

You may only ask us why Obama sucks so bad. And if you ask us anything else, the answer will still be 'because Obama sucks'. Play along and win a free date with Bulldog in Tampa.

How about a question on Mr. Ryan's religion? You and Mr. Ryan come from different faith traditions which each claim to be the exclusive path to salvation. So which one of you is going to hell? More generally, how will the theocratic police state your base believes you will build for them be structured? Will it be a Catholic, Protestant, or Mormon theocracy? Or will their be exclusive districts for each, taking a cue from our successfull nation building project in Iraq? Will every public and private action taken by citizens be informed by these sectarian identities, as in Northern Ireland? Iraq and Northern Ireland are obviously models of good governance. Please tell us what life in the City On A Hill will be like.