That Glib and Oily Art 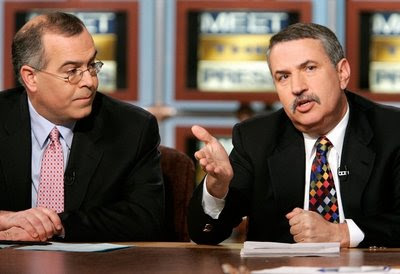 To speak and purpose not.


Your humble scrivener wrote this over seven years ago:

BoBo, do you know what Centrism actually looks like? It looks remarkably like the Democratic Party with Bill Clinton in the White House. Center-right, to be accurate and y’all even got NAFTA, GAT, Welfare Reform and a bunch of other goodies from the Eternal Republican Wish List thrown in to the deal.

And as a big “Thank You”, you blocked 35% of his judicial nominees (a little statistic that Mr. Fair ‘n Balanced very conspicuously omitted because it made his whole thesis look like the puddle of damp excreta that it actually is), and are now raving that Dems blocking 4% is somehow an unprecedented breaching of “another civilizing custom”.

"The fact is, the entire country is trapped. Harry Blackmun and his colleagues suppressed that democratic abortion debate the nation needs to have. The poisons have been building ever since. You can complain about the incivility of politics, but you can't stop the escalation of conflict in the middle. You have to kill it at the root. Unless Roe v. Wade is overturned, politics will never get better. "

“Fact is” you wormy little Quisling, the Dems spent the 90’s compromising their fool asses off – precisely like it says right here on the prescription that Dr. BoBo wrote out for us.

For their troubles they got Newt Gingrich and his GOPAC Little Red Hatespeech Book launching acarefully planned, deliberately executed verbal blitzkrieg again the Democratic Party. Acoordinated national campaign of that came with a detailed list of words (Free In Every Box of Cracka’ Jacks!) to be used to demonization and humiliate Democrats at every opportunity.

For their troubles we get Tom DeLay rising like the Asshole Kraken from the absolute depths of bigoted-ignorant-demagogue-politics to become a proud leader of your party. And trailing behind him like the smelly brown tail of a feculent comet, all the rest of the escapees from “The Island of Doctor Moreau” that own and operate the GOP.

For their troubles they got the Democratic President of the United States hunted like a wild animal for seven years – for sport – by Republicans riding along on a rhetorical tsumani of Absolute Ethical Standards. Virtually shutting the country down to impeach him for a b-l-o-w-j-o-b, not because you wanted to -- Heavens No! -- but because any hint of impropriety on the part of any president need to be ferreted out, no matter the cost.

Well the per-capita number of Ferrets in your party has certainly skyrocketed since then, so where are all the investigations of the possible High Crimes and Misdemeanors of the administration of George Walker Bush? Where are the Select Committees? The Special Prosecutors with unlimited lines of credit? Has Cheney been excoriated and rebuked for secretly rigging up a new energy policy? Has GW been subpoenaed yet? Has Rice? Perle?

Of course not, BoBo, because your party is infested top to bottom with CHUDS and poltroons, liars and hypocrites, Elmer Gantrys and Jeff Gannons. You already own the Executive and Legislative branches and the only thing standing between them and the Jesusland, Inc. fantasy that you all cream over is the courts…

…so let’s expend a Brooksie columns beating up on judges by cowardly proxy. Hey, how about Liberal Supreme Court Judges? Who are dead? And how about we try to throw the dogs off the scent by waving the word “Abortion” around and seeing if that’ll confuse them.

Face it, BoBo in the sharp illumination of your party’s own words and deeds, you sound idiotic, but hey, if you really want to disarm and play nice, fine. And since we spent a decade trying to find compromise with the "Napalm a Progressive for Christ" wing of your party (now better known now simple as The Republicans) and got our skulls bashed in with big, old GOP crowbars for our trouble,how about you going first, and we’ll meet you at the half-way point.

The REAL halfway point, which at the rate your party has being sprinting into the doughy arms of the Fundamentalists, is now about nine billion miles to your left.


(For the record, during the last seven years I have probably written +1,000 essays on this subject from every imaginable angle.)

Seven years later, Norman Ornstein and Thomas E. Mann have written a column in the Washington Post  that says interesting things like this.


"The GOP has become an insurgent outlier in American politics. It is ideologically extreme; scornful of compromise; unmoved by conventional understanding of facts, evidence and science; and dismissive of the legitimacy of its political opposition."


“Both sides do it” or “There is plenty of blame to go around” are the traditional refuges for an American news media intent on proving its lack of bias, while political scientists prefer generality and neutrality when discussing partisan polarization. Many self-styled bipartisan groups, in their search for common ground, propose solutions that move both sides to the center, a strategy that is simply untenable when one side is so far out of reach."


The collective efforts of Messers Ornstein and Mann have been received as such a searing act of revelatory daring -- such a thunderclap bruising, bracing honesty -- that Jay Rosen is said to believe this to be* --

But Jesus Christ on a milk carton, gentlemen, what the Hell took you so long?


*(Had to report this second-hand because for some reason Jay has blocked me on Twitter.)

"Hm. Call me crazy, but it's almost as if the republicans have begun to act a little bit unreasonably... Squirrel!"

An interesting fact from last week's NOVA about the sun: Because the sun's center is so dense, protons released in its core take 100,000 years to reach its surface.

Villager journalists are dense, too.

Truth be told, as a Canuckistanian I inserted the (American) thing into the Rosen quote...

And only a thousand Drifty?

I reckon there were probably at least two thousand surefire comments before you even left Mr. Gilliard's most excellent comment salon and wordsmith emporium.

To put it another way:
http://doghouseriley.blogspot.com/2012/04/lets-just-say-it-thirty-years-late-is.html

I heard last week that there are 450 right wing pundits now working the airwaves. This number surely doesn't include Brooks et al.

i'm not a wordsmith such as yourself but simply put - you're the best and an inspiration. truth-telling does not win 1st place in punditry nor religion but for those who have values,morals and (oddly enough)compassion it delves deep and leaves a lasting impression. and- you do it with extreme creativity and charm. in that may be some consolation for being an unrecognized voice in the wilderness of assholes who have the mic.stableat

Like Fiddlin' Bill says...go see. Yes, blinding flash of the obvious from a couple of fuckin' Villagers. Dems won't notice it and Republicans won't believe it - after all why would they believe anything co-authored by someone from Brookings Institute? But the salient point is that both Hull and Ornstein have been around since the Carter Adminstration, for Chrissakes. And they're just now getting around to noticing the Republican party went over the high side some thirty years ago? It continues to careen downhill, crushing anyone who gets in the way? And oh yeah, feels victimized by everybody in the process?

The liberal media, I ask you. They're just now figuring this out? And media reaction to the bloody column? You'd think the Post had hired Matt Taibbi in place of George fucking Will, which is actually a pretty meritorious idea. Be that as it may, it amounts to Villager wanking. The people who know and believe all this don't need more evidence, while the people who don't want to believe it...won't believe it no matter how much evidence is presented. Indeed, there are numerous folks out there who do believe it, and will say it's a good idea, because someone has to keep the Dems and the Kenyan imposter busy while demolishing what's left of the New Deal. Oh yes, let's not forget putting women in their place and keeping brown people in their place, or maybe it's the other way around.