While You Were Busy 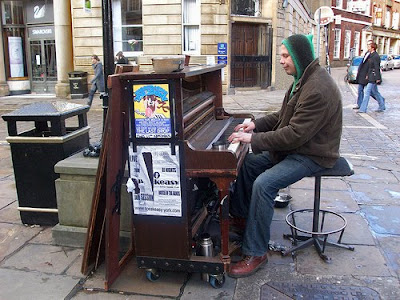 busking for nickles and shaking out the sofa cushions one more time looking for a few pfennigs for good causes, here is what Team Evil was up to.

Seven foundations and wealthy donors gave Islamophobic groups $42.6M from 2001 through 2009, according to a new report from the Center for American Progress.

"Sometimes the money flowing from these foundations and their donors is clearly designed to promote Islamophobia, but more often the support provided is for general purpose use, which the think tanks and grassroots organizations then put to use on their primary purpose -- spreading their messages of hate and fear as far and wide as they can," the report says.


On other words, the Usual Suspects:

Showering cash on the Usual Suspects:

And what does this money fund? Well, here’s one of many cases in point: Last July, former Speaker of the House of Representatives Newt Gingrich warned a conservative audience at the American Enterprise Institute that the Islamic practice of Sharia was “a mortal threat to the survival of freedom in the United States and in the world as we know it.” Gingrich went on to claim that “Sharia in its natural form has principles and punishments totally abhorrent to the Western world.”

Sharia, or Muslim religious code, includes practices such as charitable giving, prayer, and honoring one’s parents—precepts virtually identical to those of Christianity and Judaism. But Gingrich and other conservatives promote alarmist notions about a nearly 1,500-year-old religion for a variety of sinister political, financial, and ideological motives. In his remarks that day, Gingrich mimicked the language of conservative analyst Andrew McCarthy, who co-wrote a report calling Sharia “the preeminent totalitarian threat of our time.” Such similarities in language are no accident. Look no further than the organization that released McCarthy’s anti-Sharia report: the aforementioned Center for Security Policy, which is a central hub of the anti-Muslim network and an active promoter of anti- Sharia messaging and anti-Muslim rhetoric.

In fact, CSP is a key source for right-wing politicians, pundits, and grassroots organizations, providing them with a steady stream of reports mischaracterizing Islam and warnings about the dangers of Islam and American Muslims. Operating under the leadership of Frank Gaffney, the organization is funded by a small number of foundations and donors with a deep understanding of how to influence U.S. politics by promoting highly alarming threats to our national security. CSP is joined by other anti-Muslim organizations in this lucrative business, such as Stop Islamization of America and the Society of Americans for National Existence. Many of the leaders of these organizations are well-schooled in the art of getting attention in the press, particularly Fox News, The Wall Street Journal editorial pages, The Washington Times, and a variety of right-wing websites and radio outlets.

Misinformation experts such as Gaffney consult and work with such right-wing grassroots organizations as ACT! for America and the Eagle Forum, as well as religious right groups such as the Faith and Freedom Coalition and American Family Association, to spread their message. Speaking at their conferences, writing on their websites, and appearing on their radio shows, these experts rail against Islam and cast suspicion on American Muslims. Much of their propaganda gets churned into fundraising appeals by grassroots and religious right groups. The money they raise then enters the political process and helps fund ads supporting politicians who echo alarmist warnings and sponsor anti-Muslim attacks.
...

In the interest of strict fairness, I'm sure not all of these deeply depraved assholes are in the Hate Business only for the money.

I'm sure that, if it came right down to it, many of them sincerely loathe this country enough that they would lie and slander tirelessly to subvert and destroy it for free.
at August 26, 2011

Email ThisBlogThis!Share to TwitterShare to FacebookShare to Pinterest
Labels: Hate Media, Selling blood in a buyers market, The Management Secrets of Charles Manson

Gotta give the sheeple convenient scapegoats to hate. Keep them scared stupid so they don't notice who's picking their pockets.

The demise of communism was such a sad time for the authoritarian fearmongers, because without a big fat hate-target to absorb their bile, their whole ideology begins to poison itself. How fortunate that they found convenient new hate targets to preoccupy their army of willfully-ignorant parochial dumbasses.

to be perfectly fair, Lynde and Harry Bradley are dead, and their foundation coasts on the bile and venom of their heirs and board;

But as a citizen of Milwaukee, that money has resulted in teh Bradley Center (although it is an unremarkable piece of architecture) and Bradley Tech high school (much better as architecture) and those both have been benefits to our city....

I admit I am conflicted, knowing what kind of shenanigans the Foundation does in other ways.

However, I'm pretty sure Newt Gingrich is in it solely for the money.

What's really creepy about that list? Most of them are also NPR sponsors.

What do you suppose they are getting from NPR in exchange? Guaranteed guest spots for their "special friends"? Wouldn't surprise me.