Mein Führer! I can walk! 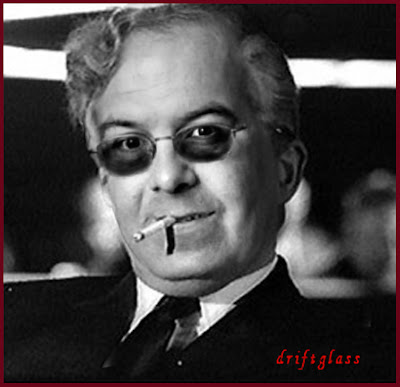 Now that his tax cuts are safely in the bank, David Brooks has once again learned to stop worrying and love Budget Cuts.

Of course, Republicans are slightly too wanton to do it right, and Democrats are (apparently) too timid or fuzzy-headed or (one assumes) beholden to dirty Commie Labor Unions, so as with virtually every other column he has ever written (that wasn't cheerleader a failed war, boostering a failed economic policy, loving up some new GOP phenom (John Thune) or faithful manservant (Scooter Libby), or desperately trying to distance himself from the brutal, bloody catastrophe of a Conservative Movement he helped create and to which he owes his entire career)...once again the New York Time's Republican Goldilocks finds the perfect solution exactly in the imaginary middle.

Better hurry up and go look now, because once the NYT Paywall Blast Shield goes up (again) you won't be able to sup on the mutton of Mr. Brooks' genius for free anymore!

Marie Davis Burns (thx for the catch. anon) from Reality Chex carves the roast for us today in the NYT Comment Section:

We're in the mess we're in because of people like you, Mr. Brooks -- people who helped promote the Republican agenda & helped get Republicans elected. Now, come to find out, as if no one had ever mentioned it before (oh, wait, it was spelled out in the Republican campaign policy guide "Plague to America"), they have taken a cleaver to programs that matter to average Americans but won't help Republicans get more votes in 2012.

Now you're trying to redecorate the barn after the horse has trashed it. Too little, too late.

And no use making the excuse, "Well, I didn't want some of those ultra-right-wingers to win." You played right into their hands. You've written more than one column extolling the virtues of careless "moderate" Republicans like Paul "Privatize Social Security" Ryan and Mitch "Destroy Public Unions" Daniels. There's nothing moderate about taking us back to the early 20th century. (There's plenty that immoral about it.) The only substantial difference between so-called "moderate" Republicans & tea-partiers is that moderates clean up a little better. They couch their anti-American policies in fancier rhetoric. And charts. But they're all cut from the same cloth -- cut back on programs, rights and wages for middle-income Americans & decrease responsibilities for the rich -- lower their taxes, privatize, deregulate, get "the government" off their backs.

Today in a speech to the nation's governors, President Obama -- who I keep reminding myself is a Democrat -- boasted that his budget proposal -- the one you so admire -- had the lowest ratio to gross domestic product since the administration of Dwight Eisenhower. This is a shameful admission coming from any politician -- much less from a self-described Democrat -- when we are trying to pull out of a recession brought on by irresponsible banksters and their equally irresponsible government "regulators." President Obama talked about painful cuts when he should have been talking about painful expenditures and painful new taxes on big corporations & the much-put-upon rich.

You brought us these people who are ruining the nation, Mr. Brooks. You have a lot of nerve suddenly adopting the pretense that you wish they would behave a little better. They don't have to, thanks to you and other irresponsible members of the media who either promoted them or failed to stand up to them.

You are watching the Decline and Fall of America, sponsored by the Republican party & a complicit Fourth Estate.

"Gemli" from Boston also does a fine job of driving in the spikes down among the dozens of NYT commenters. all of whom seem to know vastly more about the history of the Republican Fiasco Years and Mr. Brooks' role in them than does Mr. Brooks:

When I hear conservatives talk about the economy I am reminded of a type of stroke that makes the sufferer unable to recognize half of their body. Mr. Brooks can’t see his left side, that’s for sure. Only the right, deficit-cutting side is operational. Only by starving the old can the young thrive. Only by crushing unions can workers flourish. Instead of funding schools, we have to find ways to creatively strangle their resources.

Conservatives cannot even mention raising revenue. They physically can’t say the words, much less consider the actual possibility. They’re as afraid of t-a-x as they are of s-e-x, another taboo subject that makes them sweat and mutter and make up crazy medieval punishments for things like family planning, unwed mothers, and gay people. Make everybody hurt, that’s their motto.

You may remember that conservatives destroyed the economy. But we can’t talk about responsibility for the meltdown, because apparently that’s somehow controlled by the left side of their brains. We can’t talk about the wars, either, which put untold billions into the hands of war profiteers that could have been used to build schools by the hundreds.

And so now, after years of Republican's running completely amok, running up deficits the likes of which the country had never seen before and driving the global economy to the brink of ruin without a single fucking peep from the Pig People Base, the minute the black Democrat from Chicago takes the oath of office we are now suddenly in a budget cutting arms race and the same people who never uttered a single peep about budgets when George W. Bush was bleeding the treasury white are now vying to see who can kick the crap out of the poor, the weak and the sick the hardest.

Is it just here, or is the Democratic Underground site undergoing a denial of service attack!!?? Can't get through at all! I'm in Erie Pa.

To be fair the GOP was kicking the crap out of the poor, weak, old, and sick during the Bush years. They were just using a different rationale.

I always love the smell of the charnel house first thing in the morning. Thanks for all you do!

sorry for going off topic. Driftglass blog as always is pure genius. But this is a little scary. It seems there isn't even any info about this, though it's all over the FR bulletin boards.

I believe Marie's name is burns.

Making "tough choices" about the deficit never includes raising taxes. Never. It's the only government action the rich are not immune to.

In a corollary to the general process of further enriching the hyper-rich, here, a vanishingly small fraction of the budget is proposed for cutting that effects vast numbers of the "little people." And, the supreme hypocrisy is apparent as critical cuts are made not only to programs for infants but EVEN to the second-most important class (after the hyper-rich) THE FETUS?!?

What can we do (besides write [very well I may add])about about the Right's desire to make the US a third-world oligarchy?

Every day I wake up thinking/hoping some random politician will start talking about what you, Robert Reich, Jon Stewart and Stephen Colbert are talking about: taxing the rich at Clinton-era rates, providing those who ACTUALLY NEED HELP with help, and--more broadly--waking up the Pig People to what exactly they are voting for.

But instead, everyday, I wake up and there is no such person. Instead I see Erick Erickson on CNN telling people that the Bankers Are Good People or anyone on Fox saying that it's the Democrats starting a class war. It's like a much more depressing version of Groundhog's Day with all of us with a functioning intellect as Bill Murray.

I listen to The Professional Left podcast every week and so I understand that these people, as you say, "cannot be reasoned with" so what other option(s) do we have? Do we just have to wait until the Right fucks up even more than answering a prank call, or is found on Craigslist with an under-aged gerbil?

Obviously, what I'm asking is: What can we do to actually take back our country?

Hmm, that could be the next one...

How a Corporate Whore like David Brooks can look in the mirror without hurling is beyond me.

And they could SHAME a big chunk of the FFR into signing on to the Train to Heaven.

Plus, Ordinary People love schmoozing with The FFR, even Tea-Baggers, who are So Sure they're Almost There!

Hey, it's a thought. I can't just sit here and cry in my Metamucil.

One of your best, Drift, and that takes in a lot of territory...all the way back to Bloomie. :o)

They are not "conservative" they are authoritarians. Please don't use frank luntz's chosen terms for these radicals.

Silly liberals ... you're just not seeing The Big Picture here!

The Real(-ly Rich) People just want to Imagineer yet another massive free lunch on your tab like they did way way back in 2008, but they can't pull it off if those deliciously defenseless public coffers are empty - so lube up & grab your ankles if you love America!

Oh, also, "want" may not be a strong enough term above: given the state of the bond & real estate markets, perhaps "need" is more apropos.

Nicely done - and nice when other folks give you a break. More on Brooks recent propaganda, if you missed them:

The only value in a DFB column is the certainty of brilliant demolition of same in the comments--and another ferocious Driftglass smackdown.