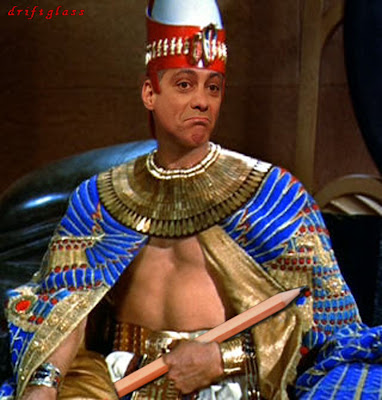 Neck-stab half the fuckin' staff and throw 'em the fuck out with the trash.

Doesn't matter which half: the ones you neck-stab stop being a problem; the ones you spare will be so grateful you didn't neck-stab 'em that you can work 'em until they drop in their traces.

Anybody has a problem with that, they can fuckin' quit and go sell irregular tube socks on an I-94 on-ramp, 'cause they'll never work a real job in my fuckin' city ever again.

Sadly, the background for this Lesson can be found on all sides and in every Chicago paper, every day...

Labor unions at the CTA lost a challenge to the transit agency's plans to lay off more than 1,100 employees starting Sunday as part of major service cuts to reduce a budget deficit.

An arbitrator's ruling today against the unions means that the cuts -- an 18 percent reduction in bus service and 9 percent for trains -- will be implemented, barring any developments to erase a $95.6 million deficit that remains for 2010, transit officials said.

CTA management has introduced more than $200 million in internal cuts and other cost savings, and it said the unions must agree to salary and other concessions to help erase the rest of the deficit and stave off the service cuts. The unions representing CTA bus and rail workers have so far refused, saying they made concessions in the past.

Posted by Greg H. at 10/28/2010 3:48 PM CDT on Chicago Business
Chicago's bond rating has suffered another hit, this one from Fitch Ratings.

The New York-based firm on Thursday lowered its rating on $7 billion in outstanding general-obligation city debt to AA- from AA, particularly citing the city's increasing reliance on one-time revenues to fix its budget.

"While the economy remains broad and diverse, the city's financial position has weakened," Fitch wrote. Revenues have been hurt by high unemployment and above-average home foreclosures, while the city has reduced reserves from around $2 billion a couple of years ago to a projected $790 million by December.

Fitch applauded layoffs and other payroll trims implemented by outgoing Mayor Richard M. Daley, but added, "The ability to make further expenditure cuts to personnel is extremely limited" due to union contracts.

Hundreds of non-teaching staff members could be laid off under the new budget proposal for Chicago's community college system.

Next year's budget for City Colleges of Chicago could fund 311 fewer positions, some through attrition.

But that could include 225 non-teacher layoffs.

Chancellor Cheryl Hyman they would affect administrators, as the district tries to consolidate some workers from its seven colleges.

S&P said in its report that the new rating "reflects our view of the city's ongoing structural imbalance and heavy reliance on non-recurring revenues to bridge its 2011 budget gap, including the use of most of its remaining reserves from the sale of its parking meters."

Daley To Union: 1,600 City Lay Offs Unless Concessions Made

Mayor Daley will be forced to lay off up to 1,600 city employees -- none sworn police officers or firefighters -- unless organized labor agrees to another round of givebacks to wipe out a potential $300 million shortfall, union leaders were told this week.

But with all the grim news raining down in from every direction, what transforms the situation from merely Very Bad into Utterly Toxic is when city workers look around them and see that, even as the City cries poormouth and demands ever more work for ever less pay -- hard work, long hours, creativity and competence still have nothing whatsoever to do with who gets the axe and who does not.

That no matter what City Hall public information machine says about drowning in red ink and the desperate need for everyone to pull together for the common good, there is still a fucking club,

and they sure as Hell still ain't in it.

Clout apparently still counts in City Hall jobs -- despite Mayor Daley's promise to implement a personnel system free of politics in the wake of a hiring scandal that cost taxpayers $12 million to compensate victims of the city's rigged hiring system.

The wife of a former Democratic ward boss -- who also happens to be the daughter-in-law of a former alderman -- has survived a departmental merger that will eliminate 13 jobs and force nine layoffs.

Maureen Volini was a $73,752 administrative services officer for the Mayor's Office of Special Events.

Raygun and Bush I led the way on this new governance model.

Our boys Willie and Obie are just following along obeying orders (or else!).

This round of debts will be paid off in time for the Bush grandchildren to run them back up again, I'm guessing.

(Watch out, folks, for any new Greenspan Commissions that will need to raise your FICA contributions again in order to meet all the new and unexpected demands on your tax dollars.)