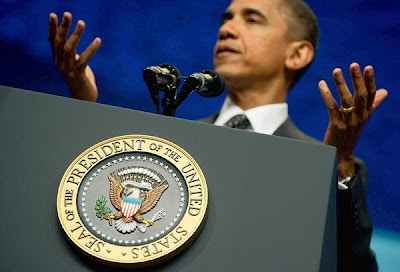 through my handy Universal Teabagger Translator.

Here are snips from the original (from The Hill:)

...
It [education] may be the economic issue of our time," he said. "It's an economic issue when the unemployment rate for folks who've never gone to college is almost double what it is for those who have … when nearly eight in ten new jobs will require workforce training or a higher education [degree] by the end of this decade."

Obama noted his administration's overhaul of the federal student loan program in March.

The reform package expanded the Pell grants and allocated $2 billion to community colleges to create career-adjustment programs for displaced workers.

Urging his audience to embrace the "promise … at the heart of our colleges and universities," Obama called the value of education an "essential truth" of the American experience.

"It’s what led our parents and grandparents to put a generation of returning GIs through college, and open the doors of our schools and universities to people of all races, broadening opportunity, growing our middle class, and producing a half century of prosperity," he said.
...

And here's what came out of the backside of my Wingnut Babelfish:

"I'm gonna take money away from the hard-working heroes of capitalism and give it to undeserving brown people and lazy, collectivist losers.

Which is weird, because for the last 18 months it seems that no matter what Obama speech or policy or legislative accomplishment I feed into the translator, my Wingnut Babelfish always poops out exactly the same results.

Funny, TPM just carried an article about Conservapedia'a Andy Schafley (yea, Phyllis' kid) ranting about how the Theory of Relativity is a liberal plot, yada, yada.
The anti-education zombies are on a tear. If history is any judge, the undead will be burning books by November.
Like the bumper sticker says,
"If you can read this, you're an elitist."

DG, you are killin me on the tweeter today with the Aqua Buddha stuff. Killin me I say.