Through An Ass Darkly 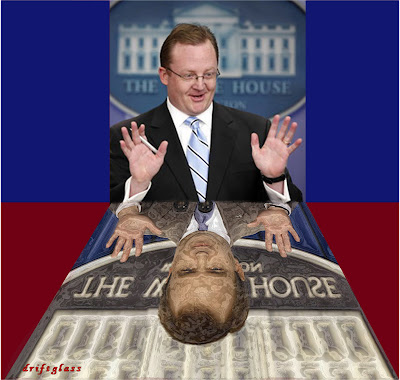 I managed to choke down about 20 minutes of Robert Gibbs' letter-perfect impersonation of Scotty Dog McClellan at his tap-dancingest today: after watching him bibble on about "teachable moments" and "mistakes were made" and the "media environment" without coming within a million miles of either the primary problem (Conservative media now completely runs the GOP and is wholly owned and operated by lying partisan shitbags and every single person in the press room fucking well knows it) or the secondary problem (The Obama Administration has now been exposed as absolute cringing pussies when it comes to taking on the Stormfront Right) I had to shut it off and haul out the puke bucket.

Gibbs never managed to utter the words "Fox" or "Brietbart" one, or even brush up against the Multibillion Full-Immersive Shoutycracker Media Machine until he was directly and repeatedly questioned about it; instead, Gibbs couched it all as some gauzy, metaphysical issue having to do with "urgency" and our modern news cycle and Teh Internets.

Of course, this of all started from before Day One: back when, if you wanted to work for the new Administration you basically had to confess in writing to every email and web site comment you ever made that might in some way be taken by someone somewhere as embarrassing to the White House. (Personal FYI: even though I would be considered very well qualified to work in at least two of the Obama White House's cabinet departments, this sort of thing is exactly why I never bothered to apply.)

The Bush Administration showed that even in cases where high ranking members Administration were caught dead-to-rights committing fatally flagrant acts of incompetence, high crimes or actual treason -- even where the Administration had made public promises to get rid of just such people if it turned out they were in any way in involved in such activities -- time after time the Bush White House would circle the wagons, protect their own, dig in their heels and just fucking lie about it.

And get away with it.

And when the smoke cleared, most of the perpetrators had gone on to prosperous careers as Fox News kapos.

But the Obama Administration?

Based on their record to-date, if the critique comes from the Right, apparently all it takes is one wet fart in their general direction from a con man like Breitbart or a sociopath like Beck and the White House will fall all over itself to kiss your wingnut boo-boo and make it all better, and under the fucking bus the allegedly offending staffer or organization must go, go, go!

If the critique comes from the Left -- no matter how loud, or righteous, of fact-based, or reasonable -- you are simply ignored.
at July 21, 2010

The sheer moral cowardice of this administration is breathtaking in its breadth and in the speed in which it reacts. The Democrats have truly internalized the message from the Reich-wing.

Kabuki theatre for the masses.
No cover charge; check your brains at the door.