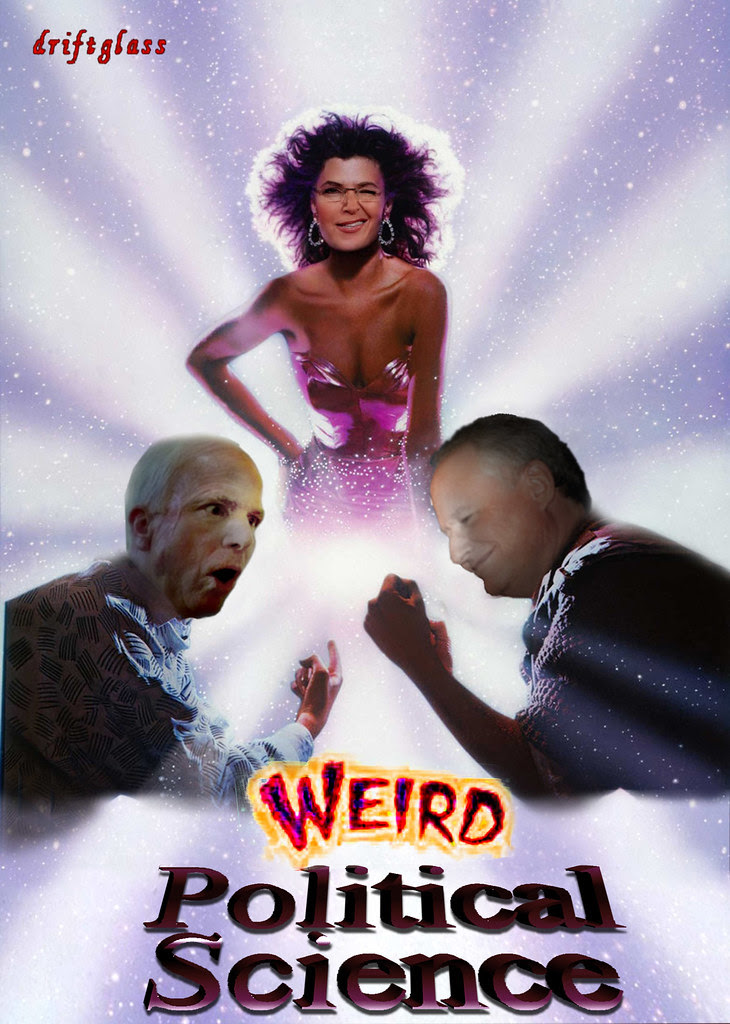 If David Fucking Brooks had One Big Wish, it would be that those infernal, omnipotent Liberals would quit conjuring an imaginary sylph name "Sarah Palin" out of thin air like "Candyman", demanding that she headline at important national conferences with words like "Conservative" and "Leadership" and "Republican" in their names, and tricking the media into pointing their cameras at her.

Or something (Bobo from the NYT):

"...This is a subject on which I have pent up opinions, so it’s a pleasure to lift my head up from early childhood attachment patterns (the part of my book I’m working on today) to blow off a little steam. First, let’s all stop paying attention to Sarah Palin for a little while. I understand why liberals want to talk about her. She allows them to feel intellectually superior to their opponents. And members of the conservative counterculture want to talk about her simply because she drives liberals insane..."

To understand the astonishing level of denial going on in this column, one must must first understand that David Fucking Brooks is essentially a political exile; one who has, for reasons that passeth all understanding, been granted lavish asylum in a well-appointed penthouse at the New York Times. He has neither Country nor Movement nor Party any longer and so, like the bitter ex-royal he is, Bobo is reduced to strutting back and forth on the New York Times' parapets all day long in moth-eaten Bill Buckley-era regalia, barking commands down at people who barely even realize he exists any more.

(After dark, while getting potted on gallons of port, it is rumored that he orders the houseboy and gardener to re-enact old episodes of “Firing Line”.)

"The Sarah Palin phenomenon is a media psychodrama and nothing more. It gives people on each side an excuse to vent about personality traits they despise, but it has nothing to do with government."

I gotta say, I find it particularly hilarious hearing Palin dismissed as an inconsequential media creation by a man who makes his entire living running from one talking head show to another and pounding out 800-words of taupe drivel for the NYT twice a week.

"She is in 2010 what Jerry Falwell was from the mid-1990s until his death — a conservative cartoon inflated by media. Evangelicals used to say that Falwell had three main constituency groups — ABC, CBS and NBC."

What “evangelicals” David? Name them. Name one. 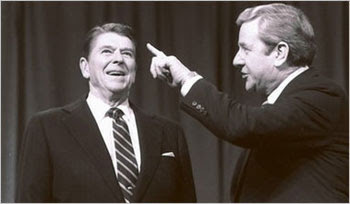 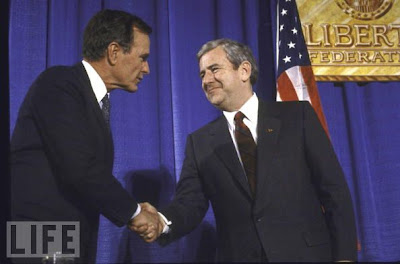 What I remember of Jerry Falwell was that, back when John McSame was all Mavericky 'n shit, he actually took on Jerry Falwell...

..and then ate his words eight years later 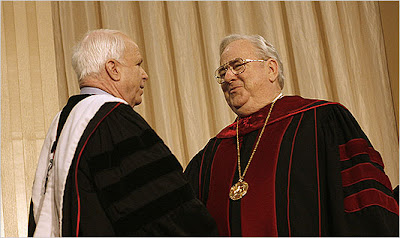 after it had been made Absolutely Clear to him that, without the blessing of the Christopath Right, nobody gets out of the Party of God's primaries alive.

And what David Brooks and I both know for damn sure is that “Jerry Falwell” was often used as shorthand for the hundreds of hard right-wing theocratic evangelical groups and leaders who positively infest the GOP from crotch to crown. Which ironically is what makes Bobo and Palin deeply kindred creatures; they are, in the end, both Conservative whose livelihoods and identities depend entirely on completely fictional alternate histories of their own Movement in which they recast themselves as heroic sages or warrior prophets, instead of skeevy co-conspirators.

What none of the Exiles on Reagan Street can bring themselves to acknowledge is that Palin isn’t one of the causes of the collapse of Conservatism; she is the Effect. She, like Dubya, is an inevitable emergent property of Conservatism. The end-product of a generations of the Right relentlessly inbreeding Rage, Entitlement, Fear and Ignorance, willed into existence not by mere media conjuration like some zombie Maybelline Ad come to life and running wild in the streets, but by senior members of the Conservative leadership caste, as well as the Republican Party's 2008 candidate for

President of the United States

Reagan, with his mantra of "Government Is The Problem"

was the mountain blowing its top.

Palin and her horde is the pyroclastic flow from that mountain

obliterating everything in its path.


Finally, I have to smile at the fact that one of the only people willing the yank Bobo’s covers off was Andrew Sullivan. Well, half-off; Sullivan eschewed referring to Bobo by the correct word – liar – instead choosing to pull the punches he was aiming at his Brother in Conservative Revisionist Arms 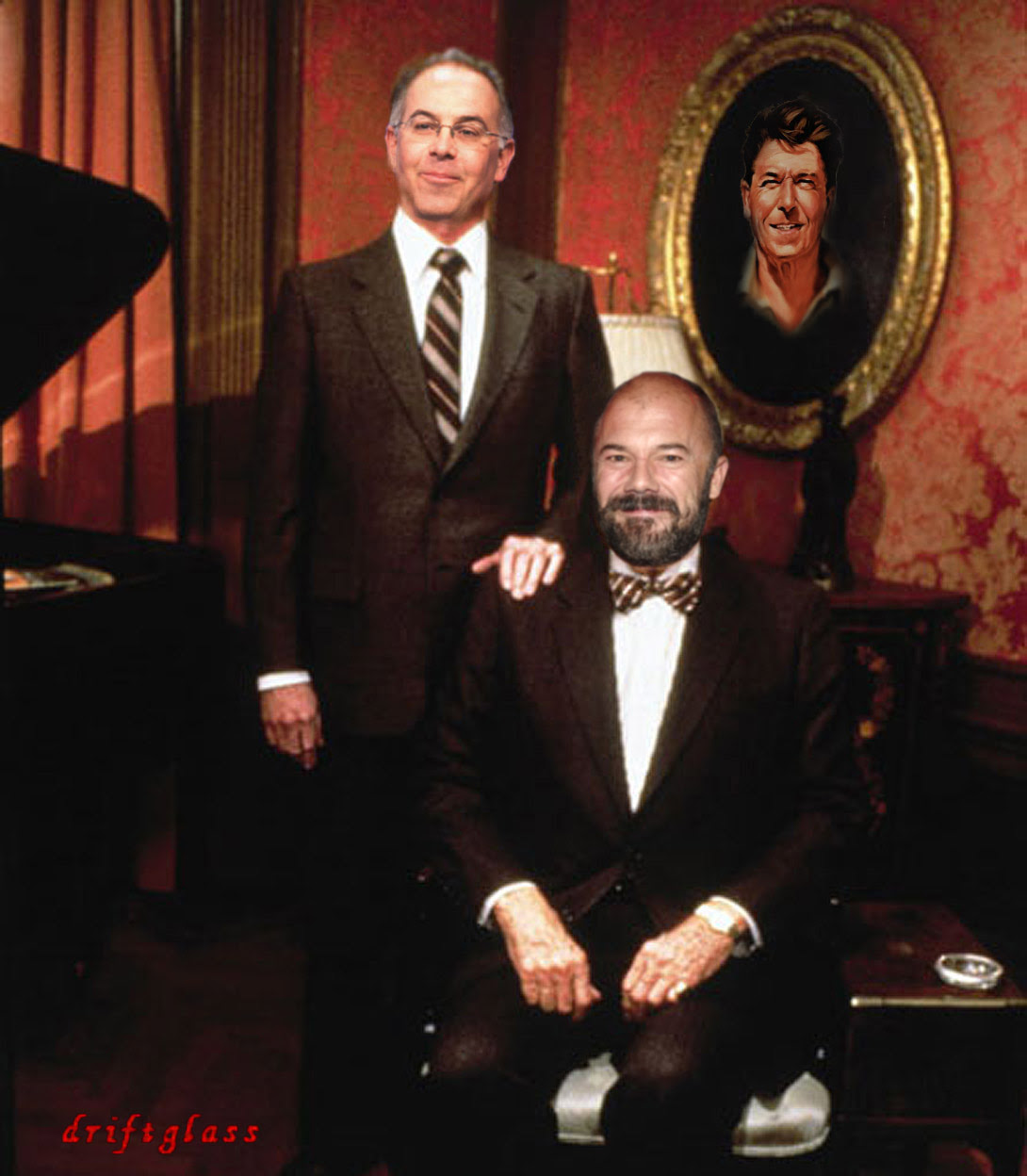 "...if modern post-Nixon Republicanism has always had a thread of class resentment sustaining it, Palin concentrates it into a heady brew. If Nixon was cocaine for the resentful psyche, Palin is meth.

Secondly, she fuses both Tea-Party anti-government sentiment with neocon conviction about the necessity for American empire. Of course, none of this makes any sense, but Palin, unlike some of her rivals who feel some kind of lingering need to relate their policies to fiscal and global reality, is a thoroughly post-modern creature. She creates her own reality, and that is an incredibly important talent for a party base that desperately wants to live in another reality (a kind of souped-up version of 1950s culture and late nineteenth century economy). Her book - a fictional account of an imagined life - sold well with the GOP base because they too want a fictional account of America's current standing in the world and an imagined set of viable policy positions.
...

Yes, many tea-partiers do not think Palin is "qualified" to be president. But primaries are won by enthusiasm and star power. Palin has both. And she has money. And, most important, she has a media machine dedicated to promoting her outside of any real scrutiny or questions. She has never faced a real press conference and speaks to "pre-screened" questioners at debates and speeches. She is a test-case of how willfully divorced from reality a segment of America can remain, and how irrelevant reality is for today's niche-targeted media. All of this makes Palin the most potent force in American politics since Obama.
..."

-- it is a pretty accurate critique.

Although more than passing strange coming from a guy whose own ideological tree fort is decorated entirely in floor-to-ceiling black velvet semi-nude painting of Ronald Reagan.

"What none of the Exiles on Reagan Street can bring themselves to acknowledge is that Palin isn’t one of the causes of the collapse of Conservatism; she is the Effect. She, like Dubya, is an inevitable emergent property of Conservatism. The end-product of a generations of the Right relentlessly inbreeding Rage, Entitlement, Fear and Ignorance, willed into existence not by mere media conjuration like some zombie Maybelline Ad come to life and running wild in the streets, but by senior members of the Conservative leadership caste..."

A bullseye accurate appraisal cross-pollinated with scintillating prose- all in one tight paragraph. Damn.

Sully, every once in awhile, has an insight that rings that little bell in your mind: she is the representation of a new reality, a fiction that people who like her need to erase the past 10, 20, 30 years from their consciences.

She is a sort of veneer over the ugly, cheap formica of their voting history and acceptance of all that was ugly and evil about Republicans.

I sometimes wish Progressives could tap into that spite and use it for their own advancement.

The weird thing about weird science is that both words violate the i before e except after c rule....

Nicholas Cage said it best in 'Wild at Heart': "This is a snakeskin jacket! And for me it's a symbol of my individuality, and my belief... in personal freedom."