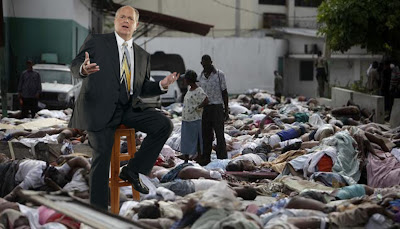 Why is anyone, anywhere even pretending to feign --

– Joe Scarborough: “The insensitivity is stunning, the words are deplorable. … [It's] indefensible.”

– Pat Buchanan: “They’re deeply insensitive, no doubt about it. I think the President of the U.S. speaks for the country when he stands up there. … I think Rush’s comments were cynical.”

...
The man who race-baits on a regular basis responds to a woman caller by telling her she has tampons in her ears. Now remember that Limbaugh is one of the de facto leaders of Roger Ailes' Republican party. An enthusiastic supporter of torture and of the abuse and murder of innocent prisoners at Abu Ghraib, he is nonetheless worshiped by a theocon like Kathryn Jean Lopez.
...

-- when a long-time Conservative stalwart like Rush Limbaugh sets up a shop in the middle of a global tragedy to picnic on the misery and horror of the dead, the dying, the maimed and the dispossessed?

Long ago Conservatism dropped even the most vestigial pretext of being anything other than a race to the bottom of a sewer that has has no bottom, and for over 20 years Rush Limbaugh has been the pace car in that race. He has never been anything other than a perfectly constant bigot, a reliable liar, a relentless fear-monger and generally a giant, moral dumpster fire that has been the illuminating beacon of the entire Conservative movement.

Rush's vision of Heaven is heaps of suffering and dying brown people stretching off in every direction as far as the eye can see.

Rush's vision of his place in that Heaven is sitting on top of a mountain of gold, smirking, as Republican politicians lick his ass and 30 million Pig People applaud his every utterance.

Rush lives every day in that Heaven, which is why his vision of Hell is someone, somewhere daring to lift a compassionate finger to stop it.

Conservatism is a disease that comes in only four, mix-and-match flavors: moral cowardice, outright depravity, self-righteous ignorance, and opportunistic parasitism.

America is a land where Conservatives like Limbaugh get rich selling hate to imbeciles, and where teevee clowns renew their Serious Media credentials by feigning shock over it once a year.

And as long as this remains the American status quo, we're screwed.
at January 15, 2010

Also? Pat Buchanan calling someone of his own camp insensitive? No amount of pinching will bring back feeling, toots.

(Not that Mr. Limbaugh's utter lack of empathy/sympathy hasn't been known for the last 20 years. It's that even his fellow sociopath has noticed.)

I love it when you talk dirty, Dg.

Don't let them by with anything.

How dare anyone pretend that any of this is new.

How fucking dare anyone pretend that any of this is surprising.
__________

It isn't a surprise, but the fact that not a single Republican leader can come out and condemn the guy for this? That is still not a surprise.

Sidenote: I actually was working on a Pat Robertson and Limbaugh devil photoshop idea, this is much better! Damn you Drifty!

Dude, that was awesome! Keep up the great work.

you, as is your wont, always nail it. your creativity and way with words, is what inspires me to continue to take massive action to make a difference.

Outstanding. I'll make sure I let every conservative know this. If they want to argue it, good luck to 'em.

Conservatism is a foul plague ridden beast determined to destroy as much as possible before it succumbs.

You succinctly define conservatism better than I did with my The Milk of Republican Kindness
post.

The nutter pundits feign outrage but down deep they agree like all the rest of the pig boy lovers.

"Moral dumpster fire that has been the illuminating beacon of the conservative movement." I have been accused of having the gift of verbal joust and parry, but I would give my right nut and half of my left to have thought of that one. You inspire more than you know. Fuck Rushie, Fuck Patty, Fuck 'em all. May they one day suffer what the Haitians have.

Actually, I kind of dig this whole thing. Understand; I begrudge no one their outrage, and join them in it. But after we cool down, let us reason together. :o)

I mean, we have the de facto head of the republican party reminding everyone (again, in case anyone missed it the first 32 times...) that he is a grotesque parody of a human being. AND! That a large chunk of the GOP think that it's waycool that he is just that. :o)

We should, as the saying goes, give him a lick-and-a-promise, kind of en passant, but I don't want to run him back into the closet until we can use him to scare the living shit out of enough independents and "centrist" democrats to juuust maybe keep a vestigial dem majority in both houses. (not that it looks like that will help much...)

It's why I don't fear Palin, or Beck, or really, any of the wingnuts. Let them gibber.

The republican party has NO room to move to the right. If it does that, the Wall St. half of this unholy equation will have a tough choice to make. They will either have to sever the joined-at-the-asshole relationship, thereby losing lots of bible-zombies, or they can move with them, and lose so many sane-person votes that they will become "rump" in all senses of the word. :o)

That's why I don't want Limbaugh and his ilk to cease their hateful, mindless, spouting...at least, not until the next election.

These people are literally worth millions of votes to us. Now if only we can translate that into electing a president and a congress that aren't afraid of them.

And yeah, this is not news.

And yeah, this is not news.

The oxy-moron and god's little malignant dwarf have become such parody...that parody just doesn't suffice anymore. The leadership of the party has been boiled down to a perfect rieux. Half our country happily and proudly follows an immoral band of bad comic book villains. As you have pointed out more than once recently: We are truly screwed.

Hope you didn't mind my using your lead picture as my lead picture for my new Assclowns of the Week #81: Hatin' on Haiti edition. I didn't see your signature on it so I fogured it was fair game.

You have put into words what I've been putting into words for years, fat boy has set the tone of the republican'ts for years now, since 92 at least. He is a liar who deals exclusively in lies, half-truthes and inuendo, he has perfected te conservative art of projection and has spawned numerous clones. The Republicans are the wat they are today because of him, the only thing you need to know about fat boy can be summed up in the following, spoken by fat boy himself;
http://www.youtube.com/watch?v=-Etf8R-MSaE