Talk To The Hand 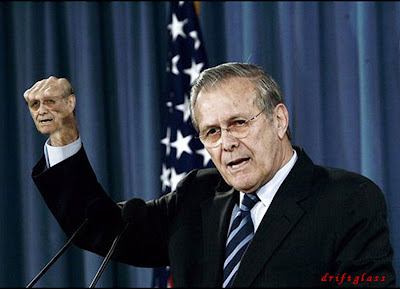 Because Dick Cheney's "finest Secretary of Defense this nation has ever had" don't listen.


So in addition to being the petulant, foot-dragging martinet who “impaired administration performance on a host of matters extending well beyond Iraq” from blocking time-critical assistance from being sent into the Katrina disaster zone to refusing to play nice with our allies...one of Rummy’s other enduring legacies was tarting up Dubya’s daily briefings on our ongoing and decisive victory over Eurasia in Iraq with festive Bible-verse cover pages. 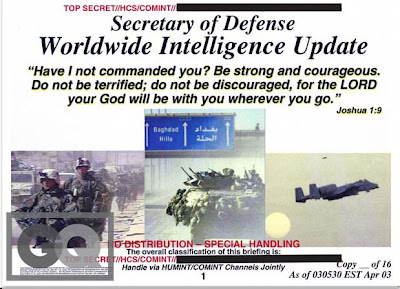 The effective of which is reporting in this very troubling article from GQ Magazine (Here's how the pros do it, Modo):

...
At least one Muslim analyst in the building had been greatly offended; others privately worried that if these covers were leaked during a war conducted in an Islamic nation, the fallout—as one Pentagon staffer would later say—“would be as bad as Abu Ghraib.”

But the Pentagon’s top officials were apparently unconcerned about the effect such a disclosure might have on the conduct of the war or on Bush’s public standing. When colleagues complained to Shaffer that including a religious message with an intelligence briefing seemed inappropriate, Shaffer politely informed them that the practice would continue, because “my seniors”—JCS chairman Richard Myers, Rumsfeld, and the commander in chief himself—appreciated the cover pages.
...

And so, in the interest of explaining to the Decider in language he can understand why he and the rest of the Cheney Torture Administrations will go down in history as the worst Presidency ever: 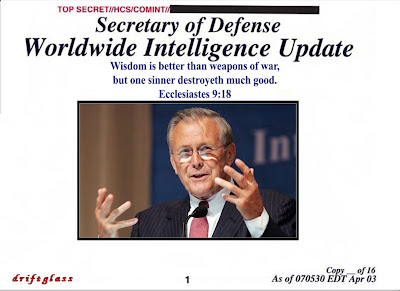 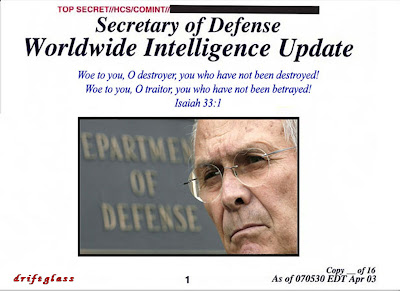 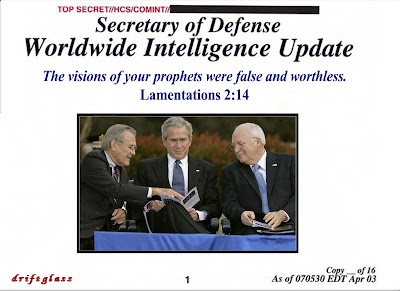 Because apparently the only two things capable of crossing the Decider’s blood/brain barrier are Jack Daniels and the Book of Revelations.
at May 18, 2009

Actually those are all Old Testament quotes. Funny how supposed Christians never seem to quote, say, Jesus. Sermon on the Mount? What's that?

Mahakal,
That's the one where Jesus talks about credit default swaps and "Blessed are the hedge fund managers", right?

The really appalling part of this is quoting the Book of Joshua. If you read it all the way through, it's a how-to manual for genocide and ethnic cleansing against little brown people in the Middle East. Wait until the Muslims read up on that.

Ah, drifty me lad, you read my mind - I was looking for some pithy quotes as responses, and naturally you have gone ahead and did far better.

“…but one _bungler_ destroys much good.”

They should have stuck with "Thou shalt not kill"..... jes sayin'.

This is truly frightening. Scary scary people, I knew that, but this...... :-O

Drifty,
I think it's blessed are the cheesemakers. :)

They really are anti-Christ.

Not the cheesemakers, I mean. Cheese is good. If it's cheese, and not pasteurized cheese food product.

What strikes me about this is that Rummy seems to have felt that he needed to put shiny stuff like Bible quotes and neat-o war pictures on his briefs to get the President to actually look at them. One has to wonder if he considered the graphic novel format.

And did you notice that the graphics coincide with the biblical passage? This took a little bit of work, you gotta hand it to Rummy's staff.

What is so disturbing that has not been expressed directly is the fact that Rummy, Cheney, Wolfie et al couldn't have cared less about religion or Dubya's silly evangelistic notions. Dubya was never part of their HeManNeoCon club and they were the ones that had to convince him his mission was directed by God while all the time knowing it was directed by the Holy Church of Oil.

Incidentally, Driftglass, your blog is inspired. I have spent several hours reading it after following a link here from another blog. (Yes, Virginia, there is intelligent life in the blogosphere.)

Okay, that is one of the creepiest photoshops I have ever seen.

brilliant.
your images are often funny and sometimes outrageous into the bargain.
this one is a masterpiece.

Now that little dickey has so prolifically poked his head out on to the stage to warn us of impending doom, I wonder if Rummy will emerge from whatever vipers nest he has crawled into to reinforce the message of his masters? God knows he sure used to love the sound of his own voice back in the day. Maybe that was because he thought his voice was gods voice. Why else would he use quotations from a bunch of bronze age goat herders for briefing's covers? Yea and verily, so sayeth the Rumster. So let it be written, so let it be done.

It is easier for a camel to go through the eye of a needle, than for a rich oil oligarch and his buddies to enter into the kingdom of God”

I just want them to enter the kingdom of The Hauge.

When I was watchin' CNN's footage of the crossing of the drybed Rubicon (The one that flows between Kuwait and Iraq...which is one HELL of a hard crossing, as we have been discovering for the past few years, especially the second time around...) I seen the ray of Jesus's never-ending grace and love falling on each and ever' one o' them M1A1 Abrams. It was like a gigantic carbon-steel-hardened halo that would have given Erwin Rommel a hard-on that a cat couldn't scratch.

So. You needs to be careful while dissing Rummy for quoting the scriptures as the mission was so unspinnably being accomplished. He may know something that we don't. Or, at least, he was war-literate enough to have read Napoleon, when he said:

"God is usually on the side of the big battalions..."

Okay; he should have added:

"This only applies in the short-term. If you're trying to convert an Islamic nation ridden with factionalism leavened by the third-largest oil reserves on the face of the planet, into your 51st state, your mileage may vary."

i bet donny talks to his hand every night -- right before he puts on a torture/war video and .....