This 50-Foot-Tall Ape is not Iraq 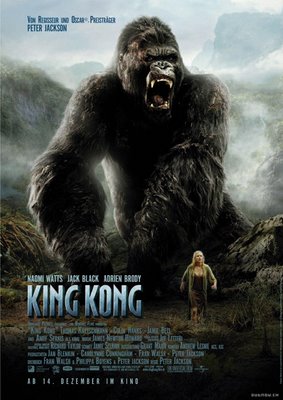 Therefore there is no 50-Foot-Tall Ape.

JIDDA, Saudi Arabia, Oct. 2 — A review of White House records has determined that George J. Tenet, then the director of central intelligence, did brief Condoleezza Rice and other top officials on July 10, 2001, about the looming threat from Al Qaeda, a State Department spokesman said Monday.

The account by the spokesman, Sean McCormack, came hours after Ms. Rice, the secretary of state, told reporters aboard her airplane that she did not recall the specific meeting on July 10, noting that she had met repeatedly with Mr. Tenet that summer about terrorist threats. Ms. Rice, the national security adviser at the time, said it was “incomprehensible” to suggest she had ignored dire terrorist threats two months before the Sept. 11 attacks.

Mr. McCormack also said records showed that the Sept. 11 commission had been informed about the meeting, a fact that former intelligence officials and members of the commission confirmed on Monday.

When details of the meeting emerged last week in a new book by Bob Woodward of The Washington Post, Bush administration officials questioned Mr. Woodward’s reporting.

Officials now agree that on July 10, 2001, Mr. Tenet and his counterterrorism deputy, J. Cofer Black, were so alarmed about intelligence pointing to an impending attack by Al Qaeda that they demanded an emergency meeting at the White House with Ms. Rice and her National Security Council staff.

According to two former intelligence officials, Mr. Tenet told those assembled at the White House about the growing body of intelligence the C.I.A. had collected suggesting an attack was in the works. But both current and former officials, including allies of Mr. Tenet, took issue with Mr. Woodward’s account that he and his aides had left the meeting feeling that Ms. Rice had ignored them.

…
In his own book, Mr. Woodward wrote that over time Mr. Tenet developed a particular dislike for Ms. Rice, and that the former C.I.A. director was furious when she publicly blamed the agency for allowing President Bush to make the false claim in the 2003 State of the Union address that Mr. Hussein was pursuing nuclear materials in Niger.

“If the C.I.A., the director of central intelligence, had said, ‘Take this out of the speech,’ it would have been gone, without question,” Ms. Rice told reporters in July 2003.

In fact, the C.I.A. had told the White House months before that the intelligence about Niger was dubious, and had managed to keep the claim out of an October 2002 speech that Mr. Bush gave in Cincinnati.
…

The Dubya Debacle is the confluence of so many, many horrifying plot lines that it's easy to get lost in the veritable forest of Bush Administration scandals and failures, but this particular part is not a long story.

This is, in fact, a very short story.

The head of America’s premier intelligence agency came to the President’s closest advisor -- his National Security Advisor -- and warned her that the United States was about to be attacked by a known enemy of the United States.

An enemy that had attacked and killed Americans before.

But he wasn’t talking about Iraq, which was the ONLY subject this Administration wanted to discuss, so she told him to fuck off.

And that is the end of story, except for this: if you still stand behind these thieves and liars and cowards and miscreants, how can you live with yourself?
at October 02, 2006

And now for my Bushtard WATB impression:

Sweet Jeebus. Hands down and going away, the Worst. President. Evah. If we get one worse than this one, it'll be time for the Black Capsule.

Everyone is looking to pass the buck and remain unaccountable. With all the intelligence pointing to an impending attack by Al Qaeda but that was not taken seriously. This pretty much sums the whole thing up. if you still stand behind these thieves and liars and cowards and miscreants, how can you live with yourself.

This pretty much explains why everyone was on the TEEvee the last couple weeks spreading the meme that Clinton failed to catch OBL. They knew this was coming, and they needed to inoculate their idiot base.

Now, to them, this is a "so what", since everyone knows that Clinton could have killed OBL if the actor playing Sandy Berger hadn't slammed down that phone!!

knaverupe,
Yup. Rove better have one raging Oktober Surprise to get them out from under this.


Ok, this salt's not gonna mine itself

Can someone explain to me why this didn't come out in the 9/11 hearings? I'm confused (as usual). Oh I forgot we can't blame anyone unless it's Clinton. Silly me.

These people are stupid on a cosmic level. I'll guarantee you that Condi was fucking about just as much as Bush was, those first 8 months - probably IMing her girlfriends, working on her memoir and looking up vacation homes on the internets, then walking around really quickly with a clipboard to look busy once in a while.

"No one could have anticipated!!"

Condi should have been fired on 9/12/01, no questions asked.

Despite his recent relegation to the status of minor planet, Pluto, Lord of the Underworld, continues to reveal the deepest and darkest secrets of life on Earth. Especially since his directional shift back on 9.4.06. Check the headlines if you still don't believe in the symbolic efficacy of astrology!

Remember all those veteran CIA people who got fired because they wouldn't toe the Elephascist/Bushevik/Republicultist line?

And maybe it's not the only one they're planning to roll out?

The boy king shoulda listened to Daddy when he said, "Son, you NEVER fuck with the intelligence agencies".

After a few plot twists, character assassinations and false endings, at least now we're finally getting to Act III.
We don't have to cover our eyes anymore during the scary bits, so it's time to end this horror movie - they should cue Karl's surprise and get it over with already.
We can take it.

It's late and time to get back home.

In the old days, when public officials had a sense of honor and shame, you could leave a pistol on their desk and they'd get the hint.

Red tape is only for Democrats, apparently.