The people who block Liberals for pointing out that the Left has been right about the Right for decades continues to beef about not being given credit for being right about Trump six years ago.

Wrote about it a couple of days ago, and they're still going on about it.

Our camera slowly pushed in on two recently-former Republican MSNBC employees on their other  media platform discussing how unfairly they are treated by arriveste Republicans who are only now willing to halfway criticize Donald Trump.

Tim Miller:  It's been a nice little run for those of us on the side of democracy.  It'd be nice to hear from just one person who was, like, "Y'know, you guys really had this right, it turns out."  It'd be nice for one person to say that, uh, because it is kinda true.  So we just can say it to each other, Charlie [Sykes].  Because I feel like we always knew we were right, but boy, the evidence just keeps piling up in our favor, doesn't it?

Sykes:  Well, and has for a long time now.

Miller: And a low level of rightness for a long time.

Sykes:  It... it does feel that, that moral vindication, however, is sort of like the equivalent of a participation trophy, right?  Okay, so, hey, here's your little, y'know, certificate of moral vindication, but let's move on to something else.

Miller: I like my certificate, so, okay, can we get a... can we frame one.  Can somebody send one to me.  I can frame it.  Put it up next to the pinto bean [poster].  I wouldn't mind that.  Like, it's something.

A real shame that for becoming alarmed that your Republican party was full of Republicans a couple of decades too late, all you got was a participation trophy.
Well, that and the financial backing to start your own media corporation.
And contributor contracts on MSNBC.
And various books deals, which are guaranteed a wide release and promotion across the entire mainstream media.
And paid speaking gigs.
And an open invitation to pen columns in major American newspapers and magazines pretty much whenever you feel like it.
But you did finally notice, so good on you.  And since you feel the need, here you go: 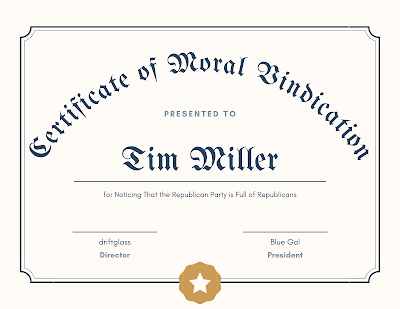 I like using the old Die Hard movie quote from old Bruce Willis..."Welcome to the party, pal! With just the right hint of sarcasm, and of course the dead bad guy body tossed from ten stories or so that crashes onto the car as the exclamation point.

Monday morning comin' down and on the way to work, oh yeah, that was back before I retired...Oh well. An 'Oh Well' like the old Peter Green "Fleetwood Mac" "Oh Well." To start the second day of a new week in Paradise.

Complementary pat on the head when awarding this certificate is contraindicated.

OK, off topic but Briana just had a brilliant idea: ChatDFB; a low rent AI program that answers every question posed to it with "Both sides do it!"