Rosencrantz and Guildenstern Are Never Trumpers 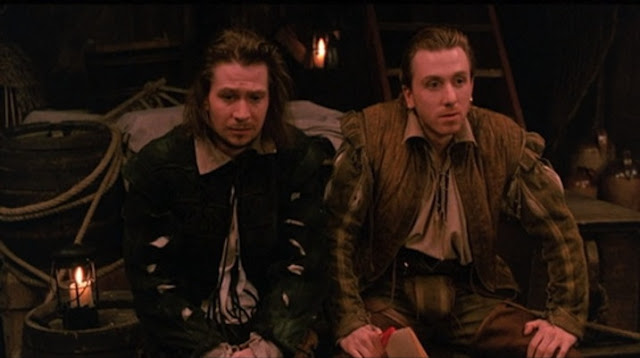 The most common feeling that comes over me when I sneak into the Never Trump compound just beyond the tree line to reconnoiter is a kind of ... political vertigo.

A certain dizziness of the soul that comes from the weirdness of hearing people who spent their entire adult lives shitting on Liberals...talking very much like Liberal bloggers circa 2005.  Except that much of their bitching and moaning about how absolutely right they were and how ain't it a shame that no one listened takes place on national teevee and in America's most prominent newspapers and magazines, instead of the media Coventry into which Liberal critics were permanently exiled by those same teevee networks and newspapers decades ago.

And to compound the weirdness, these goofs continue to pretend that the Left's critique of the Right -- which they are now in the business of aping, chapter and verse -- either never existed, or was and is silly, stupid and unserious.

What follows is not a transcript of the actual exchange between MSNBC contributor Tom Nichols and MSNBC contributor Charlie Sykes on Mr. Sykes' podcast, but  rather was written by me to give you a feeling for the spirit of the exchange:

Sykes:  We warned them didn't we Tom?

Nichols:  We sure did Charlie.  We  warned them and warned them.  But did they listen?

Sykes:  No they did not, Tom.  They very definitely did not.  Do you remember on that podcast I did all the way back in 2016 when I warned them?

Nichols:  I sure do!  That was a great podcast!  And do you remember that op-ed I wrote in 2017 when I warned them?

Sykes: I definitely do!  It was a great op-ed!  We  warned them and warned them.   And what did we get for our troubles?

Nichols: You mean besides books deals and cable teevee contracts and speaking gigs and op-ed space in major publications and millions of dollars in free publicity for our other projects?

Sykes: Yes.  Besides all that what did we get for our troubles?

Nichols: Nothing.  Not a goddamn thing.

Sykes: Did they even thank us for warning them?

Nichols: No they did not.  Not a word of gratitude for all the warnings we gave them.

Sykes: Nope.  Not a phone call or a little "Thank You" card or a gift basket or anything.

Rosencrantz:  In fact, all of our former Republican friends hate us now, don't they?

Rosencrantz:  They hate us for being so damn right.  That's why they hate us!

Rosencrantz:  We were right all along and they were wrong and they hate, hate, hate us for it.  Because they know there is no walking this back.  There's no coming down out of this tree they've climbed.

Guildenstern:  And do you know why they hate us even more that for being right?

Rosencrantz:  In fact I do, because I am dizzyingly smart.  They hate us even more for reminding them that we warned them.  In fact I wrote about that just last week.

Guildenstern: Yes you did.  And it was great, great stuff.  And I wrote about it in my Newsletter.

Rosencrantz:  In fact, I think it's fair to say that we've earned all those books deals and cable teevee contracts and speaking gigs and op-ed space in major publications and millions of dollars in free publicity for our other projects because no one has ever been more right about the GOP -- more prescient -- than we have been.

Rosencrantz:  An no one has ever tried harder to warn about the direction the Republican Party was headed that we have.

Guildenstern:    And we sure did warn them, didn't we?

Rosencrantz:  We sure did.  And now they hate us for it.  For being right and for reminding them of how right we were.

As I said, all that was my fanciful re-imagining of part an actual conversation, which I gradually filtered into the mouths of the two minor characters from Hamlet who were made into the befuddled stars of a play by Tom Stoppard.

But this next part is not fiction.  Except for my interjections, it's from the actual transcript.

Sykes: But it does feel like we just toggle between these two extremes, right?  It's either "Okay this is just too ridiculous I have to back off" versus "Hey, uh, guys there's a big fucking meteor headed right towards your head. Why are you not more upset?"

Nichols: And you're not going to solve it with a Meteor Meme.

Nichols: I think the thread that underlines that -- because I... I've had the same feeling you do Charlie -- I think you know this is, y'know, going to sound like another edition of Grumpy Old Men here on The Bulwark.

Nichols: But I think um the thread for me that underlines it is something I've written about before which is Seriousness.


driftglass:  And here we go.  Remember kids, the subtext of all the huffing and puffing these guys do on every platform they inhabit is always about controlling the narrative.  All about centering themselves exclusively as the Wise Men.  As the only ones serious enough to arbitrate who gets treated as an adult and who gets dismissed as silly, flighty children.

Nichols: You know it's... it's a... you should have your hair on fire about the decline and potential, y'know, overthrow of the Constitution of the United States.  That's a big goddamn deal. On the other hand...

Nichols: On the other hand...y'know, calling yourself The Resistance, y'know like you're all wearing Berets and skulking through the forests of France in 1944 is just silly.And so there's a... there's this kind of tacking back and forth between you know "LOL, Nothing Matters" and uh "Look at this funny meme I made with a dog" and you know people uh saying "Oh my God, y'know uh this is... everything is fascism and Nazis all the way down."

driftglass:  Actually, from top to bottom and side to side, the GOP has been ambling, then jogging, then racing, then rocketing towards full-on fascism for decades, but you were too busy snarking about Liberals to see it back when you might have been able to do something about it.  So, no, not the Nazis of 1944.  But the Nazi Party of 1930?  Hell yeah, and you'd have to be blind or a liar or a blind liar not to see it.

Nichols: There's no adult response to this...


Got it?  Nichols and Sykes and all these Very Serious Goofs who refused to see the rise of fascism in the GOP until it grabbed 'em by the throat and threw them out the front door...these  guys are the adults.

And you you'll never guess who the silly children are.

Nichols: I do think that that's the... that's the thread that underlines all this of saying look, there's a, y'know... these are adult reactions you need to have.  Which is to be concerned, to be resolute, to want to do something about it.  But, um, y'know, you're not solving it by wearing, y'know stickers that say, uh, y'know, "Vive la Résistance!" and "LOL, Nothing Matters".

Who are the silly children?

Take a look in the mirror kids.

Because this is how your "allies" see you and talk about you when they're not in front of the cameras at MSNBC.

"Nichols: There's no adult response to this..."

Sorry. Every time you drop a R&G reference, I flash on this scene.

There's nothing funny about the people who set the United States on fire complaining that the flames have reached their balcony.

Great piece DG - so fun to read when you dive into that ‘editorial journalist’ mode. You deserve a Chair somewhere over at least three of these guilty-eyed charlatans.

We need more brilliant liberal voices in penetrating media. I wish that shit wasn’t so hard.

Not sure if there are actual women they can hook up with but Peter can buy many red light district female sidewalk workers to shore his site up for those poor republicans that didn't get a damn thing out of rat F___ing America.

Those poor fellows having to live in republican victimhood.