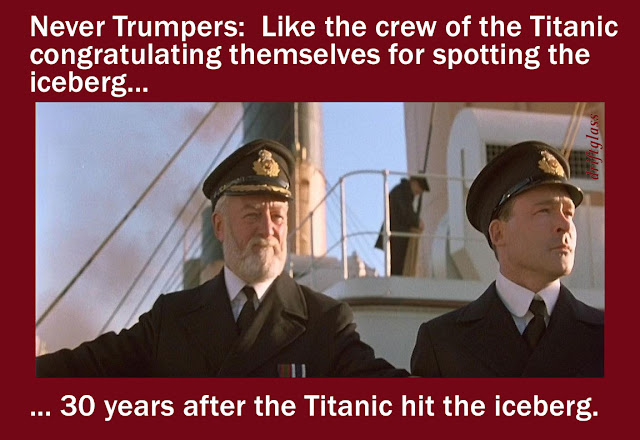 I do this less often than I used to, but every so often I still like to take a peek over the transom to see what our Never Trump betters are up to.  Those savvy life-long professional Republican political havers-of-opinions who, overnight, lost their entire party to a Day-Glo Orange racist con man, and have spent every day since sternly lecturing those of us who didn't lose our party to a Day-Glo Orange racist con man that we suck at politics and we should shut up and run our party to their specification.

Because they're on the teevee and you're not.

Today we take a quick look-see at a conversation between Mr. Peter Wehner (unreconstructed Iraq War pimp, contributing opinion writer for The New York Times and contributing editor at The Atlantic) and Mr. Charlie Sykes (a 30-year Conserative Radio veteran as the 'Rush Limbaugh of Wisconsin' and Republican insider who almost single-handedly destroyed Wisconsin's chance at getting high-speed rail, and was the political doula to just about every shitty Wisconsin elected official for the past 20 years: a list that includes but is not limited to Paul Ryan, Reince Priebus, Scott Walker and Ron Johnson.)

Let us join these two darlings of the mainstream media now and bask in the warm glow of their collective wisdom:

Wehner:  ...And yet [Trump] won [the GOP primary] and he won easily.  Pretty much going away.  The question is "why?"  Why...what did Trump have that overcame all of those other obstacles?  And I think the answer is, it was the style.  It was the cruelty.  It was crudity.  It was the aggression.  What people in the base to the Republican party saw in Donald Trump was someone who would bring a gun to a cultural knife fight.   And that is what they wanted.  So the more they heard him, the more they rallied around him.

driftglass:  Yes.  This is what Liberals have been writing about the GOP base for decades.

Wehner:  If you were following the Republican party...

driftglass:  Yes.  We were and have been writing about it for decades.

Wehner:  ...you knew that [Trump] had tapped into something that was existing.  That was pre-existing, if you will.

driftglass:  Written about it.  For decades.

Wehner:  What happened is that, once he became the nominee -- and especially once he became the president -- then it was essentially all bets are off.  And those pre-existing attitudes and sensibilities which were dangerous to begin with were multiplied and amplified to an unbelievable degree.

driftglass:  Nah.  You've already done that a million times.  So just for laughs, what about flash back to your 2014 selves.

Sykes:  Let's flash back to our 2015-2016 selves.  Because we were there, right?  We're old enough to remember that when he came down the Golden Escalator we wrote the pieces saying, "You folks cannot be serious. I mean you understand what he represents".  But you're right.  He tapped into something.

driftglass:  You know, it doesn't even have to be my blog.  It's just that I'm obviously most familiar with my own content.  Just go read what pretty much any Liberal was writing about the state GOP long before Trump showed up.

Sykes:  But [pause] did you know...have a sense...that the Republican base in 2015 and 2016 wanted crudity and cruelty?  Because I knew that there were some elements that did, but what I completely underestimated was how resonant that appeal [was].  And I think you're exactly right.  That he tapped into something that I will admit that I was in denial about.

driftglass: I appreciate Mr. Sykes finally, grudgingly getting around to admitting that he was in denial about the real state of his own party.  No kidding, I do,  But since his one job for the duration of his entire adult life has been acting as a savvy Republican political insider who knew what was really going on behind the scenes of the GOP...and since he completely blew that one job...I have to ask, why is he still in the political-opinion-having business?  Why is he being paid actual American dollars to lecture Democrats on how awfully we're mismanaging our party?  Or on what "independents" secretly really think?   This is a guy who swears he never really knew what the GOP base was really like or really wanted even as Conservative radio hosts just like him were vomiting the real state of the GOP base out of AM radio speakers from coast-to-coast for decades.

driftglass:  I know you made an entire industry out of slagging, mocking and dismissing the Liberals who tried to warn you that your party was racing down the road to fascism, but there were also books -- entire books -- being written about the subject by names I know you will recognize.  For example John Dean -- Watergate John Dean -- published "Conservatives without Conscience" in 2006 and "Broken Government: How Republican Rule Destroyed the Legislative, Executive, and Judicial Branches" in 2008. And Kevin Phillips -- one of the architects of the Nixon's infamous Southern Strategy -- published "American Theocracy: The Peril and Politics of Radical Religion, Oil, and Borrowed Money in the 21st Century" in 2007.

Wehner:  Yeah, I'm not sure that anybody saw it to the degree that it existed, because it was so deep and so wide.

And there I slept in the cool, dreamless darkness until the sound of my own laughter shook me awake.  The Bulwark podcast was still playing and on a subconscious level I must've picked up this from Peter Wehner talking about Republican voters:

Wehner:  And the answer is, no, they can't do it.  Because it's too much cognitive dissonance.  And because [Trump] has become their hero.  Their leader.  And to acknowledge their mistakes about him would do two things which I think is psychologically very, very hard.  First thing it would do would be them admitting they were wrong about Trump on some deep and fundamental level.  And the second thing -- and I think the even harder thing -- is that they would be acknowledging that the critics of Trump were right.  So the people they had been in this intense, hyper-intense political combat for the last...

I started laughing because I was remembering what happened when the Never Trumpers were run out of their party and showed up on our doorstep -- the doorstep of the people they had been in this intense, hyper-intense political combat for the last +30 years.

And all some of us wanted to from them in exchange for letting them crash on our sofa, eat our food, pilfer seats in the media that should have rightfully gone to Liberals and, in general, bitch endlessly about how Democrats suck and we're just goddamn lucky that they're allowing us to give them shelter...

...was some acknowledgment that the Left had actually been right about the Right all along.

But instead of that, we got rage, indignation, denial, deflection, outright lies and this: 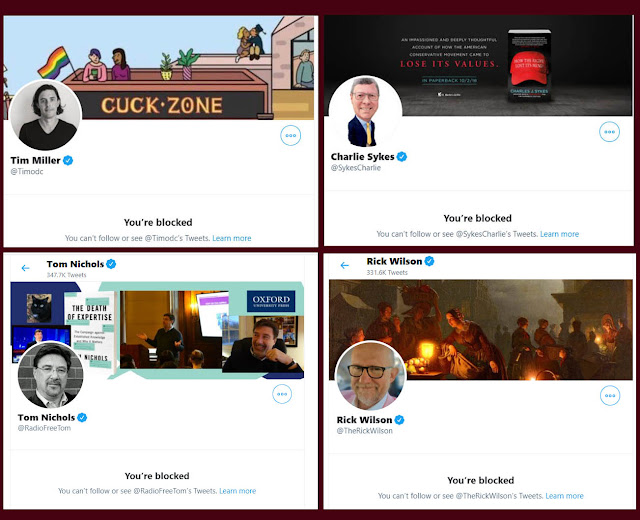 Because you can drag the man out of the GOP, but you can never drag the GOP out of the man.

And I am still laughing.

"...he began to laugh, I have been told, and his laughter grew and he would not stop, and it was not until after they jammed a needle in his arm, not until after that, until his consciousness slipped away from him, that his laughter subsided... stopped. And when he was recovered from his injuries enough so that he could be moved without damage should he struggle, he was put in an asylum. That was thirty years ago."