This Week In Liberals Made Me Do It: Charlie Sykes. Again. 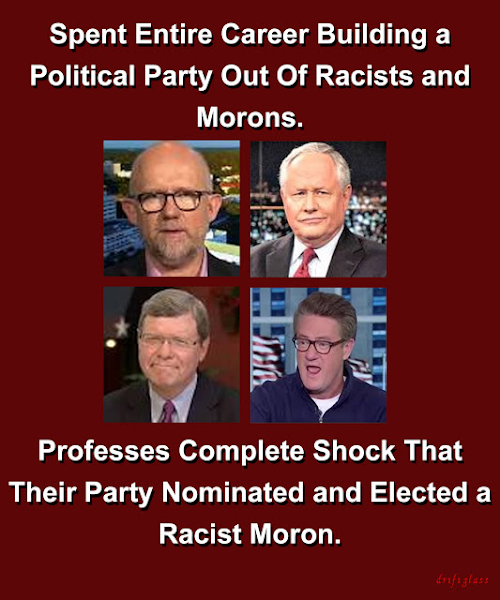 Like many other lumps of rock and gas spinning around our solar system,  Bulwark co-founder Charlie Sykes has a very predictable orbital period.

You see, once Mr. Sykes committed himself to the notion that, somehow, Barack Obama' Tan Suit Liberals were responsible for the sorry condition of his Republican party (while he -- a life-long member of the GOP and prominent Conservative influencer and radio personality for 30 years -- bears little or no responsibility for what his party has become) I guess he figured, well, what the fuck?  In for a penny, in for a pound.  Which is how Mr. Sykes and his guest, Fred Travalena Robert Tracinski egged each other into not only blaming Liberals like you and me for the election of Donald Trump, but also that we also somehow compelled the entire Republican Party to become racist.

Maybe you think I'm joking but I'm not.  In their long and desperate flight from taking any personal responsibility for the party they spent entire adult lives building, sooner or later Conservatives like Charlie Sykes always end up in the same place: hunkered down and snarling in the "Blame The Left" panic room...

-- where Sykes bathed his listeners in such wisdom as this --

Sykes: There's another, uglier part of that as well which is that if people are called "racist", y'know, for a variety of things, y'know, all... all the time, at a certain point not only [do] they become numb but they go, "Okay, y'know what, I don't care and maybe I should become a racist!" you know what I'm saying...

Because all you needed to do was wait almost exactly one year for Mr. Sykes to run the same idiotic, self-absolving fairy tale past yet another agreeable and compliant guest.

Sykes:  I know that some of our listeners are going to hate to hear this but and I wrote about this in my newsletter.  In some ways this is the consequence of decades of of crying wolf.  Saying that everyone is a racist.  So that when the real thing -- the real undiluted thing 00 comes along and you say, "Hey that guy's racist." you have a lot of people on the Right ... kind of like roll their eyes, shrug their shoulders and go, "This again?" because you've called everyone i've ever voted for a racist and now you don't have any vocabulary to describe this kind of thing.

(Truth be told, he rides this hobbyhorse a lot.)

This time the compliant guest is one of Mr. Sykes' new hires, Will Saletan, so of course there was zero pushback from the Bulwark's token "liberal".  Instead Saletan tried to very gently steer Sykes on to a different subject, very much like when Crazy Uncle Liberty has had a few belts at Thanksgiving and decides it's time to Tell The Young People The Truth About The Coloreds.  And rather that telling Crazy Uncle Liberty to shut the fuck up already, all the nice, timid people at the table instead try to deflect the  conversation onto the subject of football or the weather or, hey, how about dessert!

In his much longer rant in The Bulwark ("Tucker and the Dangers of Crying Wolf") Sykes beefs up his thesis that Liberals Forced Republicans To Be Racist by 1) citing Jonah Fucking Goldberg, 2) dredging up a comment that Michael Tomasky made about Mitt Romney in 2012, and 3) pulling a quote from The Federalist-adjacent RealClearPolitics, about which you can read more here:

A Popular Political Site Made a Sharp Right Turn. What Steered It?


Real Clear Politics has been catering to campaign obsessives since 2000. It pitches itself as a “trusted, go-to source” for unbiased polling. The Trump era changed its tone, and funding sources...

Clearly no expense was spared on exhaustive research to bulwak this bullshit.

But the erstwhile "Rush Limbaugh of Wisconsin" no longer has a political party, nor a sinecure on Hate Radio.  The tidal forces of history have forced him adapt to the folkways of the Both Siderist media ecosystem.  And the financial realities of running a media company that advertises itself as having "No partisan loyalties. No tribal prejudices." means he no longer has the flexibility to just lie about the Left all the time.  So, in defiance of every bit of muscle memory he has retained from his 30 years as the "Rush Limbaugh of Wisconsin" has to make nice-nice with at least some of us riffraff and acknowledge that the Right actually has problems of its own.

Which is why, 27 paragraphs and several embedded Tweets into his jeremiad about what a noxious asshole Tucker Carlson is and how Liberal are to blame for him being impervious to criticism, we finally get to this:

But this does not let conservatives off the hook.

There follows a grudging acknowledgement (you can practically hear Sykes grinding his molars to power) that, yeah, the GOP kinda had a problem with racism and conspiracy mongering nuts.  And that, yes, they've kinda had it for awhile.  And, yeah, all the Good Republicans like Charlie Sykes dealt with their presence by...ignoring it.  By wishing it away.  By telling themselves it was just a handful of fringe nutjobs.

And thus, by trying desperately to find a way to blame Both Sides for the Republican monster factory that he and men like him spent their lives building, does Sykes manage to completely negate his own thesis in his own words.

For years, we ignored the birthers, the racists, the truthers, and other conspiracy theorists who indulged fantasies of Obama’s secret Muslim plot to subvert Christendom, or who peddled tales of Hillary Clinton’s murder victims. We treated them like your obnoxious uncle at Thanksgiving. Rather than confront them, we changed the channel because, after all, they were our friends, whose quirks could be indulged or at least ignored. They could rant and pound the table, we thought, but they were merely postcards from the fringe, right? The hope was that the center would always hold, things would not fall apart, and principled conservatives would rise to the occasion. Except they didn’t.

And why did they ignore it?  Lie about it?  Savagely attack anying who spoke the truth about what was really going on inside the GOP.

To win elections.  Jebus, keep up.  Again from The Bulwark:

Blogger Ben Howe lamented all the signs we ignored, the times we looked away or simply rolled our eyes when one of our “allies” suggested that Obama was from Kenya or that liberals wanted to impose Sharia law on the country. “People would say outlandish things and I would find myself nodding my head and awkwardly walking away, not calling them out for their silliness,” Howe wrote, because there were more important issues at stake. So, he said, he lied to himself about who they were.

"I chose peace over principle. I chose to go along with those I disagreed with on core matters because I believed we were jointly fighting for other things that were more important. I ignored my gut and my moral compass.

"The result is that, almost to a man, every single person I cringed at or thought twice about, is now a supporter and cheerleader of Donald Trump."

Which doesn't exactly come as breaking news to those of who've been outside the GOP writing about what we could see and hear with our own eyes and ears for decades.  Because weren't "crying wolf" you pinhead, we were sounding the alarm.  Because for decades the worst kept/best denied secret in American politics is that without the bigots and the imbeciles and the homophobes and the xenophobes and the ammosexuals and the "All Tax is Slavery" Libertarians and, of course, the Evangelical Christopaths...there is no fucking Republican Party.

But you know what?  You're right, Charlie.  Your Republican Party wasn't entirely made up of racist, rage-drunk goofs.

Only most of your party was.

The rest of you were content to be racist adjacent.

Willing to cultivate them, flatter them, indulge them.  Whisper pretty things in their ears to get them to the polls.

More than happy to be their allies.

But do you know what you call two Klansmen and two Principled Conservatives huddled together around a table plotting how they're going to grab power, Charlie?

You call it four Klansmen.

I Am The Liberal Media!

Speaking of Sharia law, look who's trying to cram it down the nation's throat now. It never was the libtards, but it was and is Charlie's mfrering GOP. 75 million pos.

Knocked it out of the park. And just like Sykes, when I use a similar analogy to the two plus two equals four, they hang their heads and walk off.