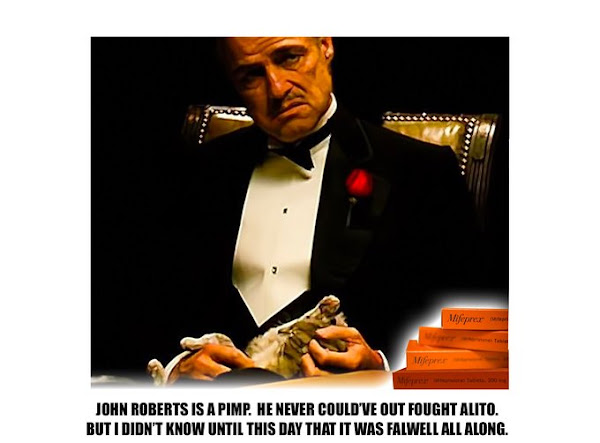 "Jesus Christ, the one thing every shit-apple redneck is guaranteed to take with both hands and left foot is money."   -- Raylan Givens, Justified

I think it might have been Schlafly all along. But they're both horrific people, so point made.

Hi there. Ima send you an email of a story you might be interested in, that happened to us last night at the grocery store.
The goddamn Republicans are terrified of the backlash to the destruction of Roe in proportion to the sheer volume of "don't worry, nothing's gonna change" and/or "Roe won't be a major factor in the November election" bullshit they are frantically spewing in every direction.
Rand Paul can fuck right off.
I read some of that Schmidt freak out and sort of wondered what burned his duck, thanks for clearing that up.
I filled out my primary ballot and promptly forgot to take it to town and mail it last night, but as it turns out I will have other opportunities to do so.
Kinda weird election this time. Out here in rural Republican California, about half of the local races are goddamn Republicans running unopposed, and there was this one guy running for county supervisor who had campaign signs and mailers all over the place and I spent a half hour with the Google and was unable to discern his party affiliation. Luckily enough there was an honest to god Democrat running against him for me to vote for. And our district is brand new but our awful, awful rep, Tom the fuck McClintock is still running to represent it, and this being Republican rural California, he will likely win. I voted for a Democrat running against him who I had never previously heard of. I was hoping that the redistricting would give me an exciting candidate like Dr. Kermit Jones, but it turns out he's running in the next district over.
At least I had Tony Thurmond to vote for in the school superintendent race.
Thank you again for the podcast. Briana is still in a cast, but seems to be better this week than last, so that's a hopeful sign.