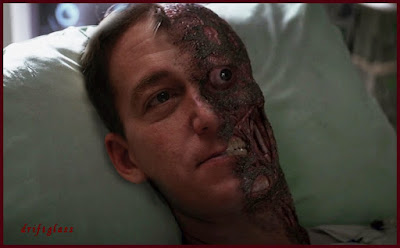 Perhaps for a hollow, venomous monster like Greenwald who loves nothing and no one it is impossible to imagine why violence done to children -- violence that that has been aided and abetted by the American fascist party which he serves so dutifully -- would provoke sadness and fury among normal humans.

This was a typical of posts by me on the subject of Glenn Greenwald back during the before time:

Whenever There Is Some Headline-Grabbing Barbarity...

...somewhere in the world that is in some way related to those who pervert Islam to serve horrific ends, you can always -- and I mean always -- count on two things.

First, America's premier, globe-trotting, indignance-chasing attorney (who, somehow, is still not being held incommunicado in some lightless super-max prison cell) will be johnny-on-the-spot to set up his card table right in the center of it so he can angrily pamphleteer passer's by about the real tragedy.

And, second, virtually no one in either the mainstream media or in the allegedly fearless Liberal blogosphere will dare to whisper a single discouraging word about Mr.Greenwald's relentless, Westboro Baptist Church-level of tragedy-trolling...

Go back to before the Boston Marathon bombing and you will find this is always Mr. Greenwald's MO.  A terse paragraph to perfunctorily acknowledge that, yes, whatever happened was a real shame blah blah blah...

...then up goes his revival tent right on the still-bloody ground, after which comes the shouty 63 paragraph sermon on what the real crime here was. Which -- always and without exception -- will be one of Mr. Greenwald's two pet issues...

And boy howdy did ol' "droneglass" ever take seven kinds of Hell from my alleged "allies" for writing such things.
But I never stopped.
And I haven't changed.
And Greenwald hasn't changed.
But his fanboys?   Ay erstwhile "allies"?   They have changed quite a bit.  For the most part they all seem to have all slunk back into the shadows, where, like the Teabaggers of the Right, they have quietly burned their Greenwald Cult merch and are anxiously pretending that they never even heard of Mr. Spleenwald.
Burn The Lifeboats

Of course, Glemm Greenwaldovich never had a traumatic experience which modified his good nature to that of Two-Face. Glemm lustily supported the Iraq and Afghan Wars because he trusted W(orst POTUS) to blow up brown muslims, whom Glemm hated. Then sensing things were blowing away from jingoistic rah-rah warmongering Glenny deleted his blog posts and embraced "Progressivism"... This caused a lot of Dirt Bag Leftists and holier than thou Broocialists to spit upon Democratic candidates and "reluctantly" vote for Republicans (aw, shucks) as Glenn spewed and continues to spews hatred at Biden the same way he did at Barack.

Glenn is as left as a British Steering Wheel.

Ran into a Spleenwalder today, trying to convince everybody that the Dem Party is the source of all the problems and they NEED to start giving things to the Spleenwald horde or they'll be forced to vote Republican...

"Glenn was right in 2009 when he was pretending to be a progressive, because he gave me a wonderful excuse to not vote Dem and complain about how they're not progressive enough! So what he did prior to that and after that is irrrelevant!"

Some Democrat or parent or somebody needs to make a speech that's memorable, and knocks this "political" trophy disinformation concept out of their damn teeth and stamp on it, so that everyone sees.

Watching that face twerking garbage bedding Ted Cruz solemnify his refusal to make sense following the killings, by chiding the reporters with their politicizing of even this, politicizing even the death of children, and then seeing him at the church that night made me wish those parents could turn to him as one and consume him. Of course he is heavily protected, throughout all of this by police and bodyguards.