Shelter Culture (tm) is my trademarked antonym for "Cancel Culture" -- to describe organizational cultures which actively protect smarmy always-wrong hacks who definitely would have been sacked for incompetence long ago in any other enterprise.  Personally, I prefer “Cultured Pearl Clutching Culture” (tm) but it doesn't exactly roll off the tongue, or “Cloister Culture” (tm) but too many people have no idea what “cloister" means.

So Shelter Culture (tm) it is shall be.

Anyway, over the last week Beltway Shelter Culture showed itself to be as aggressively determined to defend the careers of Beltway insiders as ever.  They are reputational Tarn-X for every pundit goof who, by all rights, should have been a has been a decade ago.

Let's start with Stephen F. Hayes, whose resume top-line is the book he entitled, "The Connection -- How al Qaeda's Collaboration with Saddam Hussein Has Endangered America."

"Stephen Hayes's bombshell Weekly Standard piece on this topic was cited by Vice President Cheney as the "best source of information" about the Saddam-al Qaeda connections. Now Hayes delves even deeper, exposing the inner workings of America's deadliest opponents and providing a clear-eyed corrective to reams of underreported, politicized, and just plain wrong information.

The Connection is both a gripping snapshot of the War on Terror and a case study in how bureaucratic assumptions and media arrogance can put us all at risk."

And for the stupid who need pictures, the cover features a pictures of Saddam Hussein and Osama bin Laden, both circled in red with a big, red line connecting them and running through the word "Connection", just as you would find on any crackpot conspiracy nut's corkboard.

This is from his Harper Collins bio:

Stephen F. Hayes is a senior writer for the Weekly Standard and the author of the New York Times bestseller The Connection: How al Qaeda's Collaboration with Saddam Hussein Has Endangered America. He has been a commentator on many television and radio broadcasts, including the Today show, Meet the Press, the Diane Rehm Show, Fox News Sunday, the O'Reilly Factor, and CNN's Late Edition. His writing has appeared in the Los Angeles Times, the Philadelphia Inquirer, the Wall Street Journal, The National Review, and the New York Post.

Hayes' only other book is a flattering biography of Dick Fucking Cheney.

Of course, that bio needs a bit of updating.  Mr. Hayes was bumped up to Editor-in-Chief at The Weekly Standard after Bloody Bill Kristol became Editor-at-Large and went off to ABC News to peddle his lies there.  Hayes then lost his Weekly Standard gig when the magazine was shuttered by the owners after their pro-Trump readers began leaving in droves.

Hayes then went off to do good works, and clean bedpans at Bethesda Naval Hospital until he had sufficiently repented for helping to lie the country into the Iraq War.

Hayes was then hired by -- surprise! -- Fox News!  Where he has been gainfully employed until five minutes ago when he discovered that Fox was full of naughty-bad lunatics, frauds and outright fascists, like Tucker Carlson, who -- surprise! -- had actually worked at The Weekly Standard as a contributing editor under Stephen Hayes.

Such a small world, no?

You guessed it.  From Variety:

And then there is the matter of Mr. Steven Schmidt, who has tripped over his own dick and publicly set fire to his own career more times than I can count.  Certainly more times than would be forgiven and forgotten in any other line for work.  But clearly, as long as his old Bush regime pal Nicolle Wallace had a beachhead at MSNBC,

Looking forward to joining @NicolleDWallace and the @DeadlineWH crew on @msnbc in the next hour.

eventually Mr. Schmidt will always be added back into the mix:

Which brings us to one of the most consistently and fundamentally ridiculous beneficiaries of Shelter Culture.

Regular readers know that documenting Mr. Dowd's long record of fundamental ridiculousness has been a staple of this blog for many years now.  A staple which Mr. Dowd did not appreciate. 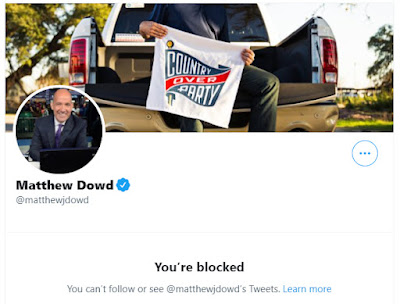 If you're interested, a recent example of my own little genre can be found here:

Matthew Dowd is a Fundamentally Ridiculous Person: A Series of Miraculous Conversions

It's from nine months ago and begins as follows:

This was Mr. Matthew Dowd auditioning for a permanent gig on MSNBC a couple of days ago.

Has this near the middle:

But if you follow the antics and pronunciamientos of Mr. Matthew Dowd on the Twitter machine as he auditions for a permanent gig on MSNBC and shops article to USA Today, you will find, trailing in his wake, a large number of humans who are positively ecstatic at his bold-bordering-on-radical truth spewing.

And ends on this note:

At which point, Matthew Dowd had another one of his miraculous, overnight conversions.  The King of Both Sides Do It is suddenly the King of Both Sides Don't!  And he is now free to expound at length about the evils of Both Siderism from the safety of little nest that his fellow Bush Regimes Dead-Enders have made for each other on the MSNBC network: a secure bunker where Mr. Dowd can be sure that none of his colleagues would ever be rude enough to bring up his past.

Except maybe now, just among us, we can stop pretending that these "conversions" are conversions at all.

These are merely an actor changing costumes.

And in his most recent costume change, Mr. Dowd has wiped off the ABC News greasepaint, grown a beard, thrown on a pair of Michael Stipes' glasses and, bingo, Bill the Butcher is now The Great Emancipator.

So you, dear reader, have no business acting all surprise at this headline from Ad Week yesterday:

If you’re a consistent MSNBC viewer, you’ve likely seen a lot of Matthew Dowd as of late.

And when MSNBC found it suddenly had an extra hour of morning programming for some deserving soul, what fiery Liberal visionary did they gift it to?

Stephanie Ruhle is replacing Brian Williams on the weeknight MSNBC broadcast ‘The 11th Hour,’ and the show ‘Morning Joe’ will expand to four hours

But of course, you already knew that.

I understand but kinda don’t why NBC thinks it’s flagging liberal audience thinks liberals want to hear from former enemies of basic common sense and decency, who, like Schmidt, happen to be boring as all hell and recite nothing illuminating that hasn’t already been generally agreed to on the left as common knowledge long before the werdsalad is uttered on air as something we should inform ourselves with. How long before the “cool, smart republicans are actually our friends!” wears off? I stopped watching everyone except Maddow on occasion years ago. God forbid we give actual liberals with track records of knowing what the hell they're seeing, hearing and talking about a presence a seat at the telly table.

Guess there is a media market for RINOS to speak out on the real Putin Republicans.

The same force that doesn't produce Qualified black NFL coaches. The same force that says a black man who is suspected of passing a $20 dollar forgery must be murdered in the street by police in front of everyone who is not allowed to interfere. The same that tell us black folks need to stand in line for 10 hours to get a chance to cast their vote, buy the people who all vote by mail. The same mentality that argues a black woman with more qualifications than Justice Cony Island or the justice who is pals with Squee and likes beer. is the same entity that says a black female cannot be on the Supreme court.

They can't do anything to protect kids at school against mass shootings, but the can ban books to preserve the white parents

I posted this comment over at the Field Negro a while back:

Since it was Steve the fuck Schmidt, I first read this as "furries"...

Steve Schmidt
@SteveSchmidtSES
·
Jan 25
Weakness, decay, corruption, division and delusion have a way of awakening the furies. Once awakened, history teaches us that their appetites are bottomless and it is very difficult to put them back to sleep