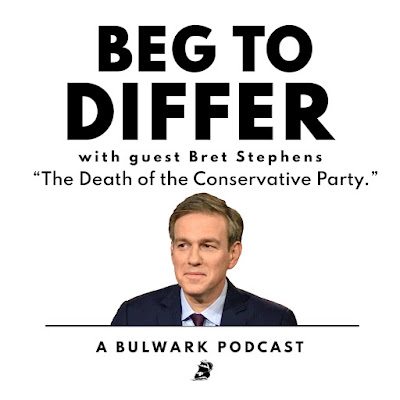 Well wonder no further.
First they all let their guest, Norman Ornstein, cook for a few minutes.  All stuff you already know.  The GOP is a cult.  Trump is a monster.  The base are racist zombies.  Party leaders are cowards and lunatics.  And none of this is going to stop being true anytime soon.
How bad is it?
Almost as bad as the sort of thing we might expect from the Radical Left sez Bulwark houseplant Linda Chavez!
Because they just can't help themselves.  Because hating us is so deeply hardwired into them that they cannot sustain a conversation for more than a few minutes about how fucked in the head their own political movement is without 1) finding some excuse to take a shot at you and me and, 2) implying that all of this is all a result of things that happened, inexplicably and spontaneously, "over the last five years" and is certainly none of their doing.
There followed much weeping and wailing about how all of Linda's life-long wingnut playmates have (sob!) abandoned Conservatism (sob!).
Sad!
Then, at the 25 minute mark, they handed the microphone over the Bret "Bug" Stephens, who stipulated that while he agrees with much of what Norman Ornstein said, well, strap in because here comes the 100% predictable turn

Stephens:  But there's a second reality that we need to address squarely...

Can you guess what it is! Go ahead.  Guess.

Stephens: ...which is that, in order for the moral bankruptcy of the Republican party to be exposed...

There's that word again.  "Exposed".  Exposed to whom?  Who exactly is there left in the polity that hasn't formed an opinion about the " moral bankruptcy of the Republican party"

Stephens: ...we also need a healthy Democratic party.  And right now I'm not sure we have it.

Congratulations!   You guessed it!  And once again another colloquy of our "allies" begins its descent into their favorite subject:  bitching that the Democratic party -- an institution which they built careers loathing and trying to destroy -- is being insufficiently responsive to their whims.

Stephens: I don't mean a morally healthy -- although that is an argument worth having -- but a Democratic party that in its own way represents the great liberal but squarely American traditions of FDR and Harry Truman and Bill Clinton...

Yes, in order to built his mighty Man of Straw, Bret Bug has waved Bill Clinton -- a man the GOP devoted itself single-mindedly to destroying -- into the pantheon of liberal "but squarely American" heroes of Democracy.
But wait!  There's more!

Stephens: ...and indeed, in many ways, President Obama.

That's right kids!  Now that he's safely in the rearview mirror and howling about him day and night is no longer wingnut career go-go juice, Bret Bug has nominated the Commie, death panel-pushing, granny-killing, no-flag-pin wearing Kenyan Usurper himself to join that pantheon of liberal "but squarely American" heroes of Democracy.
And why?
Because like all Never Trump grifters, Stephens needs the Stupids to believe that everything bad on the Right started five years ago and  -- because hating the Left is their only constant -- that those vile Democrats have somehow jumped the shark in tandem with the Trump GOP and are somehow complicit because they have not managed to disarm the GOP Doomsday Machine that Stephens and his cronies spent decades building

Stephens: Right now we don't quite have that.  And so the currently Republican party is going to gain strength simply because...

Because the base are reprogrammable meatbags who believe whatever Tucker Carlson shits into their skulls on any given day?  Because Stephens and his crones spend decades helping to train the base not to believe anyone who told the anything they didn't want to hear?

Because since I was a lil' wingnut Liberals have made my flesh crawl and the thought of throwing in with them makes me puke blood every night before I like a votive candle at the altar of St. Reagan?  Because I will do everything in my power to use my very large media platform to try and convince Democrats that the only way to save Murrica is to morph into the Paul Ryan party of my dreams?

Stephens: ...but I'm giving this advice to Democrats because I fear that their own missteps politically are leading to nothing except the strengthening of the Republican party in its current form.

He flogs us and berates us...because he just cares so damn much!
Then he compares Democrats to the Weimar Republic and we're off to the races!
Stephens goes on like this for some length.  Host Mona Charen endorses all of it and then...

Charen:  And it's an excellent segue into our next topic.

After kicking around the Democrats for awhile, can you guess what the next topic is?
Go on.  Guess.

Charen:  So the situation with the Democratic party is something I'd like us to turn our attention to.

You guessed right again!  Good for you!

Charen:  Because I've been saying many of the same things that Bret just said.  In fact I was at a meeting of Liberals and Conservatives who get together every six months or so to discuss how we should move forward and try to save democracy in these difficult times...

Why won't you tell us which of the many Third Way/Both Siderist gift shops it was where you scored the primo straw for your straw man Mona?  If I guess right will you tell me?
Was it Country Over Party?
Country First?
Third Way?
The Third Man?
No Labels?
Outlaw Country?
The Purple People Eaters?
Susan Collins, Vampire Therapist?
The Cook, the Thief, His Wife & Her Lobbyist?

Charen:  ...and when I gave a little speech the them about how, basically, the one and only job of the Democrats in power is to govern in such a fashion that the current iteration of the Republican party doesn't return to power, um, it didn't go over well.  Let's put it that way.  They don't see it that way!

You know what?  I've changed my mind.  Whatever outfit it was that booed Ms. Charen is an outfit I'd be happy to join.

Ms. Charen then went on to charge Democrats with "dereliction" for not dropping everything else and going about fixing the Electoral Count Act, and turned to Norm Ornstein for support.

Except Mr. Ornstein said, nope.  And good for him.

Because while reforming the Electoral Count Act may be necessary, it is nowhere near sufficient.  Because the real danger is coming from battleground states where Republicans control the government and are passing state-level laws that would permit them to just throw out election results they don't like.

Brief aside: Ironically, the only federal remedy to a rogue state that decided to ignore the will of people and declare the loser of an election to be the winner would be the (you guessed it) Electoral Count Act.  So you need to fix all of it, which included passing some version of the Freedom to Vote act, which is exactly what Ms. Charen is scolding Democrats for trying to do.

This revelation doesn't slow down the Bash The Dems brigade

After awhile the intellectual darling of the Never Trump cult, Yuval Levin, was dragged into the discussion because he wrote a column in The New York Times scolding the Democrats.

Brief aside:  Never one to let a Democrat-basing bandwagon go unjumped-upon,  David Brooks hurried out his own Copy/Paste/Change version of the same column:

Why Democrats Are So Bad at Defending Democracy

Norm Ornstein, bless his heart, brought a satchel full of receipts and methodically debunked most of these talking points.  And you know what?  It didn't make the slightest difference.

Because your Never Trump allies wanted to spend the one-year anniversary of the bloody GOP Insurrection doing what they do on every podcast: getting tipsy passing around a jug of their favorite rotgut talking points and bitching about how Democrats were not catering sufficiently to their priorities.   And that is exactly what they did.

I'm sure there's a lesson in there somewhere.

I almost fell out of my chair laughing. My (apolitical) roommates wanted to know why, & one of them went to The Bulwark out of disbelief. Crom, I love your work...

It's all too late isn't it. I think I had it in my head that before the last 4-5 years there was still a chance there could be some reversal of the rightward tractorbeam but I don't think so anymore. The country is actually going to fracture and or enable authoritarianism. I never thought about leaving the country before but I'm thinking about it now. I'm cynical as all get out but I'm a fairly optimistic person. Unfortunately I don't see any real hope in the situation and I don't think we're going to turn it around until we go through the crust, mantle and core of this country. Sorry to be bleak on a Sunday.