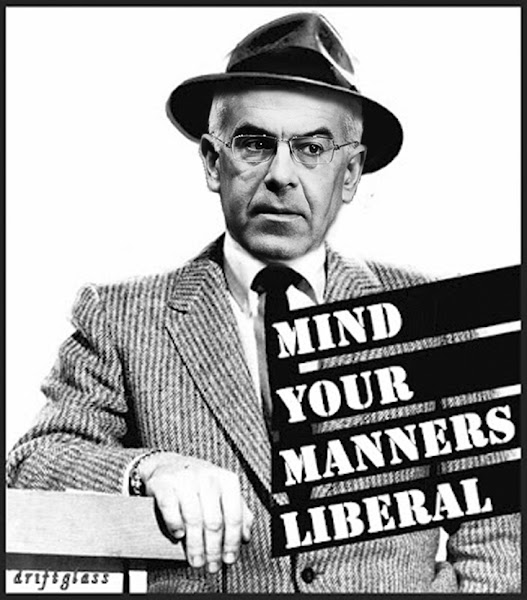 Rather that writing my 700th or so (no kidding) Sunday Morning Comin' Down column detailing the weekly crimes committed against journalism and democracy by the Sunday Shows, today let us speak for a minute or two about why you and I and everyone we know already knew what this weekend's Sunday offerings would be and why.  Because the Sunday Shows are nothing but  a flatboat that sails down the wide, polluted river of American political punditry every week, always bearing its load of hackneyed opinions with the current and never against it.

So, if during the preceding week you had been monitoring the strength and direction of that wide, toxic sludgeflow, you would have known that the American political punditocracy was not troubled by the now-out-and-proud racism of the GOP or the fanatical obstructionism of the GOP or the fact that the GOP has turned their base into Freedumb's own plague rats in order to extend the pandemic and kneecap the Biden administration or the GOP's ongoing, coordinated, nationwide campaign to finally rid themselves American democracy once and for all.

None of that fazed them, because they don't live in the same country that you and I do.  They are Plato's Stepchildren -- powerful beings whose power comes from the lovely walled garden in which they all live and where they speak only to one another:

And thanks to the power that walled garden grants and the protection it provides they can safely revert to the full-on "Why is Obama being so divisive?" and "Why won't Obama lead?" mode on which they coasted for eight, lazy years.

But of course, now it's Biden who is failing because he refuses to use the magic Green Lantern powers which all Democratic president secretly possess but refuse to use

He thought he was merely appealing to his base. He might have united the rest of the country against him.

Democrats, you may not like this column from ⁦@Peggynoonannyc⁩ but there’s a lot to learn from it. https://t.co/q1gBKBByUZ

Then Brooks advances the Beltway pundit party line using one of the many, many platforms where he is a revered Elder Pundit:

...to which @nytdavidbrooks replies "I do think rhetoric like comparing Republicans to Bull Connor & Jefferson Davis is not helpful. It's not 1861 anymore. I even think the trope he has that, 'well, the Georgia law is Jim Crow 2 is also not helpful.'https://t.co/1o40bmB0tM

Then there was Mona Charen's podcast: 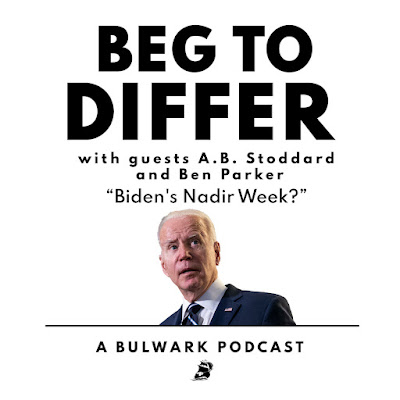 And Charlie Sykes and David French: 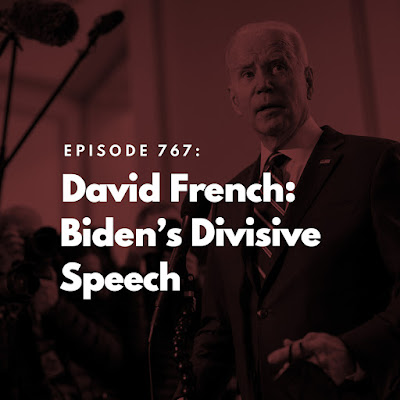 Bret: It’s another depressing sign of Team Biden’s political incompetence. How did they think it was a good idea for the president to go to Georgia to give his blistering speech on voting rights without first checking with Kyrsten Sinema that she’d be willing to modify the filibuster in order to have a chance of passing the bill? And then there was the speech itself, which struck me as … misjudged. Your thoughts?
...
Bret: I meant Biden’s suggestion that anyone who disagreed with him was on the side of Jefferson Davis, George Wallace and Bull Connor. The increasingly casual habit of calling people racist when they disagree with a policy position is the stuff I’ve come to expect from Twitter, not a president who bills himself as a unifier. And again, it’s political malpractice, at least if the aim is to do more than just sound off to impress the progressive base.
...
Gail: Well we are in total agreement about the Electoral Count Act of 1887. Back to Kyrsten Sinema for a minute — nothing is going to induce her to do anything that would threaten the filibuster, also known as the Rule That Makes Senator Sinema Marginally Relevant.
Bret: You won’t be surprised to learn that I like the newest Arizona maverick more and more...

No surprise that Chuck Todd lined right up to speak the holy words (via Brother Charlie Pierce):

Confronted by the monster’s indulging in its rage, which it builds within itself by repeatedly declaring itself unloved, much of the elite political press hides behind politesse for which the monster has no respect anyway. Chuck Todd tweeted out a lament that the president hasn’t been able to cobble together a coalition with Republicans to pass voting-rights legislation, instead of noting that voting rights have no constituency within the Republican Party anymore. The monster has devoured it.

One of the punditocracy's more unflushable turds of nepotistic smarm -- Matthew Continetti -- was apparently been paroled from Trump-supporter jail long enough to bob to the surface of Chuck Todd's Meet the Press Panel and smirk some advice about how Joe Biden needs to get much more Centristy hurryupquick, while Andre Mitchell cried bitter tears over Joe Biden using impolite language to describe the behavior of Republican monsters.

And speaking of Meet the Press ...

... just last night I happened to catch David Gregory's Ghost of Meet the Press Past act  on CNN where he demonstrated that he can still shake his huge, simian noggin and tsk-tsk Democrats for their "divisive" tone just as well as he could back in his glory days (h/t Crooks & Liars):

ERIN BURNETT:  So let me ask you one other point because you know the majority whip James Clyburn today said there are more than two Democratic senators who would oppose changing the filibuster. The others oppose it but haven't been -- had to take the heat for it.  And then, but the two that oppose it, it's Manchin and Sinema and the one who takes the heat for it and the anger and the ire and the personal diatribes is Sinema. Why do you think that is?

DAVID GREGORY: I don't know. I mean, you know, misogyny, for one. She is a woman. Sexism. But I think there is -- I mean, I think any Democrat who is getting in the way of this is -- is focusing -- men and women -- are getting the ire of progressive Democrats. I don't think that they were -- were prepared for the fact, um, that, you know, they just didn't have the momentum behind this to bring this forward. Look. I think the -- first of all, I thought the president overdid this speech. It was way overcooked. Basically, saying you are either for this or you are a racist, which I don't think was a bridge-building effort. I think the President and the White House made a decision. They knew they didn't have the votes, they were going to go for the argument, whip up the base and I think that's what they felt they could do at this point but the reality is Democrats are taking a hard look at this. There is not enough support to do it.

Because as I wrote in September of 2016, right now we're marching towards the Edmund Pettus Bridge.

And since you cannot, cannot, cannot be on both sides of that conflict, this was a demand that each member of the senate look history and their constituents in the eye and declare which side of that bridge they are on: 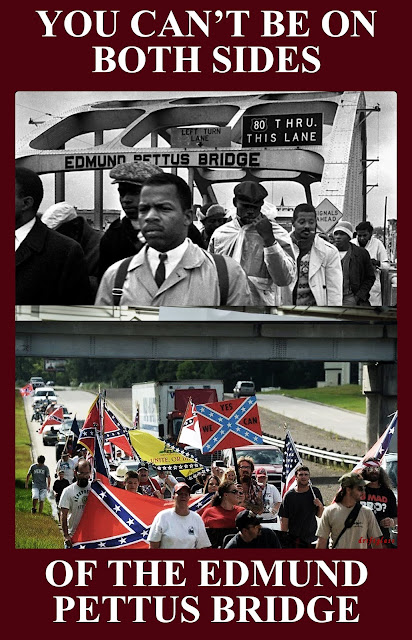 Dems are never going to get a fair shake from the MSM. The problem isn't certain people like Chuck Todd or David Brooks. It's NBC and NPR and NYT. We need to intimidate them like the Republicans have for the last 40 years.

"Then Brooks advances the Beltway pundit party line using one of the many, many platforms where he is a revered Elder Pundit: ...."

Blame Judy Woodruff and her PBS-lite both-siderist fair & balanced BS here. C'mon, she had to know his reply was dismissive straw-man crap and yet she gave it the platform this time. Brooks does what Brooks does, he sez scared & stupid stuff. She shouldn't be legitimizing it by tweeting "...to which @nytdavidbrooks replies:"
And beyond that, I still don't understand why he's even on her program at all. I mean it's kind of amusing to see him just one weakened moment away from sharting his khakis every time he opens his mouth, but amusing ain't always fun. He's freakin' awful and Woodruff and PBS oughta be ashamed.

As the disgruntled republican prostitute Coulter cannot sue Trump and republican's for her pay for service and she at her pruned age has no market value.

She gasps a last breath of despair over Trump is a loser and fading away.

It won't get her the back pay for her kneed expertise.

She will go much more quietly into the night than she thinks.

Of course, no mention by any of the pundits about Joe Manchin's voting rights bill which was supposed to be able to get a plethora of Republicans of good moral standing and conscience to support it. And having been kicked right in the nads by every single Republican I guess the Democrats are supposed to just grin and bear it and pretend there are any Republicans left who care about free and fair elections anymore.