Listening to Joe Walsh Interview Cenk Uygur of The Young Turks is Like Unto... 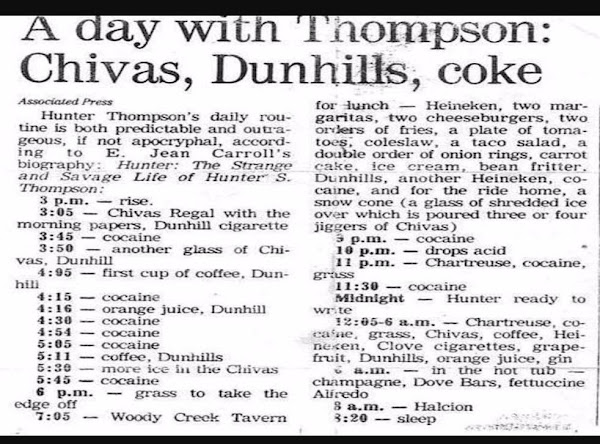 ...chugging some exotic, multi-tiered drug cocktail that Hunter Thompson might have mixed up: a pleasant buzz that takes you up and up, followed by a brutal nutpunch of crazy.

At the front end, their observations about the inner workings of the media are spot on.  There is apparently (smiles) a "club" out of which you will be cast if you're not 100% down with the corporate party line.  MSNBC allegedly tried to put Uygur out to pasture by offering to pay him twice as much as he was making for his weekday show, but exiling him to the weekends, so he walked.  Walsh couldn't make the transition from "Libtards are the Worst.  If Trump Loses, Grab Your Muskets and Follow Me!" to "Trump is a Golden God" so he was shown the door at Clear Channel. Also, if you want to hear Walsh drone on for 15 minutes about how courageous it was for him to quit/be bounced off of Team Evil -- I lost everything! I lost all my fascist friends!  Nobody at the Ministry of Wingnut Propaganda wants to gimme a job! -- this is the podcast for you.

However, at the back end comes the crash in the form of Uygur's performance as Shouty, Bernie Woulda Won Reenactor.  A lot of history had to be carved up and buried deep for Uygur's story fit, and he leans into it with all his voices.

As he tells is, Bernie would have easily swept the field were it not for Barack Obama (who, according to Uygur, was behind the scenes, pulling all the strings and barking all the orders) and James Clyburn (who, according to Uygur, is the worst hack and phony in history.)  Clyburn somehow tricked all the black voters in South Carolina who were foolish enough to trust into voting for Biden, and then the mainstream press -- under orders from Obama -- brainwashed the rest of the Democratic base into following suit.

There's other stuff, but this isn't a transcription service.

Anyway it's quite the ride.  I can't recommend it, but you should know that such a thing exists.

It's about what you'd expect from a guy who decided to name his show after the guys whose claim to fame is the Armenian genocide.

Oh, and Thompson would likely still be with us if he'd stayed away from the tobacco and ethanol, so maybe don't dope-shame.

In the memorable words of my companhon Giraut Leones, I'd rather feed my genitalia to rats a piece at a time.

Hey, I don't have any great magic or intuitive powers.
But the few, very few, times I watched Uygur, there always seemed to be something off or lacking there. I mean what's the point? Where's the insight or special understanding?

I come here because of the quality and your depantsing of the whole meritocracy bullshit. We live in a world governed by nepotism and who you know and not by how actually good your stuff is. Yours is good. Sorry, don't expect to get rewarded.

How is that any different from our dementia-challenged ex-you-know who? Or any of his minions in the House of Representatives Dimwit Caucus? Reality TV thy name is THE AGE OF BULLSHIT.

Like Bill Maher can hit some of the correct notes when he plays his entertainment Banjo. So to has Uygur.

Uygur is on Identity Quest. He used to be "conservative" which meant republican. He had enough self awareness and self worth with the help of many around hi to go through republican rehab.

It is not easy to severe the habit and change. It is a process and he is on his vision quest. With past tendencies nipping at his heels.

It is never pretty to with such transformations lie and loud in media where Uygur dwells and aspires for a living.

Turning news into opinion (his) and trying to convince other to follow because following is of course zombifying and sheeple that get sheered.
As for Walsh who snivels But that could mean laboring with physical labor and Taco Bell does not care for their about news opinions.. that no one will hire him. Has he applied at Taco Bell? How about Amazon Warehouse I hear are hiring.
Where is the Department of nepotism employment hiring and resources when you need it.

Let me put it this way, I would listen to the Uy7gur Turks before tuning into FOX, NewsMax and their ilk.

The thing is, I do not have to listen. doing the ding a ling in front of the store next to the kettle does not ring my bell.

No way was the Hunter consuming all that food if he was doing all that food.
And man oh man, look how Barack Hussein Obama still has the horseshoe in a tizzy fully five years after he split the scene. It was just recently that Ben Shapiro and friends were lamenting the death of rock music at the Black hands of the former President. lol both Cenk and tRUmp still consider Obama the leader of the party. For the most part both are full of shit

But in this case, they are right.

That's why Dems are taking the country back.