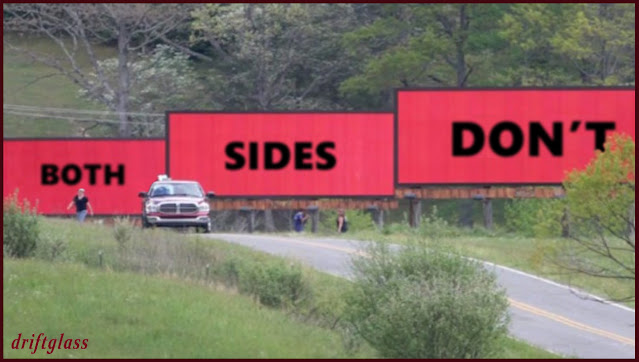 First, let's look at the initial disaster.  The place where our modern democracy's containment system failed and allowed the Right's poison to contaminate everything.  For that we turn to the Los Angeles Times journalist who assays her profession over the past 30 years and asks, "Holy fuck, what have we done?"

Column: Why journalists are failing the public with ‘both-siderism’ in political coverage

For years it was easy to cover “both sides” — Republicans and Democrats — as equally worthy, and blameworthy, partners in democracy...

Now, when reporters or pundits use the words “both sides” in regard to some political problem, I stop reading or listening.

I started to chafe at false equivalence a quarter-century ago, as a congressional reporter amid Newt Gingrich’s Republican revolution. One party — his — was demonstrably more responsible for the nasty divisiveness, government gridlock and norm-busting, yet journalistic pressure to produce seemingly “balanced” stories — pressure both ingrained and imposed by editors — prevented reporters from sufficiently reflecting the new truth.

By 2012, as President Obama dealt with the willful obstructionists, conspiracists and racists of an increasingly radicalized Republican Party, political scientists and long-respected Washington watchers Thomas E. Mann and Norman J. Ornstein put the onus for the dysfunction squarely on the GOP in their provocative book “It’s Even Worse Than It Looks.” Significantly, they implicated journalists: “A balanced treatment of an unbalanced phenomenon is a distortion of reality and a disservice to your consumers."...

In other words, yep, the Left was right about the Right all along.

Second, we look at the freaks of nature that this poison created.  The three-eyed fish and seven headed goats and a small clique of  Elite Conserative mutant pundits who A) actively helped to create the disaster, but who B) have climbed over the the Left and, with the help of savvy Liberal media person, now stand on a big flat media rock slightly above the toxic Conservative sludge they unleashed, still pretending that they had nothing to do with any of it, still using their media platforms to shit all over everything you and I believe in, and still tsk-tsking, you guessed it, Both Sides!

From Charlie Sykes at The Bulwark:

The Problem with the “Red Dog Democrat” Thing

The spending. The wokeness. The repeal of the Hyde Amendment. I could go on…

These are difficult times for folks on the center-right, who’ve tried to join Democrats in a loose alliance to protect the Republic from Trumpism.

In fact, this odd coupling has proven to be more than a little awkward at times. Some on the left are willing to embrace Never Trump conservatives as allies, until they realize that some of them are actually… conservative.

There is also a pretty consistent drumbeat insisting that we all actually become Democrats — or at least vote straight ticket. Litmus tests are applied: it’s not enough to be pro-democracy, NTers are also expected to embrace the elements of the progressive agenda — from free community college, to abortion, rent moratoriums, police funding, transgenderism, CRT, social spending, and the candidacy of Greta Thunberg for sainthood.

Which serves as a companion piece to this podcast, the title of which --

Proving yet again that you can take the Bush Regime Dead Ender out of Fox News but you can't --  "the progressive agenda — from free community college, to abortion, rent moratoriums, police funding, transgenderism, CRT, social spending, and the candidacy of Greta Thunberg for sainthood" --  take the Fox News -- "The spending. The wokeness. The repeal of the Hyde Amendment" -- out of the Bush Regime Dead Ender.

And what do these entitled, myopic Bush Regime Dead Ender mutants want?

So where can these mutants lay their eggs now that they've made a desert out of their Conservative paradise?

Obviously the only place left is in the belly of the only relatively sane national political party still standing.

Which a question which Anand Giridharadas has been exploring, on and off, this year and our third headline in today's triptych:

The most fortunate refugees on earth are those defecting from the Republican Party. You see them on the news; you enjoyed their Lincoln Project ads; maybe you bought the book one wrote to cash in on telling the truth now that it was of scant use to us.

Politics is, as the saying goes, a game of addition. So, on one level, you want anyone you can get to abandon Team Tyranny and sign up for Team Democracy. But then it gets more complicated. Should these recent converts not only vote with you but also lead? Should they be the ones representing the pro-democratic position on television?..

So how exactly does a small clique of Conservative mutants who have defined themselves their entire adult lives by a sneering contempt for Democrats go about colonizing the Democratic Party?

First, with the help of the Beltway Media, by continuing to go all-in on the core Both Siderist lie that Democrats are just as dangerously captive to some extreme wing of their party as the Republicans are.

And second, using the massive media presence they have been gifted, by hammering home, over and over again, that while our democracy may be in peril and that the only thing standing between us and 1,000 years of fascist darkness may be the Democratic Party, that the Democratic Party just isn't up to the job because it suffers from a dangerous overdose of Democrats!

And what is the only cure for what's wrong with the Democratic Party, and thus the only hope of saving democracy itself?

An immediate and massive infusion of Sensible Centrism!

And just who exactly are America's only factory-certified representatives of Sensible Centrism?

When you can't align with the people who equate mask mandates to Nazi Germany — or with people who get triggered by the Federalist Society — where does the Rational Center belong? Bill Kristol joins Charlie Sykes on today's podcast.

No disrespect intended and archeology is interesting but what is the plan when the Confedifacists take over?

General strike is the only viable plan.

The finger-pointers have roamed the beltway since FDR. They were generally ignored for their constant opposition rhetoric. Nixon seized the opportunity to lie and harness the bigot vote with impunity. Carter faced the mobilized Right and a media that believed its own hype. That set the table for false-equivalency to metastasize across the political spectrum. Thus spawned St. Ronnie's voodoo econ crossover into Opposite World which begat today's POG. Still pointing fingers, but mainly to keep attention from the blood on their hands.

As sides go. You got Dems, Repubs and independents for the most.
The twain between Dems and Repubs puzzles me.

I know where dems basically are. But those republicans?

Someone is going to have to seriously laying down the over arching Conservative principals of them.

Not sure if they can be one side of anything.

Both sides do not call American Vietnam War Veteran POW's worthless especially if your carrying around 5 deferments from that war because of brain spurs.

They told use they were fiscal responsible. They repeatedly show us it is not true.
They tell us they are the most faithful and religious yet they sin amok.
Law and order. The republican president can extort a foreign country using the presidency for his personal gain as long as he has a single lawyer out of the battery of lawyers and that single lawyer is named Rudy.

I will stop here because it is a long list and any reasonable person would agree.

I have no idea of what they stand for in principal.
They have no honor . They can tell you the truth of what is in their head in public and then lie they never said it.

Seriously, What side are they on? Define that side?