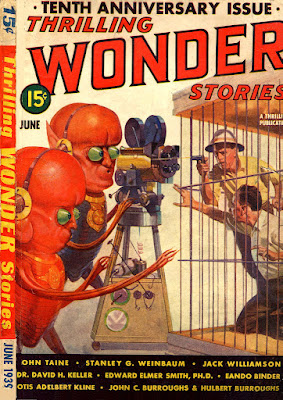 “Not being heard is no reason for silence.”

Point of semi-contention, re:Bill Clinton: It wasn't just because they didn't have Communists anymore, though though redirecting to the new Big Bad was part of the process (see Ed Meese's convieniently-widely-publicized speech about "political correctness" at the precise moment in history that even the most dinosaurine "Main street" conservative could believe the "the left gets its marching orders straight from the Kremlin" trope anymore.

The reason the Right hated Clinton was because he was their worst nightmare: not because he was super-lefty, but because he wasn't: he was an OK-with-the-death-penalty, end-"welfare as we know it" Democrat from a southern, "pro-business" "right to work state. He was a Democrat who accepted the basic framework of Reaganomics the way Eisenhower had accepted the New Deal framework. Even when he raised taxes, it was a modification of Reagan-Bush changes, not a return to pre-Reagan norms.

Clinton was the guy who could make squishy conservatives who actually believed the "small government, lower taxes, and fiscal responsibility" prolefood declare victory and go home. And if the squishes did that, Movement Conservatives would lose any chance they had of fulfilling their Mission: to destroy every last remnant of the New Deal, any populist stuff left over from Teddy Roosevelt, and restore the unbridled Divine Right of Wealth & Power of the Gilded Age.

Typo fix: _NOT_ "even the most dinosaurine"

Clean air and water. Just went a few rounds with a troll who tried to claim that the regulations California has enacted (fossil fuels out of the electricity grid by 2045) are counterproductive and will never happen anyway.
At which point someone else broke in saying "Too late, they already work; forty years ago you couldn't see the hills from LA and today you can."
My take was that the regulations will eventually be complied with, and the sooner you enact them, the sooner they will be complied with, as long as the political will exists, and if we had enacted them forty years ago instead of electing Ronald the fuck Reagan, it would already be done.
Sometimes you have to act in advance of what you want to happen.
Big storm on the way. The ground is still wet from the last rain, so perhaps we've dodged the wildfire bullet for yet another year.
I still feel like the goddamn Republicans are rallying around Fergus because he's the only thing they've found that can successfully distract all of the right attention away from the atrocities they are always pulling 24/7/365. They feel like, "Well, he's a creep and all of that other stuff, and that is obviously what y'all want, because you sure do hang on his every fart and pimple."
And he makes a good false comparison for them. Liz Cheney is not any better than Fergus, functionally, but as long as he's around she sure looks like she is to an embarrassingly large chunk of the population.
Thank you again for the podcast, and happy birthday to all of the appropriate birthday havers.
I turn sixty one in December, and I already have Medicare as a result of the disabling stroke I had thirteen years ago. Medicare is great, but not worth the chunk of my brain that I lost getting it, so ride herd on your blood pressure and eat as healthily as you can manage. Also, don't get it into your head that you're tough or any such horse shit. Doctors aren't something to be scared of or disregard the advice of. It turns out that they do actually know stuff, and some of that stuff can save your skinny, white butt if you listen to it in time.

It punishes those wwho lack wealth. To afford travel. To afford lawyers to defend against lawsuits.

If they meant what they say that Abortion is all sinful and no one should have them. Why do they make such a law that wealthy can easily have their way if they wish. No obstacles for them.
But like their guns for everyone everywhere laws.
A criminal is going to get a weapon anyways so make it easier for everyone to get them.
They do not use that same notion with ablution.

:If you ban abortions then only outlaws will have them.

Like with Free trade. They tell us they cannot negotiate labor treatment in trade deals but they can definitely negotiate everything else.