The Centrists, Episode 1: The Dawn of Just Us 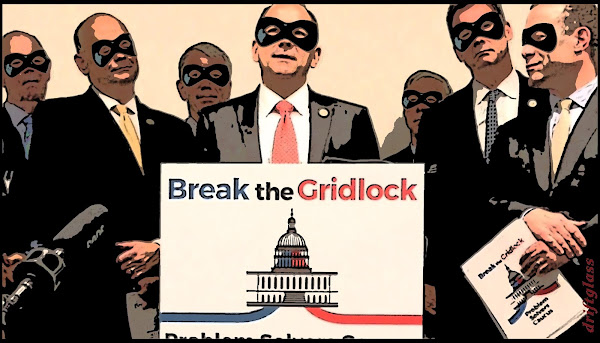 Narrator:  In a world where democracy hangs by a thread because of The Extremes on Both Sides, a small group of bland, ineffectual congress-critters unite to form a Mighty Team of Ineffectual Congress-Critters the world will come to know as The Centrists...

In this week's episode, The Dawn of Just Us, the Centrists leap into action -- Bam!  Pow!  Pundit! -- by explaining that the only way to save democracy is for Democrats to shut up and heed the inerrant wisdom of the same people who got run out of their own party because they refused to believe what had been happening right in front of them for decades.

Not All Heroes Wear Capes

In Fact, Some Heroes Really Don't Do Anything At All Except Get Credulous Pundits to Write About All the Heroic Shit They Might Do in Some Imaginary Future.

From my front porch ,

I see the great uncompromising extremes of both sides.

What is called the projected moderate extreme republicans that are hated by its own base and the Extreme extreme Fascists' Q popular side That cannot compromise with itself let alone anyone else.

The goddamn "moderates" are trying their asses off to stop the sane people from running the country.
Moderate my ass.

I was reading an article on Kos the other day. Why was I reading Kos? I had read all the good stuff already and was bored. At least it wasn't Slate. Anyway, the article was about the Texas abortion law. Except it wasn't. The Texas abortion law is with us because of the SCOTUS. I'm with you so far. And SCOTUS is the way it is because Hillary Clinton didn't get elected. Well, also the McConnell/Garland thing too, but OK. And do you know why Hillary Clinton didn't get elected? If you answered Russia or James Comey you get called a fool directly. If you answered NYT But Her Emails, yadda yes, but that's not the real problem. Jill Stein? I could tell her vote tally was bigger that TFG's victory margin in enough states that it would have changed the outcome as soon as 538 posted the counts. Jill Stein does not get a mention. So who is the real villain here? None other than Bernie Sanders, and his horrible, horrible followers, over whom he has robotic control. Can we be done with this? Ever?