Matthew Dowd and The Lincoln Lads: The Inevitable Team-Up No One Asked For

Since they were both in Republican politics in Texas back in the day, and since Matthew Dowd is on a his third or fourth  reputation rehab tour and a book tour and he is trying to spin up enough momentum for a run at either the office of Texas' Lieutenant-Governor's or a more permanent arrangement with MSNBC, it was inevitable that sooner or later Mr. Dowd would show up on Mr. Reed Galen's Lincoln Project podcast.

It was...empty political calories -- nostalgia for the Good Old Days of the Dubya Administration interwoven with the usual list of GOP horribles with which we are all familiar.  A sidebar about how corporations exploit workers that sounded like it had been lifted our of a Bernie Sanders stump speech. Allusions to book-burnings and Nazism.  A veritable Reader's Digest abridged edition of the Liberal Blogosphere from 2005, without, of course, mentioning that Liberals exist at all except to scold Democrats for being insufficiently savvy about how to talk to "the public" about Republicans.

However, at the very end, the saccharine shallowness of Mr. Dowd's pitch amused me.

The fuck it's not.

Dowd:  The battle is -- as you know, and you've talked about this -- is autocracy versus democracy.   And you're either on Team Democracy or on Team Autocracy or you're on

That's right.  But as you've both spent the past 30 minutes explaining, Republicans are the very gung-ho, bug-eyed Team Autocracy while Democrats on the barricades for Team Democracy so please explain how did this suddenly become not about Democrats and Republicans?

Dowd:  It's not about Red and Blue and Purple and all of that...

Except it manifestly is exactly about that.  Or as one disreputable Liberal once said on Twitter.

And then the funniest line of all.

Dowd:  I'm willing to listen to anybody on this as long as I know they're on Team Democracy.

Mr. Dowd is willing to listen to anyone who praises him effusively and to any Twitter bluecheck who agrees not to mention Mr. Dowd's deeply problematic past and the lengths he has gone to to cover it up.  But if you're not one of those... 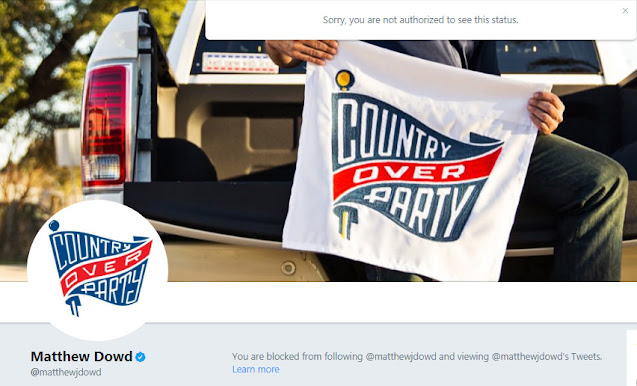 Would Dowd decide the opportunity with the wallet on his ass pocket or would he he discover his own self worth and find such an opportunity at FOX way to incompatible with his soul.

Others that do the FOXY Trot are finding ways to spend their earnings on ways to comfort and pamper their self loathing.
Benedict Arnold for one, had no qualms returning to England as a patriot living out his last days musing in false pride his deceit.

the towel should read money over party....

Historically there are three cases you see this sort of call for civility/ non-partisanship/ apolitical unity from the right:

They just curb stomped some major democratic function and wish to minimize the consequences of having commented the atrocity.

They have every intent of committing an atrocity and wish to lull people in to flat-footed complacency so they can magnify the effectiveness of their efforts.

They are weak/disorganized are seeking to buy time to reorganize and rearm.

There are exactly zero cases where they are genuinely concerned about anything but themselves. Conservative brains don't work that way. It is always part of the game for power and control.