UPDATED: Have You Noticed That Adam Kinzinger 2021 Sounds a Whole Lot Like Glenn Greenwald 2010? 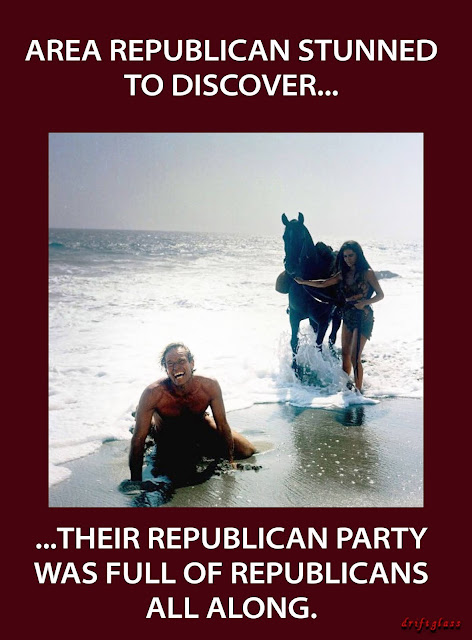 Here is Spleenwald in 2010 insisting that Democrats should be willing to lose a few elections and cede complete control of the government to the GOP for who-knows-how-long because that'll show 'em!

Well we kinda ran that experiment in 2016 didn't we?

Remember the endless think-pieces and screeds by prominent media figures about how it didn't matter whether Hillary Clinton or Donald Trump won because they were both equally terrible?  How the real enemy was the K'Rupt Duopoly?  How voters should never have to sully their Purity Skirts by ever voting for anyone who was not their first choice and perfectly aligned with them in every way?

Of course most of the prominent media persons who spent the 2016 campaign using their huge platforms to pitch the idea that voters should "send a message" by pissing away their franchise on Jill Stein or Evan McMullin or write-in Edmund Burke or just stay home have all, in various ways, conspired with each other and with the media corporations which own them to never mention it again.  Some, like David Brooks, get away with pretending it never happened because they never allow themselves to get caught in an unmediated venue where anyone might bring it up.  Whereas Matthew Dowd solved the problem of his toxic, craven past by nuking his entire Twitter archives and instantly blocking anyone who mentions it as he reinvents himself on camera as a Hero of the Resistance.

Anyway, we ran that experiment in 2016 and got Trump.  But pining for imaginary third parties where they would be celebrated as heroes and who sweep them to power has always been the go-to masturbatory fantasy of the deluded, the cowardly and the con man.

And with that in mind, here is Kinzinger today on The Bulwark podcast:

I think the problem is if you ever even talk about anything like a third party, what ends up happening is it gets right to the point of the election day and somebody looks and goes, "Golly I hate so-and-so so much that I'm not going to throw my vote away on a third party so I'm going to vote for the least of two deplorables."  And we are plugged into this matrix that says, "If you don't like Joe Biden then you've gotta like Donald Trump.  If you don't like Donald Trump then you like Joe Biden."  And there's a whole world outside the matrix of awesome possibilities that we have been told never existed.

This was after Kinzinger spent a goodly amount of time bitching that Democrats don't offer sufficiently delicious cookies and backrubs to dedicated wingnuts like Kinzinger who are no longer sufficiently wingnutty to remain in the GOP's good graces:

The Democrats are doing *nothing* to reach out and draw in those that have been disaffected by Republicanism.  I mean yesterday, for goodness sake, I *wanted* to vote for the this debt limit increase, but this ended up being... they ended up, like, pulling out a billion dollars for aid to Israel.  And I'll tell ya, the Progressive caucus doesn't give a crap about spending.  It's an Israel thing, so anyway...

And this was before Kinzinger spent a few more moments bitching that the Progressive caucus was exactly the same as the Freedom Caucus because Both Sides.

The Progressive caucus is the exactly same thing as the Freedom Caucus.  They're the same thing.

So a couple of things.

First, Israel hasn't been a ragged band of survivors hanging onto a sliver of land thanks to the protection of the U.S. military for a long, long time.  Israel is a very prosperous country whose own defense industry nets them billions of dollars a year, so they're not exactly crying poormouth.  And if they really, really need those missiles immediately, I'm sure they can scrape up the dough for it somewhere.

The defense industry of Israel is a strategically important sector and a large employer, as well as a major supplier of the Israel Defense Forces. Israel is one of the world's major exporters of military equipment, accounting for 10% of the world total in 2007.

Perhaps representative Kinzinger, who is very, very anti-choice, and very anti Socialized Medicine could persuade them to skimp a little on the free and legal abortion services which are covered under their national health care system and which our tax dollars underwrite?

Shhh! Don’t Tell Evangelical Supporters of Israel, but Abortion There Is Legal — and Often It’s Free

Neither religious conservatives nor liberal feminists are completely satisfied with the status quo in the Jewish state, but the current system allows some 40,000 women to have abortions annually.

...For an Israeli woman who wishes to end a pregnancy, the process is not only legal but is usually heavily subsidized or free, covered under Israel’s national health care system.

Second everyone involved in this fan-dance fucking well knows that Israel is going to get every dollar of that money down the road anyway.  From Bloomberg:

The $1 billion for the Israeli military will instead be included in a later bill funding the U.S. Defense Department that’s expected to get bipartisan support in the House and Senate

Republicans are lining up in opposition because of the debt ceiling provision, and House Speaker Nancy Pelosi can afford to lose no more than three Democrats if all GOP House members vote against the bill.

Rule Committee Chairman James McGovern said the progressive Democrats objected, arguing that there wasn’t an immediate need for the missiles. The Defense Department asked in a classified supplemental request for $1 billion to replace Iron Dome missiles used by Israel after rocket attacks by Hamas and Palestinian Islamic Jihad in May.

Although some progressives have been critical of U.S. policy toward Israel and Israel’s handling of the Palestinians, New York Representative Jamaal Bowman said the issue was that the provision was added at the last minute without a chance for discussion.

“It’s not about Israel, it’s about, once again, leadership, throwing something on our table last minute and expecting us to decide in five minutes what to do with it, that’s the bigger problem,” Bowman said.

UPDATE:  Well that didn't take long did it?

Finally, the real story here is the fallout from the lasting legacy of a party built on the politics of Newt Gingrich and the vocabulary of Rush Limbaugh.  A party where casually slagging the Left every single time they open their fucking mouths has been how Republicans punctuate sentences since before Adam Kinzinger's voice changed and he started getting hair in unusual places, and it's now so wired into their political DNA that they cannot function without it -- cannot address any Republican atrocity without greasing it up with some "But the Democrats..." Both Side Do It spin.

So when you add to that the enormous sense of entitlement these former- and near-former Republicans possess, you end up with someone like Kinzinger:  a man who believes that taking even half-a-step outside of his own, openly racist, fascist party is such an act of unparalleled heroism that my party -- the not racist, not fascist party -- really owes it to them to remake ourselves into an Eric Cantor/Paul Ryan/John Boehner party just to make them feel more comfortable.

And when we don't to that -- when we point out that we're already a tent so bag that it contains AOC and Joe Manchin -- they get really really pissed.

Mr. Kinzinger, your chair at MSNBC awaits you.

You hear a lot of criticism of identity politics, but identity and politics are not really separable. What we have here is politics of personality, which are far worse as they narrow the scope of one's choice to the single person whose name appears on the ballot, when the actuality is that the person on the ballot hires the people who actually run the government.
And perhaps Fergus is and was a clown, but he's a clown who hired:

Secretary of the Interior David Bernhardt

Director of the Office of Management and Budget Russ Vought

...and all of the odious and repugnant louts and grifters who preceded them, and non-cabinet level buggerers of the republic such as Steve Bannon and Stephen Miller.

If Israel is really in such urgent need of Iron Dome resources, perhaps they can consider trading a few of their nuclear weapons for them.

Fortunate for me, I have more alternatives in life than Spleen Wad espouses into he Vid Clip you provided.

There is suicide. Their is move to North Korea. or move to South America where Spleenwad resides last I knew.

There iare many more alternatives than Spleenwad offers as our choices he decided to lest and limit for us he perceives as mindless and not as the superior DNA as he and Khan.

You can eat stale bread. You can eat moldy bread. You can eat shit as long as he can convince enough people that Him Hones got a bad rap for his believer followers accepting the choice of gulping down a quenching mouth full of his Koo Aid.
The Three toed sloth pied piper strikes again.