Billy Long and the Overflowing Outhouse Next Door 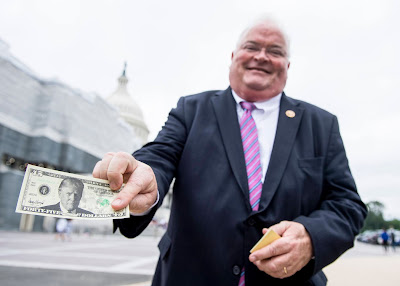 Yesterday, as I glanced lightening-quick over my shoulder at what was sort of horrors Fox News was up to, the first thought that flitted through my head was, "Wow.  So Legendary Pictures decided to add 'Baron Harkkonen's White Trash Third Cousin' to the extended Dune universe.  Well, they bought the rights so I guess they can do what they want..."

But I was wrong.  What I saw was not a trailer for the upcoming Dune movie with a non-canonical Baron Harkkonen's White Trash Third Cousin character tossed into the mix.

Instead what I saw was Congressman Billy Long from the Republican Gilead Hellstate next door announcing that he was gonna run for their soon-to-be-open Senate seat.

Now what you travelers from afar might not realize is that even though Missouri is adjacent to Illinois, it is a backwards, barbaric Red state whereas Illinois (thanks mostly to Chicago) is a civilized Blue state. And even though Missouri can brag about some outstanding exceptions like representative Cori Bush, it's largely the land of white power bro Joshua Hawley and governor Mike Parson, who bans abortion with one hand and pardons racist gun-waving snowflakes with the other.

However the field is already pretty crowded.  From Politico:

The 65-year-old Long, who is running to replace retiring GOP Sen. Roy Blunt, joins a Republican primary field that includes state Attorney General Eric Schmitt, attorney Mark McCloskey, Rep. Vicky Hartzler, and former Gov. Eric Greitens. Earlier Tuesday, Rep. Ann Wagner announced that she would not be joining the primary, instead running for reelection in her district. But with so many candidates already in the race, the competition for donors is on: Long is sending out invitations to next week’s fundraiser showcasing a host committee of nearly 100 major givers, including Bass Pro Shops executive Johnny Morris and trucking company owner Robert Low.

(Note to self:  Never shop at a Bass Pro Shop and never go to Robert Low for my refrigerated, flatbed, tanker, or intermodal carrier needs.)

So, with a field that jammed with Trump sycophants, Billy Long had really shine at the kind of handwaving and dog-whistling that Boss Trump likes.

Step One: Do not make your announcement in front of a tiny crowd of cheering constituents because who wants to see another mob of inbred, toothless, gas-sipping rubes on teevee?  Instead, beg or bribe your way onto Tucker Carlson's White Power Hour where you know Trump will see you.

Step Two: Unspool a string of toxic wingnut mad-libs that you know will make Tucker squee.

And in just over one minute, Billy Long rang all the bells.  Illegal immigration, Democrat conspiracies, masks, and defunding the police.  (h/t Crooks & Liars):

Yes, "they" (that's be you and me and our Commie overlords) are loading illegal immigrants onto domestic commercial flights with no ID or nothin' and shipping these possibly COVID-laden criminals to Lord know what cities all over the United State.  So while the Left is trying to force children to wear masks in schools, will they tell these possible human plague vectors to mask up before they are dumped willy-nilly who-knows-where?  Of course not!  Not even in New York City where people eat outdoors...where all the shooting happens...because of Defund the Police.

The judges had to take 3/5ths of a point off for not managing to cram Critical Race Theory, Hunter Biden's laptop and racist- flavor-of-the-week "Barack Obama's Uppity Negro Birthday Party" in there too, but there's only so much you can do with 60 seconds.  The main thing is, he delivered the crack that Fox zombies crave and stuck the landing, so I gotta believe he's in contention.

In the past week, 887 more people tested positive in Greene County, according to state data. Increasingly, hospitals are admitting children with the virus

Meanwhile, officials in St. Louis asked people who attended a Tuesday city council meeting to quarantine, including five council members, the county executive and director of the county health department.


Most of those at the meeting came to protest the joint city and county mask mandate and were not wearing face coverings. A city resident who attended the meeting began experiencing symptoms the following day and underwent a test for COVID-19 on Thursday, according Dr. Fredrick Echols, acting director of health for the city.


The city health department received notification of the positive result on Saturday, sparking the advisory asking that everyone who attended the meeting — even those who are fully vaccinated — to quarantine for the next nine days to complete the 14-day quarantine period.

-- continues to be the story of Billy Long's Missouri, today, on the other side of the Mississippi River where the Enlightenment still flourishes, governor J.B. Pritzker eliminated a deadly loophole in Illinois gun laws and is preparing to announce statewide school mask mandates and vaccine requirements for some state workers.

Wait for Robert Low and his Trucking company to begin attempting to pull their panties out of the ass as they bunch up.

Robert Low's company Insurance company is going to stress Robert out.
Although the governor will for the right price find governor powers to elevate Robert Low's company head aches of regulations to pamper his MAGA drivers.
There will be a wall they are going to demand be torn down. That would be the Federal laws regarding the industry safety. The State republicans are going to just hate to find out that interstate commerce and other laws are not completely under state pursue as a state right.

As For Robert Low who might look to firing his grumpy drivers and replacing them with Mexican immigrants who will wear the seat belt and drive speed limits without complaints of the freedoms being infringed and taken away.

His popularity with his employees may drop. But hey, The GOP state legislature will be able to take the election ballots if hey do not like the outcome and take they best bribe from the right candidate that will be the rightful winner.

And who knows, The Columbian drug cartels just may have a GOP dog in the race and they have lots of money to help fund the "right" candidate.

It is like the GOP hangs out in front of prisons awaiting the release of the most vile and violet criminals being release. To recruit as candidates to be GOP foot soldiers.

House Republican Steve Scalese made it to leadership. Because, "he is David Duke without the KKK baggage".
Republican back bencher Denny )Pedophile ) Hastert made it to Speaker of the House smack after impeaching Clinton over an affair.
But only after they outed most likely to be indicted newt Gingrich. Then almost making on his 3rd affair out of wedlock , Republican House member Livingston.
I seen Sarah Palin statement that she might run for U.S. senator from Alaska.
My question:
We all know Sarah Palin was extremely crazy ahead of her time as she wasn't fully acceptable (too flighty).

The stench, revulsion and inelegance of the "overflowing outhouse" doesn't seem to bother the conservatives who need to step over the bodies of COVID victims to gain access.