It's Brookses All The Way Down 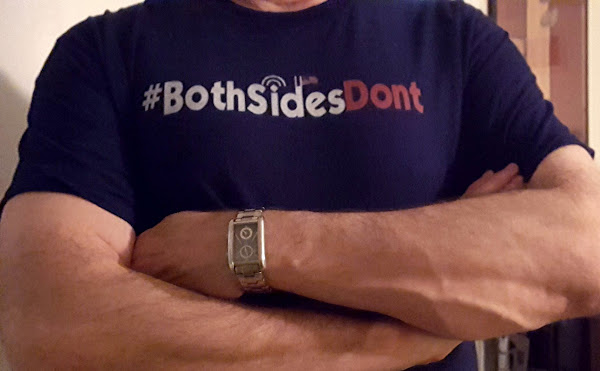 Longtime readers know that from time to time I take a look at what our local Republican rag, The State Journal-Register, is up to because it's such a reliable barometer of what sells down here in Trump country among the paper's largely octogenarian, Conservative subscribership.
You see, like most local newspapers, SJ-R is hanging on by a thread.  They've lost their competent editors, their professional photographers, their most knowledgeable and longest-serving reporters, their building and, when they sold out to GateHouse, whatever was left of their autonomy.  They're down to a handful of pages a day -- mostly sports, obits and ads -- so hanging onto those remaining octogenarian, Conservative subscribers is a matter of life-and-death for them.  Which is why it's  so very instructive to see what they leave in and what they leave out.
And today, for reasons that I will later reveal with a flourish, I'm going to first talk a little bit about paper's  rules regarding publishing the opinions of ordinary citizens versus publishing the opinions of Guest Columnists.  Ordinary citizens can write what they want (some stuff is "discouraged") under their real name and have a 250 word limit.  Guest columnists must submit "at least 350 words; 550-600 words max." and "should be about relevant and timely topics and should contribute to the local, state or national discourse".  Guest columns must also include a head-shot and a tag line.
But here is the crucial difference.   Ordinary citizens are limited to one submission every 30 days, with no guarantee that anything of theirs will ever be printed.  And I know for a fact that there are a group of dedicated local wingnuts who submit every month and then immediately start the 30-day countdown clock.  On the other hand, there is no limit to how often a guest columnist can be published, which brings us to SJ-R guest columnist Mr. Scott Reeder, who find his way into the pages of the SJ-R much more frequently than once every 30 days,  and whose tag line reads as follows:

Scott Reeder is a veteran statehouse journalist. He works as a freelance reporter in the Springfield area.

So just some guy, right?  Someone of no particular political or ideological credential, who reported from the statehouse for awhile and now puts his stuff around on a freelance basis.  And who, this week, used his easy access to the pages of the SJ-R to bring to its readers' attention the single gravest problem plaguing America politics today:  The Extremes on Both Sides!!

And I guarantee you that if you squint your eyes even slightly, you will not be able to distinguish between this column by Mr. Scott Reeder and every single fucking column Mr. David Brooks has written for The New York Times over the nearly 20 years he has been cranking out Both Siderist gruel for the Sulzberger family.

Break out your electron microscope and scan Mr. Reeder's words down to the quantum level and you will not find even a hint that Donald Trump was ever president or that just six months ago Republicans attempted to violently overthrow the  United State government, and came within a hair's breadth of succeeding.  You will find no mention of Newt Gingrich or Jerry Falwell or Fox News or Hate Radio or monsters like Ann Coulter who were (are still?) syndicated in the SJ-R, or Candace Owens who the county GOP paid to come here just last month to whip up rage and open up the wallets of local Republican bigots and imbeciles.

None of that history exists in Mr. Reeder's telling.

Instead he finds refuge in the same, shameful and grossly dishonest Both Siderist panic room that most mainstream media Conservatives hide out in these days, whether they're nationally-known hacks like Mr. David Brooks, or merely local embarrassments like Mr. Scott Reeder.  And so, in Mr. Reeder's telling, it's not a deranged GOP that's the problem.  It's all that darn complaining!

This is followed by a short and wildly inaccurate reimaging of why the Senate has become Mitch McConnell's killing room floor.  Because, ya stupid Libtard, it's supposed to be that way, so shaddap.

So, what complaint do we hear expressed continually on social media? That the Senate doesn’t equally represent the American people.

That’s certainly true. But, then again, it never was supposed to.

Then, with all the subtlety of a hyena in a hot tub, comes the inevitable, Brooksian razor in the apple:

Instead of griping about it, we need to ask: Why after 233 years is it an issue now?

The short answer is our political parties have failed us. Diversity of thought has evaporated from both the Republican and Democratic parties.

And just like *that* the entire modern history of the GOP -- from the rise of Nixon's Southern Strategy, to Reagan's racist invocation of Welfare Queens to Falwell and Gingrich and Hate Radio and Fox, to the eight year Republican obstructionist primal scream of Birtherism and Death Panels in reaction to Democrats nominating and electing exactly to sort of open-handed, compromise-prone Centrist that goofs like Mr. Reeder pretend to lionize -- all of it vanishes in a cloud of revisionist once-upon-a-times.

Once upon a time, the world’s greatest deliberative body was full of people like Romney and Manchin...

So instead of an honest accounting of where we are and how we got here, we are left with this:

We have a deadlocked Senate because some leaders in both parties have stopped trying to serve significant portions of the American people.

The problem isn’t how the Senate has been set up for the past 230 years: it’s political elites unwilling to listen to potential constituents whom they disagree with.

So how is it that "veteran statehouse journalist" has such garbage opinions and has been given a safe space at the city's only daily newspaper from whence to spread his garbage opinions?

Well, it turns out that ol' Scott isn't just any veteran statehouse journalist.  He's a veteran of the propaganda arm of the Illinois Policy Institute, your one-stop Illinois hellmouth for all things Wingnut/Libertarian.  The IPI is a model of how massively well-funded, interlocking Conservative groups operating at the state level manage to spend, bulldoze and otherwise worm their tentacles in everything -- 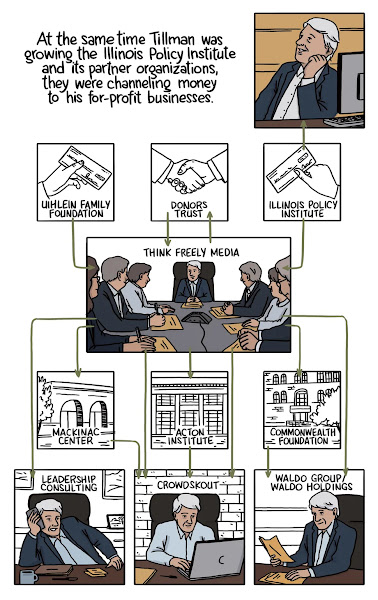 -- and Scott Reeder was the guy they hired to build the Illinois News Network and buy a radio network in order to create a reliable a feeder system for pumping Wingnut/Libertarian stories into local newspapers and websites.

Local newspapers and websites which, because they were slashing their own in-house talent at a breakneck pace to please shareholders and were therefor starved for content, were only too happy to take whatever professionally produced propaganda the Illinois News Network provided.

“We are thrilled to have Illinois Radio Network becoming a part of INN,” said John Tillman, CEO of the Illinois Policy Institute, in a news release. “Both organizations have a history of promoting transparency and accountability in government. And we look forward to continuing that fine tradition.”

IRN is being acquired from Saga Communications Inc., which will continue to own WTAX and other Capitol Radio Group stations in Springfield.

“The Illinois Policy Institute ... is a group that has a very definite ideological agenda, and I would be surprised if it did anything else other than to advance that agenda through its newly acquired operation,” Lawrence said.

And here is where spending hundreds of millions of dollars to build a network of interlocking wingnut think tanks, policy shops, lobbying outfits and media outlets pays off.   Because the Right is inherently racist, aggressively paranoid and ruinously destructive, over and over again professional, lifestyle Conservatives like Mr. Reeder find themselves faced with the problem of justifying remaining a professional, lifestyle Conservative in the face of overwhelming evidence that the Right is deranged, toxic monster with a knife pressed to the throat to our democracy -- a deranged, toxic monster which they spent years helping to create.

And since they are financially, psychologically and emotionally incapable admitting that all they have ever believed has been proven horribly wrong over and over and over again, thanks to that lavishly funded interlocking series of wingnut think tanks, policy shops, lobbying outfits and media outlets, they are all able to find refuge in the crumbling-but-still-formidable Temple of Both Sides Do It with all the other hacks.  Where, using all of their powers and all of their skills and their access to the media, they can wish, wish, wish away  indefensible pasts and drag the local, state and national political conversation away from the fact that the GOP is the problem and back to poisonous drivel like this:

The problem isn’t how the Senate has been set up for the past 230 years: it’s political elites unwilling to listen to potential constituents whom they disagree with.

You know they're BS'ing history as soon as they start talking about cloture as an inexorable reality of the US Senate and how it's "always been like this" and thus "cannot be changed"; because it hasn't always been like this. The filibuster was added to the Senate in the 19th century, and the current 60-vote cloture rules in the 1970's. And to act like it's always been used the way Mitch has used it since 2008 is historical revisionism on the level of Big Brother...

Hey, Mr. Scott Reeder, I have a question for you; do you find it embarrassing that a non-American like me knows more about your own political history than a supposed "expert" like you does? Oh, I forgot; your salary requires you to not know any of this.

I got some both sider for Mr. Reader right here.

The John Birch Society does crazy just like the Federalist Society.

The TEA party hates the same as the KKK.

Republicans are no different than Conservatives.

Libertarians expect the same things as the Superior race crowd.

QANON embrace lies and deceit just like the NAZIS.

The religious right are under the influence like the Kool aid drinking Jim Jones worshippers.

Then their is the once in a blood moon Joe Liebermann type who anally takes a LSD laced suppository that busts up the constipation that when it bursts out. It leaves am incontrollable stinking mess. That both sides has to clean up.

One party uses its majority power in their supposedly small government to make big government big enough to stop people from voting.

The other side uses their majority power as government to ensure you right to vote, no matter how big or small government may be..