Kevin McCarthy to Tom Nichols: I've Got Your Back Bro! 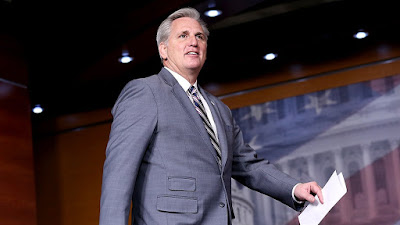 How exciting it must be for Tom Nichols, whose media credentials are much more impressive than yours or mine -- Professor, author of "Our Own Worst Enemy." Curmudgeon. Cat guy. Democracy enthusiast. Board of Contributors, @USAToday, Contributing Writer, @TheAtlantic -- to greet the morning by discovering that his newest ideological BFF is none other than House Minority Leader and Stupidest Man in Congress, Kevin McCarthy.
Here is McCarthy today, taking a break from eating paste and ranting about commies to explain that the real culprits behind the 01/06/21 insurrection are a large, amorphous group called "everybody across this country".  From HuffPo:

‘Everybody Across This Country’ Is To Blame For Capitol Attack Donald Trump is responsible for the Jan. 6 riot, but so are you, according to the House Republican leader.

And here is Famous Teevee Never Trumper Tom Nichols just yesterday, explaining that the real culprits behind the 01/06/21 insurrection are a large, amorphous group called "America" --

It should not, of course, have been a shock that America under Trump became a collection of overgrown adolescents who were incapable of facing adversity. When the time came for genuine seriousness—literally, a matter of life and death—America was a nation of spoiled children, sullen when corrected, explosive with rage when forced to do anything they found unpleasant, ready to lecture others on why the Constitution gave them the right to wear a surgical mask on their chin.

For now, I'll just meditate on what comfort it must bring to Very Loudly Self-Proclaimed Intellectual Giant Tom Nichols to know that a fellow Conservative brain wizard like Kevin McCarthy has his ideological back.

You mean the same Tom Nichols who on Morning Joe praised what conservative had accomplished since Reaganbut when I listed the disasters Conservatives had committed since Reagan immediately blocked me on Twitter? That guy.

he has a point...47% of of is a lot and it would difficult to put them all in jail so lets get evidence (photos are nice...) and just put every stupid chucklefuck that stormed the capitol and all those that incited them and planned this in jail with them...

so yeah..the point is he's half right!

1st
Someone best inform Kevin, Me and the rest of America have actual alibis for the Day of the insurrection.
2nd
I am not a public figure and do not take kindly to his accusation and demand a public apology. , My lawyer told me to say that.
3rd
People like me have tried and tried to provide the mental heath to the GOP base. But mental walls made of steel bricks is too tough to penetrate. It takes Rush approx. 30 years of nation wide radio gilling vulnerable minds that are void for him to fill with all that right wing mush. Plugged their ears and now cannot hear any sound except the tonal pitches of Trigger words provided 34/ 7.
4th
The entire GOP tells us all the time that Nancy Pelosi is a California liberal who wants to impose all her California things on you. Things you are told you are not allowed to like.
While Kevin McCarthy is a California liberal who wants to force his California things on yu and you are told you like them even if you don't.

One thing for sure is, the right wingers sure do not like calif.

If we put them in jail tax payer would be forced to fund their stay and that is socialism that would be insulting along with imprisonment.

How about deporting them from where they came? The countries the refuse their returns we can fly by parachute into Iran naked with swastikas' tattooed on the forehead. (many already have). and some sort of Muslim slur tattooed on their back

I cannot argue against Kevin being exceptionally stupid, But is he really the stupidest?

Have you not bothered looking at the other republican candidates for that esteemed glory you doth upon the Kevin?
We know because we been told by Donald Trump that he, "is the smartest republican ever to trod the Earth (solar system) in history. You telling me he didn't even get considered?
Apparently, you never have had your, "asparagus insulted" like a Gohmert?

Hillary is going to piss and shot on Rash Lamebrain's grave.

BTW, it is dearly entertaining to listen to Ol' Half-a-brain in his final days, when they wire him up to appear. His baritone is falsetto squeak and unfixable in audio post.
His grandiose story buildups are shortened to two wheezy statements before he leaps to defensive invective such as "libs are communists, in thrall of Kommie Harris and I am not a racist."

Im just waiting for The Congress and the President to make good on those 1400 dollar checks.

“Never be deceived that the rich will permit you to vote away their wealth.” -Lucy Parsons

That sums up the last century or so...

McCarthy also noted "Who killed the Kennedys? After all, it as you and me.", while other caucus members added "hoooo hoooo".

Hey DG, what happened to your Twitter account? I went to message you just now & it says your account is suspended, what gives? Do you have a back-up/burner account?
DM me, this is The Pie Master.