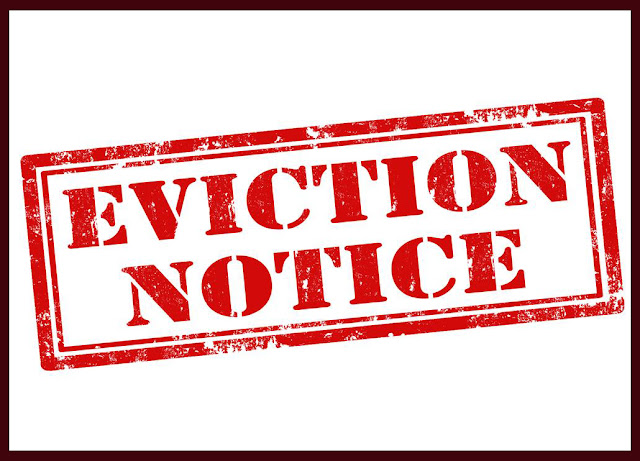 This time I'm kicked out completely and forever.  Just like Donald Trump!

So did I incite a bloody insurrection against the United States government?

Did I threaten anyone or wish them physical harm in any way?

I have been evicted from Twitter and told never to return for responding to this, which was directed at me...

With this, which is objectively true... 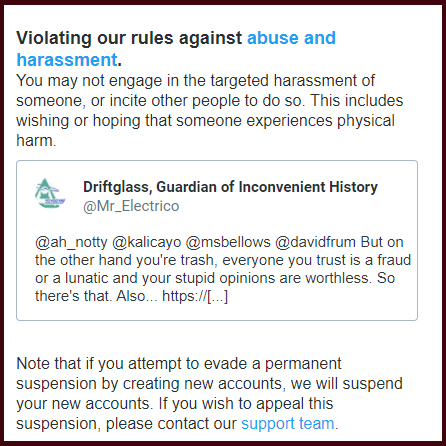 A little spicy, sure, but nothing compared to what you can see flying back and forth on Twitter all day, every day, with no scoldings or groundings or exiles from @Jack.

Did you work hard to be this much of a moron, or are you the product of a combination of enthusiastic inbreeding and a mother who spent her pregnancy huffing paint thinner while servicing her other clients in a truckstop bathroom? https://t.co/sVUubocn9m

Because this is obviously not a permanent account suspension offence.  Hell, it's not even worth a 12-hour-bit-in-Twitter-minimum-security-jail.

And just for kicks, some of you may remember that I did a week in Twitter jail a few years ago for using a famous quote from Pulp Fiction -- "Send in the Gimp" -- to describe Senator Lindsey Graham's relationship with Donald Trump. If you'd like to see an excellent example of what "selective enforcement" means, click on this Twitter search link to get a feel for how many other people have done/are doing exactly the same thing and are not being chucked into Twitmo.

And those of you with long memories ma recall that I did my first week in the digital gray-bar hotel for calling to a specific celebrity, Bill Maher, as a "whore".   But boy was it worth it!  Because thanks to Twitter making an example of me, Bill Maher is now very nearly 100% safe from anyone referring to him or to anyone else by that word on that website.

I filed an appeal, which I expect to fail, so so-long on Twitter, kids, and thanks for all the follows and follies over the years.

The algos are out of control!

A friend of mine appealed and won. @chipgoines Sorry you got nailed. I can't believe what you said is a violation. I just don't see it.

I'm sorry. This is so utterly random and disparate.

So the original comment is fine...but yours is not...because of threats of physical violence...that you didn't make?

Or is this because you decided to toss in David Frum, who has a blue check?

No worries. Let anyone of us know and we'll create a 2nd account and let you set the PW. That would at least have a "monitor and inspect" aspect to it. Gettin' ready for the MAGAts to screech, "Well, how do YOU like it?!"

I have noted that the Conservative monitors on Facebook and Twitter have a tendency to "even the score" anytime a prominent critic from the Right suffers a ban.

This is ridiculous; I've reported real Nazis for real Naziism and all they get is a vigorous finger-wag and maybe a good night's sleep in the pokey.

I got 10 days in twitter jail for calling Joel Osteen a money grubbing whore. Their rules are truly arcane and selective.

This makes me feel sick. I despair of the twitter stupid. "Injustice" is too weak a word for your ban. It's mean, petty, vindictive.

Seriously, what the fuck? Oh man...well, not the best way to start off my day, but hope your appeal goes through, DG.

Funny how when liberals can't get our voices published, we're a bit annoyed and get over it but when conservatives get the same treatment they get hysterical and start screaming about 1984 and commmunism. Spoiled children.

You and Trump are guilty of the same crime. You were a threat to blue check egos.

Twitter rules exist to protect the egos of the blue checks and nothing else. They think it is the blue checks that bring eye balls to the site for the purpose of monetization. The rules do not exist to promote free speech or a liberal agenda or anything else people insist they promote.

They exist to protect the delicate fweelwings of blue checks.

Why can't you simply use the GOP white supremacist religious superiority and patriotism excuse?

You know, the excuse that every radical right wing that invaded and vandalized and harmed people at the capital use.

I am not the patriot you are looking for.

Twitter is a private company and as such is free to do pretty much as it pleases. On the other hand, we should get it through our heads that the "rules" is asks its users to abide by are pretty much bunkum.

I referred to a politician as 'white trash' on Twitter and they banned me immediately (24 hours). I think 'trash' is their both-sides for the N-word.

As ever, the Wilhoit Principle applies:

did you mean: the Wilhoit Proviso

Take your talents to MeWe. We need more rational people over there.

Hmmm... Makes me winder if all the trash synonyms (garbage, sewage, effluent, waste, etc) would also trip the blues check protection algos? Maybe its time to find out...
RetiredPatriot

To keep the republican Q TEA potters happy, you both sides the shit out of it by booting both sides . They are going to have to prove that they are not just booting the right wing violent vulgarity. If there are Congressional hearing, they will need the DG's they booted to prove they weren't picking on the sad victimhood of the right.
You remember, like the false IRS attacks on violent white supremacist groups not qualified for their 501c tax exemption.

You have my sympathy, but honestly I won't miss you there. I dropped out of twitter after about a two day trial period-way too much noise to signal for my tired old brain. Why, I'm so old I talk about "articles" that I read on the InterWebs. Meanwhile, I will continue to visit this site on a daily basis for your commentary and your excellent collection of links. As for twitter, it can eat shit and die-I wouldn't miss it. Stay cool, my brother and thanx for all you do~~~

I am sure there is a a Twit reporting agency to turn in the Ann Franks that tell people about NAZIS.
Tat elite reporting site of Twitter for the privileged as David Frim to a congressman.
You can't have folks twittering around out there fondling the good name of folks like Ted Cruz.

But then Carlos Danger was never given the Boot until his was arrested.

Wow. What a delicate snowflake, if THAT'S all it took for her to go sobbing to the cops to say you were "attacking" her.

DM me so I can follow your backup... I guess FORMER backup acct...

Wear this banishment as a point of pride. Jack's libertarian house of shit stinks up the place anyway.

Absolutely. My 19-year-old Asipe son loves to show me memes I almost never get. Likewise Twitter, the noise, from my POV, seems to utterlu overwhelm the signal. I have never understood how to glean the wheat from the chaff.

You knew testing the edges of the envelope could lead to a break through.

Of interest to nobody I just discovered that I was banned from Twitter. I built a little page and never linked it to anyone and I am sure nobody ever saw it. Why did I do this? Got me. Anyway in a series of senior moments and some oddities with Twitter accounts being email or phone number based I lost access to it in April. That was right after a tear about the normalization of fascism over the last 95 years lead by the NY Times. So anyway while waiting on a car repair I fiddled around and got logged in and I discovered I was banned. Why I can't discern. I am certain it is because I was calling people and orgs fascist.

Here is the grim conclusion. Calling people fascist gets one banned. Calling someone an anti fascist is perfectly OK. IF anyone would like to experiment with this and see if you can get banned for saying the NT Times normalizes fascism I would love to know the result.

When you win power the 1st step is to seize communication and media, otherwise the enemy dead enders still in place sabotage the work. Facebook and Twitter should be nationalized and reformed with democratic rules (as in democracy vs autocracy). Our authorities should not force US citizens to use a corrupt, unaccountable private firm hiding behind algorithms in order to communicate with our government. I've never used FB or Twitter and neither should our government. Or you. (Not you personally, obviously being ban hammered for now). If I need to join either one to be relevant then fuck relevancy. FB and Twitter are fucking evil and need to be as dead and remain as dead as Generalissimo Franco and Sheldon Adelson. Boycott.

Same thing happened to me. I amplified a Brian Beutler tweet, where he pointed out Republican hypocrisy by just "moving on" after the Capitol insurrection. I used the unfortunate term "Kill you worse," which makes absolutely zero sense, but Twitter deemed it Stalinesque, apparently. Been three weeks tomorrow, no response to my appeal. Sayonara, Twitte?

Can't say I feel your Twitter banishing pain. I don't Twit you see.


BI will say some of your examples of other like Rick Wilson makes a case if he is still on why not you or Ban him too.

I will say that if they have to ban you to ban The Donald/ Sorry Bro I am with Twitter High command on this.