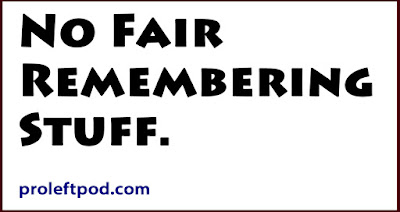 As readers of this weblog know, the whole Both Siderist worldview is driven by the myth of equal/reciprocal/reinforcing/accelerating intolerance from both sides of the political spectrum, which acts like some kind of a Newtonian law of political action/reaction: each side becoming more extreme in response to the other side's previous increased extremity.

And the entire thesis of David French's book is that the centripetal force from The Extremes on Both Sides acting on each other has made it impossible for the country's central government to function any longer. No choice left but to break apart, either in fact or in practice.

To refresh your memory, it was a successful, scandal-free Democratic administration which historians will find sandwiched in between the two worst, most disastrously failed presidencies in American history.  Twin pillars of early 21st century failure which were both brought to you courtesy of the Republican Party.
One of them, the Bush administration, lied us into the wrong war, fucked that war up, spent us broke, invented sweeping unitary executive powers, illegally wiretapped millions of American citizens, set up a torture regime and presided over the collapse of the global economy.
And the next Republican administration, the Trump administration, has been worse.
So far, the Trump administration has lied about everything, doubled the deficit, sold the country out to  foreign adversaries, fucked up the response to a pandemic so comprehensively that it has killed over 200,000 Americans and collapsed the global economy, and is making open war on the press, the constitution, his political enemies and, generally, the entire country.
So for Mr. French's theory of accelerating/oscillating Extremes on Both Sides politics to prove out, Democratic presidents who governed prior to each of these Republican catastrophes must have been so proto-Bolshevik that Extreme that the Right felt justified in swinging the pendulum so far back that it touched Mussolini's chin.
But of course that wasn't even remotely the case.
Instead, as I wrote of Bill Clinton more than a decade ago ("Like a Virgin"):

Once upon a time, there was a President named Bill Clinton, who was, by most historical standards, a typical Centrist Republican, although by a fluke of geography and circumstances he ran for public office with a "(D)" after his name.
Under his Administration, many Conservative ideas which had long gathered dust on the shelf -- ideas such as welfare reform, a balanced budget, debt reduction, a strict “Pay as You Go” fiscal regime, jobs-jobs-jobs, budget surpluses, NAFTA, GATT, official bans on gay marriage, etc. -- were finally realized.
And for all of his good work on behalf of their ideology, Conservatives spent eight, long years treating Bill Clinton -- a Southern, White, Christian man -- as if he were a case of flesh eating nuclear syphilis.
Because he did not run for office with an "(R)" after his name.
And because he did not run for office with an "(R)" after his name, according to the leading voices in the Republican Party and the Conservative Movement, Bill Clinton was, in no particular order, Hitler, a Socialist, a rapist, a warmonger, a serial murderer, and a drug dealer, whose Presidency was somehow vaguely illegitimate...

The Republican base only came to believe that Clinton was History's Greatest Monster because the Republican Hate Machine spend eight years continuously cranking out an unending stream of wild, hair-on-fire propaganda, culminating in four years of Republican congressional witch hunts and impeachment.
And Barack Obama?
Barack Obama was a perfect, eight year experiment in giving the Centrists and Both Siderists  exactly what they said they wanted.  What they said "the American people" were crying out for.  A Democrat who was ideologically an Eisenhower Republican and who was built from the ground up to be a compromise machine.   A Democrat who the nation hired to help  repair all that the Bush administration had wrecked.
A Democrat who was treated like this by the Republican Hate Machine from Day One:
A Democrat who nonetheless patiently offered Republicans the hand of comity and accommodation over and over again only to pull back a charred stump every single time.
And for all of Obama's truly superhuman efforts to find some way to bring Republicans to the table to collaborate on healing our nation's deepest wounds and solving our deepest problems, what we got in return was eight years of Republican sabotage, sedition, unhinged racism, Birtherism and, finally, Trump.
So I guess this is my way of telling David French to take his Conservative Concern trolling --

David French warns of the potential dangers to the country―and the world―if we don’t summon the courage to reconcile our political differences.
Two decades into the 21st Century, the U.S. is less united than at any time in our history since the Civil War. We are more diverse in our beliefs and culture than ever before. But red and blue states, secular and religious groups, liberal and conservative idealists, and Republican and Democratic representatives all have one thing in common: each believes their distinct cultures and liberties are being threatened by an escalating violent opposition. This polarized tribalism, espoused by the loudest, angriest fringe extremists on both the left and the right, dismisses dialogue as appeasement; if left unchecked, it could very well lead to secession...

-- fold it until it's all pointy, and shove it were the sun don't shine.

And that goes double for anyone who interviews this goof about his book but conspicuously fails to mention the preceding decades of American political history which negate every word of what French is selling.

To this day my Rightwing friends on Facebook insist that Obama was a racist tyrant. Notably, they don't even attempt to back up their screeching with anything resembling a reason, not even outright lies like they currently use to justify the actions of Donald Trump.

As Trump's nominee for SCOTUS, Amy Barrett was outspoken to not fill Scalia's seat or what is called replacing a vacancy. With Obama's nominee Judge Garland.

Using her fantastic conservative judicial logic that she treated America to from a lower court judge who couldn't resist temptation to barge in where she did not belong.
By there own tangent in 2016 over Scalia not to be replaced by Obama, she should not accept the nomination to replace RBG by Trump and imbalance the court.

The one thing Catholicism offers is the ability to confess and ease a conscience (if in possession of one) so you may continue to behave poorly confession after confession.

For those with no conscience, it is called going through the motions.