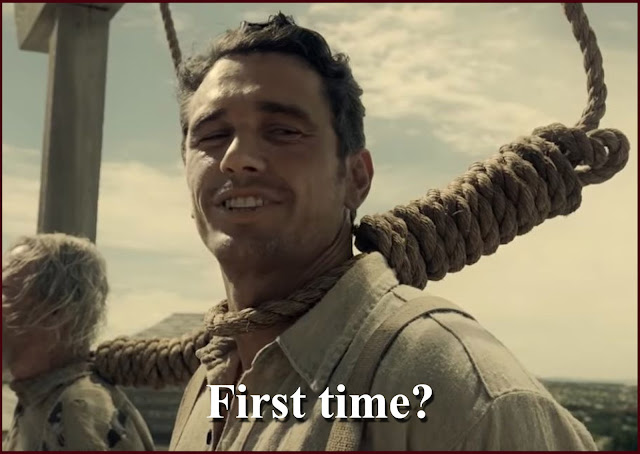 So here we are, once again together on yet another windy gibbet of incompetence, treachery, stupidity and racism where 40 years of Republicanism has marched us.  And so, at this somber time, let me tell you about the funniest damn thing I have heard in weeks.

The Bulwark COVID-19 Megacast.  Not sure why it qualifies as a Megacast, since it's just a Bulwark executive editor, a couple of Bulwark senior editors and Republican "communications consultant" rambling for 45 minutes and not, y'know, doctors or public health experts. But then I'm just a shitty Liberal blogger out here in the middle of Middle America and as such untutored in the business of Big Time Conservative podcasting.

However that's not the joke.  And to get the joke, you have to know just a little bit about how The Bulwark came to be.

The Bulwark is a website/podcast started by a couple of life-long toxic Republican hacks -- Iraq War pimp Bill Kristol and "The Rush Limbaugh of Wisconsin" Charlie Sykes -- after the rise of Donald Trump sank Kristol's Weekly Standard.

For more than two decades, The Weekly Standard was the house organ of neoconservatism. William Kristol, one of the magazine’s co-founders and the walking embodiment of its politics, was a leading champion of the Iraq War and of Sarah Palin’s rise in national politics. In the pre-Trump era, especially during the George W. Bush years, he was a conservative celebrity in Washington and a fixture on Fox News.  But Kristol recoiled from the ugliness and political contradictions of Trumpism, and his magazine followed his lead. In the summer of 2016, the day after the Republican National Convention wrapped up, Stephen Hayes, Kristol’s successor as the magazine’s editor-in-chief, published an article titled “Donald Trump Is Crazy, and So Is the GOP for Embracing Him.” On Friday, The Weekly Standard’s corporate owner, Clarity Media Group, decided to shut the whole thing down. The magazine’s employees were told to clear out their desks by the end of the day.

The Bulwark was created as a flimsy lifeboat that unrepentant and unreconstructed Bush Regime dead-enders and anti-Obama obstructionists cobbled together out of the flotsam and mailing lists of The Weekly Standard.  But The Bulwark stays afloat for one very simple reason.

There is a Club.

A media insider Club.  And they are in it and we are not.

You see, it's not enough that the Beltway media decided decades ago that they would categorically refuse to hold Conservatives accountable for any of the heinous shit they say or do (See "The Gingrich Rules") because that only gets The Bulwark halfway home.  No, the real benefit of Beltway media insiderhood is that that the Beltway media now actively and aggressively promotes The Bulwark, which is why any given day at any given time you are more likely than not to see Bill Kristol or Charlie Sykes or Amanda Carpenter (former senior staffer to Senators Jim DeMint and Ted Cruz and Washington Times columnist) gassing away on MSNBC or CNN or in the pages of The New York Times and The Washington Post.

And that is why The Bulwark Megacast cracked me right the hell up, starting at around the 2:37 mark (rush transcript, so all spelling errors and misattributions are mine and emphasis added by me):

Speaker One (Jonathan V. Last ?):  ... I can't believe it.  Larry Kudlow giving financial advice to people that didn't work out.  You know, this is the thing that drives me most nuts about all of this.  Is that there are a bunch of people who behaved terribly irresponsibly, one of whom is Larry Kudlow...uh...you would see lots of others on the Twitters and Jim and Tim both collected a bunch of them.  There won't be any price to be paid for that!  I think.  When this is all over nobody will ever go back and say 'Hey, you know what?  Sheriff David Clarke was telling people to go out in the streets and go to dinner, y'know, screw the Libs and own the Libs by congregating in big crowds and ... uh...  it's well whatever."  But, uh, drives me crazy.

Speaker Two:  So boys, what do we think of the...the...big Fed stuff.  Big Fed news from last night?

Speaker Three (Tim Miller?):  Just really quickly before the Fed news, it is worth, while we're "Nobody's gonna hold anybody accountable", we might as well do it here on The Bulwark podcast.  And this just proves your exact point, JVL, that for...for...for...maybe the younger listeners Kudlow did this same exact thing in the 2008 economic ... uh ... uh ... collapse when Bush was president.  I mean he was just a CNBC talking-head at that point.  But ... uh ... he was, again, telling everybody to calm (?), telling everybody that the stock market was gonna hit 40,000.  So, y'know, this is ... then 10 years later he gets named chief economic adviser to the president of the United States so if that doesn't underscore your point about how nobody's gonna held responsible or have any repercussions for this...I mean that...Kudlow is like example 1, 2 and 3.  And, y'know, that's why, y'know, I'm going to yoga a lot more out here and just trying to, like, deep breathe, breathe deeply and understand that nobody will be held accountable for their actions.

Speaker Two:  "35,000".  And I believe it's Jim Glassman and Kevin Hassett who wrote this, in one of the most spectacularly wrong books ever by two supposedly serious economists.  And, uh, their penalty for having written one of the wrongest books written in, like, the last 50 years was to go on to populate the highest reaches of Republican presidential administrations.

So Bill Kristol and Charlie Sykes' wingnut welfare project is now going to be God's own Hammer of Righteous Judgement, because "nobody will be held accountable for their actions."

That is what makes it art.

And that is why I fear that if start laughing now, I may never stop.

Unbelievable?
No.
Entirely Predictable?
You bet.

Like Dada, mixed with Surrealism, and a healthy dollop of 5 a year-old's mixing of finger-paints and snot.

It is like using the dumpster fire as a BBQ.