They Shoulda Stopped the GOP at Munich 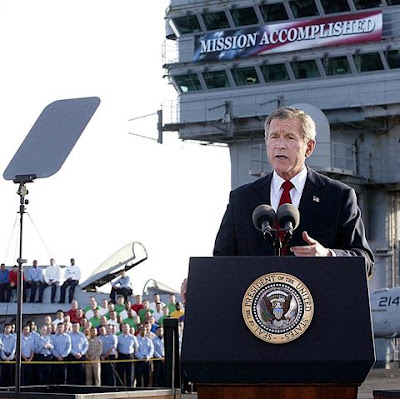 They should never have let them get away with that.
They were just askin' for trouble.


For those of you who are new here, welcome to the bigger, dumber reboot of 2003.

Once again, a Republican president is lying us into the wrong war: While reliable Republican mouthpieces go on Fox News to support those lies:


And what would a Big War Crime Party be without a Cheney cheering it on?

I could go on, but this is sufficient to make my point -- that Right freely spends whatever is required over however many decades are required to maintain a vast and well-funded wingnut welfare infrastructure to insure that its myrmidons are tuned up and ready to roll when their services are required.  And they spend whatever is required to nurture and grow the next generation of reliable wingnut lunatics as the previous generation dies off or retires.

As for the Left?  Well, if you're new here, these might not mean a thing to you, but to olds like me, they mean a great deal.

Within the blogosphere there is no more Riverbend.  And Tbogg -- who was a somewhat popular blogger -- has found other things to do.

There is no more Fire or Dog or Lake.

Steve Gilliard left this vale of tears long ago, as did Skippy the Bush Kangaroo.  Miss them both every day.

The Gropinator has ceased to be.

The Whiskey Bar has long since closed.

The brave and redoubtable Shakes.

During the Age of Bush, James Wolcott used to handle a bloggy light sabre like a young Kit Fisto, but he has largely retired from the field.

Matt Taibbi has learned that Both Siderism is a much steadier gig.

That Unclaimed Territory guy is now one of Tucker Carlson's sidekicks on Fox News.

DC Media Girl was gone for a long time -- the name has come back but not the fire.

Despite heavy promotion and a deep bench of contributors, The Group News Blog -- which hyped itself as carrying on the work of Steve Gilliard -- never achieved sustained flight.

The Dependable Renegade has moved on.

The Liberal blogosphere during the Age of Bush was a volunteer, DIY affair pulled together by people who might have otherwise had little in common, but were all horrified to learn just how comprehensively the mainstream media had failed us, and how determined the media was to stay broken.

For the most part, we were all on our way to other places and this online blogging thing was supposed to be a temporary exigency -- a last-ditch, passengers-storm-the-cockpit measure to slow down a massively bankrolled Republican party as they relentlessly bulldozed our democracy towards the ash heap of history, using the well-paved frontage road which the Beltway media had built for them to do it.


-- but the cavalry never came.

Instead, while we held on as best we could and our ranks thinned waiting for reinforcements, the GOP only got crazier and more dangerous.

Instead, America's first line of defense against fascism -- our free press -- only got weaker and more  pusillanimous.

Because it turned out there were no reinforcements.  There is no cavalry.  There is just us.

And while there are plenty of wealthy Liberals in the world, it seems there are none with the will and focus to invest what is required over however many decades are required to build a real Liberal media infrastructure so that creaky old bloggers don't have to cobble one together out of spare parts every time the GOP blows up another pillar of democracy.

...Shakesville, too. The madness of this mal-administration was ruining her health. ~:(

And too many people on the left now think outlets like Vox, Axios, etc., are the liberal antidote to the RW propaganda catapult when they are not.

Maybe the kids of today can help us old libtards?

I'm 62, with a bed ticker and bad lungs, so my organizing, marching, shouting, and door-knocking* days are over.
Time for those under 40-50 to take their turn at the batting cage.

*I can still dial, so I`ll at least be doing that later this year.

face it, Flounder. you fucked up. y'all played the double secret reverse "both sides" game, too cool to really support Barack. now you have have no one. sad