Because It Can't Be Reduced to a Stupid, Golf-Cap-Sized Slogan... 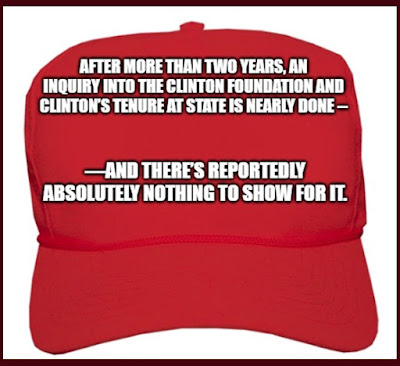 And even if you were to carry a dead-tree copy of it rolled up in your back pocket and smack him upside the head with it every time he launches into another rustic extemporization about Crooked Hillary, you know all he's gonna do is scream "Fake News" and scamper back to his spider-hole until Sean Hannity tells him what to think and sends him back out into the world.

Still, in aid of understanding just how comprehensively broken our political system is, you should probably read it:


SURPRISE, SURPRISE: THE DOJ’S HILLARY CLINTON INVESTIGATION HAS BEEN A BUST

After more than two years, an inquiry into the Clinton Foundation and Clinton’s tenure at State is  nearly done—and there’s reportedly absolutely nothing to show for it.

...
Despite Republicans' long insistence on Clinton's wrongdoing—and Trump's favorite “lock her up” rallying cry—the fact that the Huber investigation has reportedly been a bust doesn't seem to come as much surprise to those inside the Justice Department itself. Senior Justice officials cited by the Post said that the investigation had largely been viewed as little more than a way to appease Trump and his Republican allies, and officials expected the inquiry was “unlikely to lead to anything of significance.” “We didn’t expect much of it, and neither did [Huber],” one source told the Post. “And as time went on, a lot of people just forgot about it.”

...
Of course, Clinton being cleared of wrongdoing by Trump's own executive branch isn't about to stop the president from bashing Hillary nonetheless. (Never mind the fact that six of Trump's own associates have been convicted of crimes, or that private email use has reportedly been rampant throughout the Trump administration.) Less than an hour after the Post report came out, Trump was back on the campaign trail attacking Hillary, repeating his favorite 2016 talking points to a crowd of supporters—Clinton's innocence be damned. “Crooked Hillary—you should lock her up, I'll tell you,” Trump told supporters.


Now take a moment to consider just how many billions of dollars and decades of cultivated rage, ignorance and bigotry the Right has expended to make themselves this completely invulnerable to reason.

...Who could have known that Ohio Art would be the downfall of America?

And our network 24/7 news channels briefly report ,
"how the outcome of finding nothing by using Trump;s government to investigate his political enemies (just like Putin and on the trustworthy advice from Putin to do it).

The media talks about how unfair it is to Trump to have such bad luck and how the unspecified Deep State is doing bad deeds to the greatest and smartest republican ever in history.
News corporations are people. The 5 GOP SCOTUS said so. As people, they need to be held accountable. News companies are not the same as Tabloid. Or so it is said./

The NYT for all its printing of this made up slander and innuendo they spent so much time trying to legitimize. The showed they weren't partisan in the presidential race by being partisan on the conservative side.
It will not get enough reporting clearing her because now, she is not news to them.

The NYT should now run series and series of articles of how Trump blathered out baseless accusations and force government under his presidency to witch hunt HRC while he uses his power to obstruct any inquiry of his own corrupt illegal actions.

But that is me and the NYT has readers to tend to.

The outcome of this genuine witch hunt seemed obvious to me and reflects my beliefs about Hillary and her relationship with the ratfuckers on the right. First and foremost being a woman she's a massive target. Having the audacity to actually lead and be a woman is sin #1 for those assholes. Not that they'd admit it. They probably hate her because of an unconscious reaction to their shit stilted world views. Nevertheless, she became a major source of fund raising and lie generation to smear her, the democrats and the left in general. During the 2016 election I couldn't believe how much hatred and venom was directed at her, nearly none of it based on actual evidence. Ironically, the hatred from the left had much more credence than from the right as it was clear she bullied the DNC into making her the nominee at the expense of fair play for Bernie. Unfortunately, she now had vented spleen from both sides of the aisle and the post 2016 election fall out felt like a near universal disgust for Hillary on a level that seemed completely disproportionate to the so called crimes she committed. I don't support her politics. She is a centrist neoliberal hawk politician. She's a product of the politics of her time when the left had nothing to offer Americans but to compromise and move rightward as the Republicans ran away with their fevered Reagan dreams that dominated the country at that time. The political trends would probably have kept Democrats out of high office for some time had they not adopted some Republican ideas. Again, I'm not agreeing with it, it's just the way the winds were blowing in the late 80's and 90's.

In the end her losing the election in 2016 might be the best thing to rehabilitate her to be seen as an actual human being after the endless barrage of horseshit thrown at her for 35 years. The Howard Stern interviews with her showed quite a lot of her humanity with nothing more than having her answer questions with comfort and confidence.

I don't think Hillary's politics will be remembered fondly but I do think history will be much kinder to her. She was the first high profile female politician to have such a large influence on the country and for that she was a lightning rod. She was probably corrupt in the very conventional ways most politicians are corrupt but there isn't much evidence for anything serious beyond the use of a personal email server for government business (but let's not forget Colin Powell, Condi Rice, Jared and Ivanka Trump also have been reported doing the same...funny how little attention that got) and how she impacted the primary election with Bernie. All the other right wing accusations have shown to be complete fabrications.