A Decade Early and a Dollar Short


Part of my occasional series pointing out that Republican Never Trumper critiques of Donald Trumper amount to literally nothing more than the longstanding Liberal critique of the GOP, ripped off wholesale and re-marketed for a huge profit as brilliant epiphany.

From The Bulwark yesterday:

Yesterday I trotted out my theory that Donald Trump is a symptom of where America is as a country, not a cause.

Reader E.P. wrote in to take the other side of that:

I go back and forth as to how much Trump is a symptom vs. a cause. You’re certainly right that a healthy republic wouldn’t let him get anywhere near the presidency. On the other hand, I’m reminded of a quote whose origin I can’t seem to find: “A man may drink because he is wretched, but he becomes even more wretched because he drinks.” Trump has taken a sick culture and made it even worse.

I see Trump as a symptom so powerful that it becomes its own cause, kind of like a political hard drug. Let’s pretend that Trump is political meth. (Heroin is a more timely analogy, but meth is perhaps more closely associated with rural whites and—like Trump—it makes you want to fight people.)...


First, Donald Trump is not a "symptom of where America is as a country".

Donald Trump is a symptom of where the GOP is as a party, and where it has been for decades.

And second, I don't know who Jonathan V. Last is, but I do wish he'd stay the hell out of my pockets.  This is from me, more than a decade ago:

The last lie a junkie tells himself isn't "I’m not an addict."

The last lie a junkie tells himself is "My being a addict doesn't matter."

And in the Conservative Crack House of Many Doors, Ronald Reagan was that first cocktail. The first line of coke. The first needle. The first "Holy Mother of God!” WOWGASM that shotguns right through the blood/brain barrier, reformats your entire ethical hard drive, and scrimshaws a brand new Prime Directive on the inside of your skull.

Listen to any aging wingnut sighing and jerking sadly off to a tattered photo of Saint Ronnie -- despite the fact that the catastrophes we are now reaping were sown by his ruinous ideology -- and you can hear every addict who ever lived pining for that first Perfect High. The one they spend the rest of their days chasing, regardless of the size of the debts they run up or the ruined lives they leave in their wake.

Clinton? Objectively, Clinton qualifies as the greatest Center/Right President in history, and with balanced budgets, GATT, welfare reform, NAFTA, DOMA, record surpluses, foreign and domestic terrorists brought to book, and an actual military victory, he arguably delivered to the wingnuts more of everything they ever said they wanted than anyone else.

And they hated him for it.

Because Clinton was mere addiction maintenance delivered in measured doses under adult supervision: all policy-wonk that wasn’t cut with that industrial-waste-grade bigoted, psychotic bloodlust that gives Conservatism its wild, freebasing edge. Clinton was methadone, and for the hardcore lifestyle junkie, that shit is for babies.

And Dubya? Dubya was meth with a ketamine chaser delivered hammer-and-anvil directly to the lizard brain.

Dubya was the United States crawling through dumpsters at our national soul’s midnight, killing anything that moves, licking out the contents of random baggies, hoping the little white flakes clinging to the plastic is crank and not rat poison, and waking up the next day -- that horrible, horrible sun-also-rises morning after -- broke and twitchy, arguing over what more they can sell off to keep the party going and who they can blame for their gone-to-shit lives...


Finally, for the benefit of future historians, at the time I was making myself even more of an unhirable media pariah by writing stuff like this and giving it away gratis on my blog, The Bulwark did not exist.  Back then, it was The Weekly Standard, which kept an entire staff of writers, editors, artists and office support gainfully employed by running paeans to glories of the Republican party, long screeds about what a bunch of misbegotten, America-hating, terrorist-lovers Liberals like me were, and cover stories like this: 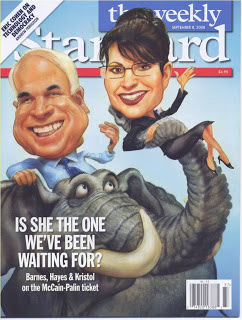 And so it goes.

That was more than a decade ago? I remember it like yesterday. You were right then, and nothing has turned up to debunk it.

Can't you bring a legal action for copyright infringement? It it could get to court, the discovery phase would be amazing since so much of the Never Trump BS is/has been directly stolen from your copyrighted (CC) work!

This morning,in my local paper, the flagship publication for one of the bluest counties in the entire country, the entire editorial page was given over to the empty bleatings of David Brooks and Kathleen Parker.

They both are miserable, horrified. Trump is a monster, neither can understand how things got this way, and somebody really needs to do something about him.

Yet not one solitary blurp about Trump being the creature of the Republican Party that they both labored mightily - their entire professional careers - to bring into being. He just, you know, happened. While nobody was watching from that particular direction. So when we get this fixed, and the world returns to a semblance of normality, we know that they will pretend - once again - that none of this ever happened.

So Driftie, you the man.

You can do =anything= if you can pay the lawyers enough...

With every specific element of the republicans that keep plugging the toilet. Overflowing. Plunging and re plunging. Re-flushing. Their ideological dedication will not go down.

Charlie Sykes had fed his zombies to the point their hunger came for him. He ran to a network he so often demean as liberal UnAmerican garbage for a paycheck.
Such formidable GOP principles they hold dearly and closely like religious beliefs of the Hobby Lobby owner. Caught buying religious antiquities on the black market out of the Middle East.
All the Liberal main stream media reguritating the Santorum, Newies. How they give awe to George Will and Bloody Bill as their private media money makers lost their zombie fan clubs.

Men of the GOP glory days of moral ineptitude.

The fiscal conservative as Rushbo now tells, "was all along a lie and never existed in the GOP"
Kristol and his war for profit dominance.
The religious rights purity of sustaining Reagan's 11th commandment of blessing a republican when having and abortion while impeaching a Democratic godless president for his consensual affair out of wedlock between two adults.

Micheal Steele's programming to be the GOP's Uncle Tom.

The there are the Lindsey Graham, Louie Goehmert and Steve King glorious faithfuls


The Hewitt's billionaire funded promotion to propagandize from the main stream media he built a mantra for his hateful vulnerable weak minded following. Jim Jones just didn't believe strong enough and have the wealth funding nor the deceiving ability of a chameleon.

The everlasting earn you respect and your position of wealth in life from the Right wing welfare Queen of queen's court jester David Brooks in your face.

The chumming for bottom feeding zombies by well paid chum tossers, hannity, Ingraham and their indispensable make it worse agenda.

Their contributions to mankind equals that which makes Trump a Vietnam War 5 deferment War Hero.
Why any parent would not provide the life essentials of things like critical independent thinking for instance. Subjecting them to the harm others will inflict on them with a brojen spirit of submission.
But there is money to be made in the right wing world. Are you willing to harm others for a buck?