Matt Lewis Jumps Out to an Early Lead ... 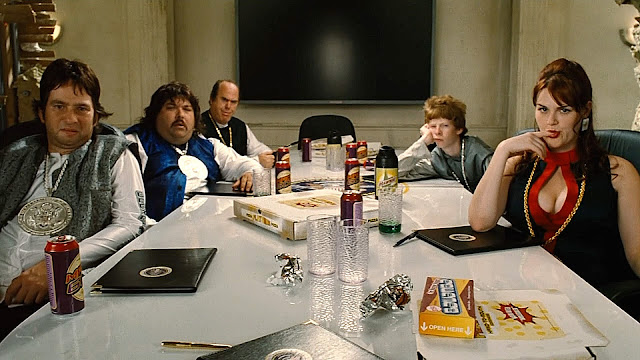 The opinions of Conservative keyboardist-for-hire and bilaterally-symmetrical-American, Matt Lewis, are invariably stupid, but they are stupid in just the right way, which is why he is never without some kind of peripheral work in the Beltway media.  And there he has remained, year after year, growing old stranded in the middle-tier of ridiculous wingnut pundits.  Undistinguished and indistinguishable from every other bland back-up green room Conservative clown.

The Rally Burger of hot takes.

But ol' Matt has.been working out, yes he has.

Stretching.  Yoga.  Hopscotch.  Beer pong.  All the hard, sweaty preparatory training necessary to finally take a real run at the Big Leagues.  To at last make that seven-league-boot leap into the majors with a stupid take so mighty that, for a moment, a hush will fall over the crowd.  Withered old frauds like George Will will shield their eyes against the glare of it and proclaim with the wonder of a child that they have never seen the like.  Mothers will point to it and tell their kids to remember this moment, because this is what Stupid looks like.  David Brooks will pop a boner hard enough to split atoms.

And here we go...(with emphasis added):

In his comments to the Times, King equated Western civilization, which belongs to all of us, with white people only. And that’s just what the hard left wants people to think.

Yep.  According to Mr. Lewis, the entire, racist Republican Party which nominated, elected and loyally supports Donald J. Trump simply does not exist.

Instead, it's just you and me and Steve King, all working hand-in-glove (or, rather, head-in-hood) to take down Western Civilization.

I haven’t really followed Matt Lewis but after seeing this I went back in his archives and read some of his stuff. Check out his assessment of the meeting Trump had with Pelosi and Schumer on December 11. I think that one might be even worse than this one. He may even supplant David Brooks as the stupidest journalist on the Planet.

As I am fairly active in writing and calling my Senators and House Representative that are all GOP. I could share some very challenging responses I relieve from them.
That would rival Brooks, hewitt, Dowd even this Matt Lewis Black face CPAC award winner.

Example;
My House Rep. tells me he voted against the budget bill the 2nd time (Pelosi put forth) after he voted for it the first time. Because, McConnell says --- :he won't bring anything to the floor for vote that Trump does not like and we all know Trump always means what he says and stands by ever word he espouses.
-In other words, no one gets representation except a GOP president. My senators and Representative are led by the nose by McConnell?

This is my Reps. 2nd term. I haven't heard back yet, I resonded to his resonse. Asking if he is aware house GOP majority voted and sent about 50 A.X.A. repeals to Democratic majority Senate and a Dem. President. Voted to repeal another 20 times with a senate GOP majority to vote with McConnell the leader. Even though the president (Obama) would veto it.

* With this said. I have a suggestion for your upcoming Sci-Fi theater.

I formally propose to the professional left management Executives.

Once a month. Do a "Political Science" Award. Collect the competitors from the large cesspool of Conservative mindless brilliance. From Brooks to Tommi Loren and beyond. There is a vast beyond in this universe.
Pick a number of nominees. You could even post them as the month passes in posts. Which you could take consideration from you great blogger panel.

End of the month of competition. The finalists are posted. Their talent moment is evaluated and displayed. With a final award winner exclusively selected and judged by Pro Left top mangers.

This doesn't have to cut into air time for Sci-fi theater.

Political Science Fiction Black hole awards. You could even take the monthly winners into the end of year competition (with the 12 monthly victors)

The possibilities are ripe.
I could merely and humbly ask for it;s concept consideration. It could place nice focus on these brilliant wordsmith sleuths of profound ideological fiction.

I am getting (?) really tired of the Right telling me what I believe (and of the people that pretend to believe this nonsense).