Charlie Sykes vs. Corey Lewandowski is Chavo Guerrero vs. Hornswoggle 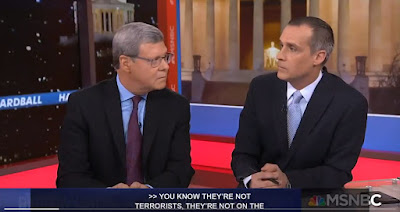 Once you wrap your head around the idea that Comcast is not in the news business -- that they honestly don't give two owl pellets about the "news" except as a means of making money -- it's really not that hard to figure out why Chris Matthews put Corey Lewandowski on with Charlie Sykes on Hardball last night.

Appalling, yes, but not rocket science.

You see, Bill Kristol and Charlie Sykes are two of the most prominent Never Trump con men in the Comcast stables.  Comcast has a sizable financial stake in their success at attracting and keeping audience interest.  Many of Comcast's other investments in Republican cast-offs have either failed publicly and spectacularly (Greta Van Susteren, Megyn Kelly) or are in the process of failing publicly and spectacularly (Hugh Hewitt), so Comcast is making every effort to insure that the rest of its cast of lumpen Republican horribles are that much more carefully curated.

So it was just bad luck and bad timing that Bill Kristol's power base -- The Weekly Standard -- was just stripped for parts and dumped on the ash heap of failed publications next to Trump Style,  Trump World and Trump Magazine.  The reason this is vitally important is because (as I may have mentioned once or twice) one thing that virtually every jumped-up Beltway bigot, climate denier and simpering drivel-monger has in common is that their mass-media teevee credibility is always underwritten by their close association with some established, printed-on-paper newspaper or journal or think tank.

Something solidly brick-and-mortar with a paid staff and business cards and office managers.

Up until now, Comcast has been content to use Sykes as wingnut packing peanuts:  a lump of bespectacled Conservative carbon they can use to pad out panels of talking heads who are all weepy that the GOP is fucked in the head and Donald Trump is insane.  But given his elevated profile, affability is no longer sufficient.  They need him to up his game and come across as more aggressive.   More indignant.

And nothing achieves this more efficiently than giving him a stooge to yell at.  A professional wrestling villain that the audience is already primed to despise, and that Charlie Sykes can get up on his hind legs about.

As I said, this is all sickening, but not really that hard to figure out.

Cory and Sykes created many of these problems during their right wing billionaire welfare to cornhole Americans into hate and then pointing at what to hate.

Now sit on the "hardball" liberal show (so called). Argue their brilliant only they can fix it(s) . After being shunned and discarded as RINOs to Libtards by their Toxic Mutants that no longer need their creators.
There they sit like Trump lard, telling us they know best. Do they really think a liberal leaning person is going to follow them like their former Toxxic Mutants?

Chris, do you really want you ratings to plummet or is it that you have the corporate welfare key to the exec restroom. You after some of those FOX viewers?
Didn't Chris notice that the M. Kelly experiment went awry?

I rather like the meaningless drivel from Saint Ronnie at the top.

-
They bigly fail to tell me something I didn't know.

They do tell me their jarred dolls get a warm tickley feeling running down their legs, and I didn't know that. and, really, I don't want to know that.

Oh, if Comcast, FOX or all the mush head soup sippers. Like Sykes, Kristol and
the Hewitt, pronounced ( EEuw-it).

You will have Sinclair to look forward to.

There are other channels and streams. Know how to operate them.

Come to the future. Where The, "Hollowed be the ORi".

Barf. No thanks but good analysis of what it "means."

I guess the wealthy who own the M$M have nothing else to offer, since they refuse to truck in reality.

It's not even bread and circuses. There is no bread or certainly nothing of sustanence. And I really couldn't demean a circus by comparing it to this worhtless debased tripe.