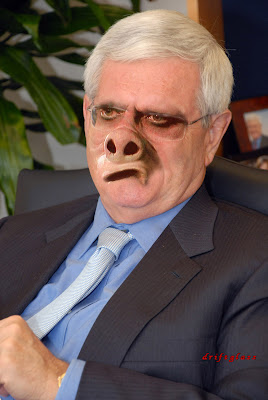 One thing you can say about Newton Leroy "Advocate of civilization, Definer of civilization, Teacher of the Rules of Civilization, Leader (Possibly) of the civilizing forces" Gingrich is that he knows his audience.  He knows that when he speaks on Trump State Teevee, he is talking to a zombie army of reprogrammable meatbags who will "remember" the past exactly as Gingrich -- who is an authorized representative of the Republican Ministry of Truth -- tells them to remember it.  Until the newly revised "past" becomes inconvenient, at which point it will be re-revised, and the meatbags will "remember" the new version of the past just as fervently as they "remembered" the now-forgotten, previous version of history.

For example, now that the House of Representatives has changed hands and Democrats have the authority to launch investigations with actual teeth, the Party of Benghaaaaazi is suddenly "remembering" that congressional investigations are a terrible idea.  Now that the Democrats have subpoena power, Gingrich -- disgraced serial adulterer and hard-charging, Liberal slandering, hate-mongering mastermind of the Bill Clinton witch-hunt -- suddenly "remembers" the Clinton impeachment as an unfortunate glitch that somehow got out of hand and interrupted a golden of bipartisanship cooperation.   From Crooks & Liars:


And the thing is Gingrich will get away with it.  Because they always get away with it.  It's one of the many perks of being an elite member of a party which has an army of reprogrammable meatbags as its sword, and Trump State Teevee as its shield.

They all claim their historian "elite-ness" (unlike that liberal evil elite status). while erasing the facts to replace them with more pleasant meatbag thoughts.

# people died in Benghaziiiiiiii and kept dying for years because? Meatbag jelly fillings.

How many died in Niger? What of that Yemen raid with the seal killed and all which unplanned arrogance went wrog on that mission? But that would be liberal lies, Leftist harassment made up for political gain.
It is clear how Benghazi was kept on life support even though the paiteint was brain dead. The Meatbags recipients held that notion all through the "GOP Benghazi Select committee". That spent tax dollars on pampering the committee's desire to get out of actual work.
Then it happened...!
Bengazi became private server and emails. Emails from HRC to her daughter on the day Chelsea gave birth. Very suspicious, highly volatile for enemies to hack and gain information.
Notice how that has gone away?
Taking a page out of the TV game show, "Let's make a Deal" converting that show into, " :Let's make up a issue".

Hilariously, My House republican loves to script how he tries to reach across the aisle but the wascally Libs make it difficult because they won't do as he says. Of course, enjoying his extreme use of the Majority powers.

He ran Ads that his Democratic libtard campaign opponent would, ---------
"Vote With Nancy Pelosi if elected" !!!! A democrat voting with Democrats is worse than an Martian Alien invading caravan of martian ISIS and MS 13 blending in the caravan in space.

So now, Mr GOP bipartisan returns to D.C. in the minority.
Does the GOP thank Jesus for their minority status? In time Pat Robertson will tell us his exclusive secret interview with the Son of God himself on this Trial and Tribulations issue..

So now, does he reach across the aisle of bipartisanship and , VOTE WITH NANCY PELOSI" ???????????
With no more White House beer parties in sight (sorry Kavanaugh-I know, you like beer). The binge drinkers are going to be going thru detox which is still covered under their socialized health care plans and would have been even if they repealed the ACA for everyone else but them, their beloved staffers, and Alaska and Maine. Everyone else, Cold Turkey for Thanksgiving.

...and just like that being against congressional investigations into the executive branch is the newest "deeply held political belief" of all my conservative neighbors, co-workers, and family members.

After seeing that clip, listening to liberals whip themselves into a foaming madness is even more ridiculous. The mastermind of Zipper Gate just gave away the game, 20 years later. To keep chasing Clinton's penis even after Newt the Nazi told you it was bullshit shows how broken our media is.

I wonder how he feels about Lucy McBath winning his old congressional seat?

Newt has been a dangerous asshole for a long time. The Nationalist Party of Trump was inevitable when his machinations took hold of the Republican Party.

The doctored video shows Trump's Orwellian "Ministry of Truth" is following the totalitarian Party's tactics in "1984". It's as if the book is their operators manual.

Those who support the American Axis of Evil are evil, or abetting evil.

There are many, many , many people in Georgia who remember what an asshole Newt was and is. Too bad the MSM won't be bothered to bring them on the teevee every Sunday.