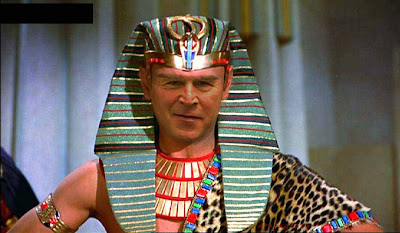 You want to know why we're staring down the barrel of the end of the republic at the hands of a doddering, unhinged shit-gibbon?

Well, since you asked, I will tell you.

Sans the long and lurid history of the devolution of the GOP into it current condition --  an unsalvageable, racist cesspit-- it comes down to this:  We never settled accounts for the Bush Administration.

The meathead mob who Karl Rove and Matthew Dowd and Dick Cheney and Fox News whipped into a berserk frenzy and used as a bludgeon to re-elect the worst president in history up until that time were allowed to put on tricorn hats, swaddle themselves in Gadsden flags and fake patriotism and pretend that they had never heard of George W. Bush.  And now -- with a big assist from Russia, James Comey, The New York Times, cable teevee, the "End The Corrupt Duopoly!" purity brigade, et al  -- that meathead mob has saddled us with President Stupid for the foreseeable future. 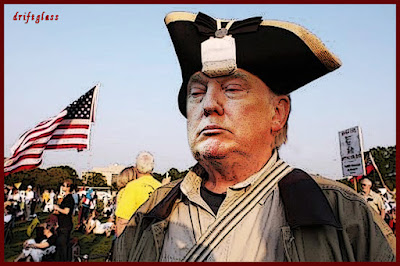 Nancy "Impeachment is off the table" Pelosi was too much the deal-making politician to do this job the last time around.  She wanted to get shit done in a hurry -- and did -- and saw that rolling out the political machinery necessary to drive a stake through the heart of the Bush Administration would burn most of her reserves of political capital.

And Barack "Let us sit and reason together" Obama was too much the constitutional law professor and dedicate Centrist to do this job the last time around.  I love the guy, warts and all.  I think he was a better president than we had any right to hope for, and did a lot to make the lives of ordinary Americans a little better.  But he was way, way too besotted on that ol' Both Siderist poteen that David Brooks and Matthew Dowd and Michael Gerson and all the rest of the Beltway Wise Men pass around.

As I wrote eight years ago ("Between the Devil and the Deep Blue Left"):

For his entire adult life, Barack Obama has succeeded by offering himself as the perfect midpoint between others. As a mathematical function, not a leader. As an averaging equation, not a true believer.

Since he showed up on the political radar, he has marketed himself relentlessly as

Half black and half white...
Half American urbanite, half world-citizen...
Half wonk, half preacher...
Half Harvard Yard, half Back o' the Yards...
Half red and half blue...

And this bone-deep reflex -- plus his formidable intellect and ability to rise to the rhetorical occasion -- would have prepared him perfectly for the Presidency...if this were 1960.

But it is not 1960 -- nor is he dealing with Harvard Conservatives pals or Springfield Republican pols -- and being a results-agnostic "process guy" when the process is utterly broken no longer works.

Instead, the ideologically-lockstepping Right led by Rupert Murdoch and the Koch brothers have found in Obama their perfect patsy: the Democrat who seems constitutionally incapable of counter-punching, who can only feel comfortable while suspended between two opposing positions and who will, therefor, find a compromise between opposites even when he has to invent wholly fictional opposing views to which he can cede half the playing field...

Yes, as long as President Obama was willing to sing from David Brook's Both Siderist hymnal and meet every Republican act of sedition and sabotage with an open hand and promises of further compromise, they were all with him.   But the minute he broke with them, however briefly and justifiably , this is what happened ("The Man Who Mistook His President for a Hat"):

Yes, I’m a sap. I believed Obama when he said he wanted to move beyond the stale ideological debates that have paralyzed this country. I always believe that Obama is on the verge of breaking out of the conventional categories and embracing one of the many bipartisan reform packages that are floating around...

So the White House has moved away from the Reasonable Man approach or the centrist Clinton approach...

It has gone back, as an appreciative Ezra Klein of The Washington Post conceded, to politics as usual. The president is sounding like the Al Gore for President campaign, but without the earth tones. Tax increases for the rich! Protect entitlements! People versus the powerful!...

-- because he wanted President Obama to stay in Centrist Neverland, playing Very Serious Moderate Pirate games with him and Tinkerbell (Ross Douthat) --

The president’s goal in 2012, I suggested, would be to try to paint himself as the moderate bipartisan grownup, and dismiss the Republicans as extreme, intransigent, and hyper-ideological.

Based on the actual details of the deficit plan that the administration just released, though, I would like to retract that analysis. Between the size, scope and design of the tax increases and the skimpiness of the entitlement reforms (nothing on Social Security, minimal tinkering on Medicare), it seems that the president will be running for re-election as Nancy Pelosi instead...

-- and all the other bloated, corrupt and inexplicably still-employed (Mark Penn) --

Barack Obama is careening down the wrong path towards re-election.
He should be working as a president, not a candidate.
He should be claiming the vital center, not abandoning it.
He should be holding down taxes rather than raising them.


The Right -- the same Right which the charter of Mr. Brooks' Centrist Neverland says must be endlessly appeased and capitulated to ... right up until they shit all over you ... after which their psychotic intransigence should be met with ever greater acts of appeasement and compromise... forever (or "pre-compromise, followed by acquiescence to right-wing priorities") -- predictably ate Mr. Brooks alive.  Everyone from the toddlers at Pajamas Media, to the insufferable Megan McArdle to the WaPo's recently and much too hastily sainted Jennifer Rubin ran circles around Mr. Brooks and mocked him for ever trusting the Kenyan Usurper.

No one in the media labored as hard to bolster Barack Obama as a candidate and defended President Obama more strenuously than New York Times columnist David Brooks.

But now Obama is galloping leftward...

But that was based on nothing more than wishful thinking and sharply creased pants. Now Brooks is reduced to throwing a bouquet at the feet of the Republicans, conceding that “at least Republicans respect Americans enough to tell us what they really think. The White House gives moderates little morsels of hope, and then rips them from our mouths. To be an Obama admirer is to toggle from being uplifted to feeling used.” It sounds like Brooks might need some grief counseling. He’s lost his idol and his credibility.

So we tried playing nice with the Rabid Dog Republicans in the 1990s.  It was called the Clinton Administration, and all it got us was six years of sabotage, slander, witch hunts and impeachment over trivia, followed eight years of catastrophe under George W. Bush.

This time around we can collectively be smart enough to face the sad fact that the "Let us sit and reason together" approach can never, ever work with Rabid Dog Republicans.

To meet this perilous moment in history, this time around we must collectively acknowledge that, to deal with Rabid Dog Republicans, philosophically and rhetorically, we can no longer be Marcus Aurelius.

This time around we need to be Marsellus Wallace.

The first thing we need to do is win. Until we do, they can and will do what they like with us.
After we win, the burning of the lifeboats will be easier and more effective.

.. might be among your finest broadsides..
raking fire while sailing with the weather edge
the losers pinned against a lee shore
about to meet the lobsters & crabs
among the rocks

When they go low, bury them.