Andrew Sullivan Fights For His Seat On The Lifeboat 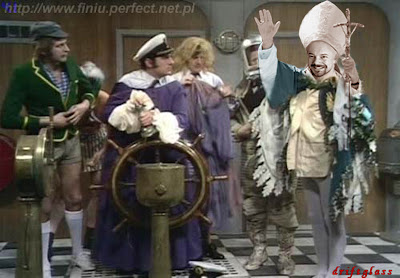 "This is your captain speaking.
There is no need for panic...do not rush for the lifeboats ...
Women, children, Red Indians, spacemen
and a sort of idealized version of a gay Republican
expatriate Libertarianish papist Renaissance Man
(but definitely not a Liberal) first!"


Now that the Republican Party is fully out and proud as the rootin' tootin' batshit racist shit-show Liberals have always said it was, many of it's most prominent enablers are scrambling for space on the same Both Siderist Lifeboat.

Here is a small sample of that vast scrum of unscrupulous professional Conservative havers-of-opinions from just the last few days.

Why I’m not becoming a Democrat. Medicare for All will finish what Trump and GOP started: the bankrupting of America. https://t.co/P4VyAjeAyf
— Max Boot (@MaxBoot) February 23, 2018

Ditto. If someone could save the Democrats from driving this political train off a cliff, Medicare is ALREADY going bankrupt. Entitlement growth is unsustainable. As reckless as Trump has been driving up massive deficits and debt, Democrats somehow managed to one-up him. https://t.co/v4rv13C9KP
— Joe Scarborough (@JoeNBC) February 23, 2018


The Gun-Control Debate Could Break America

A rage more personal than political exists on both sides, and poses real danger to the ties that bind us as a nation...


Trump has turned the right into a foul, spit-flecked froth of racist reactionism, and he has evoked a radical response on the left that, while completely understandable, alienates me and many others more profoundly with every passing day.

Sure, Andrew.  One possible theory is that the rank and file of your Conservative movement were all choir boys who spent their days singing Ave Marie and their nights meditating on Burke before Donald Trump showed up and used his Orange Lantern Powers -- 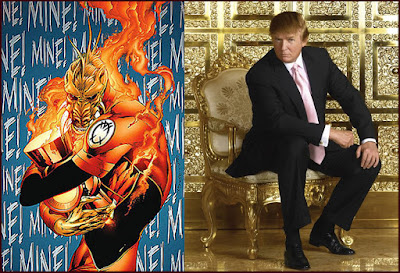 to convert them all into foul, spit-flecked froth of racist reactionaries overnight.

And now that the Left has been proven to have been 100% right about the Right all along -- now that the real Republican Party and the real Conservative movement have Hulksmashed his delusions hard enough to launch them into orbit --  so, like so many of his species, Mr. Sullivan has no place left to go and no alternative but to try to squeeze his ass onto the same Both Siderist Lifeboat between Max Boot and Joe Scarborough.

Continuing with Mr. Sullivan, I can tell you that it is going to come as a huge fucking shock to the adult Sunday school class that Bluegal and I help facilitate, and the faith-directed writing classes that we co-teach, and to all the nice people at the church where I usher every Sunday to learn that --


The left has denounced religion as insane...

But of course, Andrew Sullivan absolutely must lie about Liberals like me and my wife in this way so he can get his Both Siderist Lifeboat Boarding Pass stamped like so:


The left has denounced religion as insane; the right has redefined it into another twist on identity politics.


The only antidote to Trump and the politics he has forged and intensified is this kind of self-doubt and self-knowledge. It refutes him while never empowering him. It opens up the possibility, if we let it, that the insanities of today’s right and left will not inevitably ratchet themselves into an ever tighter spiral of vengeance and mutual incomprehension

Then, a little gratuitous, drive-by Hillary-bashing because Mr. Sullivan is an incredibly bitter little man whose movement is in ashes --


I will vote for a Democrat this fall and encourage everyone else to do so, because it is our only hope against accelerating authoritarianism. But I’ll do so with the same kind of nausea that led me to support Hillary Clinton in 2016...

So how do we know Mr. Sullivan is lying?

Because the alert reader will notice that the graphic at the top of this post is from a remarkably similar piece I wrote about Andrew Sullivan nearly a decade ago.  In other words, years before Donald Trump glided down the Escalator of Doom and magically...


...turned the right into a foul, spit-flecked froth of racist reactionism

Yes, Andrew has been making a living slinging this same Both Siderist bullshit for a very long time now.  Because he has to.  Otherwise, as I noted all the way back in 2009...


...he would instantly lose his place in the food-chain, wouldn’t he? Because like that microscopic number of self-loathing black Conservatives who make their daily bread by serving the interests of the Southern Bigot Party, more than any other single factor, it was always the sheer gawking, oddballness of the brazen self-delusion inherent in being the gay champion of the Christopath Homophobe Party that put Mr. Sullivan in the spotlight.

That was what gave him his unique and lucrative cache.

And some of us have the receipts.

Andrew Sullivan can, of course, fuck off.

Mr. Sullivan has no place left to go and no alternative but to try to squeeze his power glutes onto the same Both Siderist Lifeboat between Max Boot and Joe Scarborough.

"The left has denounced religion as insane"

Yes and please be sure to enjoy the band’s rendition of “Nearer My God To Thee” as you board the lifeboats.

Joe might have a case - if there were any nations whose public health-care systems actually bankrupted them. Perhaps he could benefit from contemplating just how depraved & surreal the spectacle of injury or disease driving Americans into bankruptcy & poverty looks to the rest of us - or how laughable the very notion of anyone else actively adopting such an overpriced, sadistic & unworkable system is.

Who is paying Sulllivan? No, I do not mean his print employer?

He is paid for his printed work. But who pays him for the content?

Like the paid spokesperson for the NRA. Who gets booked on all media to Bogart the the public speech forum.

Her GOP Citizens United NRA employment is free speech. And as she commands, she is a "MOM" which makes her superior in what she says above other moms. Dads, sons, Daughters, bothers Uncles and Aunts.

Does anyone truly conclude Dana would be on all the media, given the entire speech spotlight.

The media gives Dana (the NRA paid spokes-mom ) , the same damn media treatment they provided to Trump's empty awaiting podiums during the campaign.

What brought this out in me was the thing stuck in my craw in you post.

Where the statement is,
"Why I’m not becoming a Democrat. Medicare for All will finish what Trump and GOP started: the bankrupting of America."

Which the NRA spokes Mom would get the speech time to add on to the gun issue any time she desires.

But, Canada is not bankrupt. America is in deep debt doo-doo and we do not have complete socialized medicine.
There are many countries that have no health care system (socialized or free market) and their country's economies are seen in Somalia.

How about this for a conservative 2018 campaign position.

Save our military and veterans from the evils of socialism. Take that health care away. Give them health care policy insurance company free market choices.

If you are a marine fighting in Afghanistan, use your own money and buy a health care policy specifically for your needs. If you do not want health care in case of injury. That is their choice.

Socialized health care forced on our military is killing them....!


What about Americans who pay Federal, State and sales taxes to pay for congress, their staffers, police , firemen,Mayors etc. healtch care. Forcing socialized freebee charital health care on them.
The guy who pays his taxes for all others health care . Who's employer does provide health care and doesn't pay him enough to afford health care for himself and his family>

As long as they can afford to live in their country of the good life. Everyone else can live in Somalia and Yeem or Syria. Or win the Lotto.

I guess they did not read their godess Ayn Rand who railed and bitched like them. How she ended up not living in a mar-A-Lago community in the end.

How Ayn was so disenchanted with her beliefs and ideology. She lived with the shame of using socialized medicine programs the she would condemn and deny others.

Because you know, it is about superiority and who deserves and doesn't and what people will allow words to flow out of the mouth that never stopped off in the brain for editing and content consideration. The mouth just roars.

The deal is, and here is Sullivan's biggest derangement: when it comes to room on a lifeboat, he is gay, and will be asked to swim.

If I was a baker, I would not deny a gay Sullivan his cake if he wanted to purchase.


But for his NAZI and KKK enabling and GOP authoritarian disguising for the GOP.

If he was floundering in the water paddling for a lifeboat. I would toss him an anvil..

What an idiot Max Boot is. Medicare for all would probably actually lower healthcare costs and give better results than the current system. How dumb can he be?