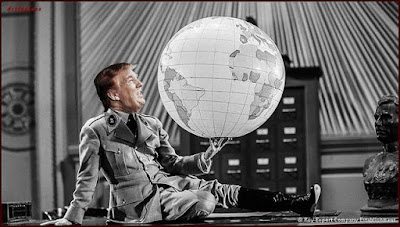 One thing that came through loud and clear in 2016 was that if you wanted the dudebros to get on board you'd damn well better be down with free college and legal weed.

Stripping tens of millions of Americans of their health insurance?

In 2016, there was no high quite so exalted and toe-curling as long, deep hits off the purity bong and no buzzkill quite as eye-rollingly Buzz Killington as Hillary Clinton's position on marijuana.  Slow. Cautious.  Let's decriminalize it.  Let's let a few states experiment and see what happens.

So, just like every other issue about which he knew absolutely nothing, all Il Douche had to do to defuse the "legal status of marijuana question" was tell his rally goobers "Me too" during one of his incoherent rambles through his rustic opinions about Russia, Mexicans, and Her Emails.

Want Marijuana Legalized? Then Donald Trump is Your Best Option
If marijuana legalization is the most important issue in your universe, vote Donald Trump.

...
Regardless of my inner struggle with accepting the impending reality of Trump as the 45th POTUS and The Running Man neo-cyberpunk society that will emerge, there’s one existential fact that remains. If you want marijuana legalized, Donald Trump is your best option this November.

And guess what!  OMG, Il Douche loves Wikileaks too!  I mean, what more could a dudebro ask for?


Because really, isn't Radical Disruption (tm) the only way to finally end the K'rupt Duopoly once and for all and Bring The Revolution (tm)?

And then, several months later (from the WaPo)...


I’m not surprised actually. I think I was one of the first people to say last summer that I thought Donald Trump was going to be the likely Republican nominee, and people thought I was crazy to say it. At first I didn’t know, but then I realized where the state of the country was. It’s fascinating. It’s concerning. But I actually think it’s reflective of the dissatisfaction with the status quo, which I think is a good thing. I think we’re in a disruptive time in our country anyway, with the economy and everything else, that we need disruption in our politics and in our governance.

In local Dudebro news, two high school seniors in a small town high school started a "controversy" by wearing Brother's-In-Arms T-Shirts which depict AR-15's across the back. The school principal stopped them since the shirts violated the dress code.

The interviewed student said "I respect the principal and understand the rules, but something something liberty!"

I didn't expect an 18 year old to articulate the real reason of: "I respect the principal and understand the rules, but I'm a straight, white, male, and member of the dominate local religion. Therefore I should be able to flaunt whatever rules I want to whenever I what to.
I mean, we all know who those anti-violent depiction dress codes were really aimed at, am I right?"

I've come to despise the term "disruption," really a euphemism to replace the old, despised term "creative destruction." Means the same thing either way - a large group of people are about to be truly fucked over to the benefit of a much smaller group, and the person preaching "disruption" really wants to get into the good graces of that smaller group.

boy, the contradictions sure are being heightened!

As someone who was born and raised in Humboldt County, and has a couple of good friends in shallow graves along the Eel River from when the price of pot exceeded $2,000 a pound (I'm old) I've never been confused about who we have the best chance of ending the terrorist program that is the "war on drugs" by electing.
Jerry Brown decriminalized weed in 1975.
I can't remember which Republican administration rescinded that law, but I assume it was Pete Wilson's.
I had to hammer that into the heads of a few of my Ron Paul fancying friends along the way. "If he wins, and he won't, you'll be needing a lot of pot, legal or otherwise to cope with the damage he will do."
That line has become curiously useful again lately...

The dudebros of 2016 are the Racist Ronnie Paul stans of 2008. All you have to do is promise them protection from the few things that can get them in trouble and derail their privilege-driven lives, and they'll make up arguments for why you're secretly the *real* progressive choice.

It's a scam that rightists have been running for years, and no matter how many times we tell the Bong Brigade that it's happening again, they'll just keep falling for it.

Just stop with the dudebros bullshit! White males under 30 voted for Hillary plus 8%
Figure out a way to suppress the over 45 White vote, rather than alienating independents, progressives, and Millennials who are inclined to vote Democratic.
If you have to motivate the pot smokers, point to Obama's policy on enforcing Federal law. Maybe screen a Cheech and Chong movie at voter registration drives.

I'm a white male over 45, do you want to suppress my vote?

Doug, as a rule, yes, but not in Oakland. Women too, suppress all Whites over 45 from voting and Democrats can win.
On Election Day, Driftglass should distribute pot brownies and Jack Daniels to his neighbors in Springfield, BEFORE they remember to vote.