The Monster At The Door 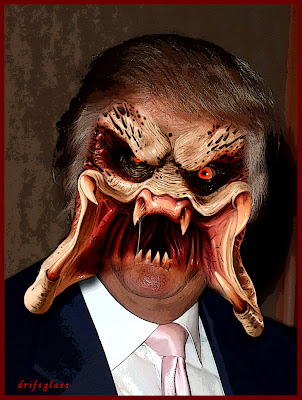 If you are a Republican, whether your are rich or poor, man or woman, a fascist or just really, really cool with fascism, every day of your life is spent in a dim little shed.

And there is always a monster at your door.

The monster is Reality.  Terrifying Reality.  The Reality that you have spent your life as a fool and a chump. The Reality that everything you believe is a lie, that everyone you trusted to explain the world to you has lied to you and laughed at you behind your back and, worst of all, the Hated Left has been right about you all along.

And so you stop having any interest whatsoever in facts or history or actual politics or policy debates. In fact, all of those thing become mortal threats to your self-image, and so inexorably your Prime Directive becomes a mindless imperative to always agree with the mob (and whoever happens to be leading the mob today), to never, ever admit error of any kind under any circumstance, and (to insure your place in the cult) to immediately attack anyone who you suspect is Not Of The Body.

Because if it ever gets in -- if you are ever forced to face any piece of the Reality you have held at bay your whole adult life -- you will never live it down.  Your identity will collapse. Suddenly you will be the one who is Not Of The Body!   Your friends will turn on you.  Your community will exile you.  And worst of all, the Hated Left will make you eat shit in public forever, and they dance on your untended grave singing "We Told You So" until the end of time.

But every day, no matter how loudly your turn up Rush or how loyally you stare into Hannity's dead doll eyes, Realty goes right on circling your mental hovel, growling like a hungry wolf, glowered balefully at you through the cracks in your fragile walls and brittle roof, and year after year, Reality has only gotten bigger and stronger and more ravenous.

Until, at last, the only thing standing between you and Reality's long claws and sharp teeth is the biggest, oldest, and most reliable Big Lie of all.

The Big Lie of Both Sides Do It.

I have already written literally thousands of posts on the toxicity of Both Siderism.  How it is the worst Big Lie of all because it enables all the other Big Lies.  How the Big Lie of Both Sides Do It has become virtually indestructible because it come with the blessing of the Beltway media itself.  How hundreds of unqualified hacks and frauds have built lucrative careers within once-respectable media companies by doing literally nothing but automatically barking out "Both Sides Do It" in the face of every Republican atrocity.

And this particular morning I'm just plain tired.  Tired of getting hoarse and going slowly broke writing over and over again, year after year, about such an obvious truth.  Tired of watching obvious liars and con men and collaborators from the good, gray pages of The New York Times all the way to the bottom of the Wingnut Welfare food chain all making very comfortable livings by trafficking in this horrible lie.

So today I'll leave you with just a few of the many, many Both Siderist stool samples from the last few days.


Liberals might also search their consciences when it comes to refusing to call out evils by their precise names. https://t.co/iVOKujVFXz


The way the alt-left sees itself is far more flattering than how it really looks. pic.twitter.com/DhlbslyYg9
— Erick Erickson (@EWErickson) August 16, 2017

Having Donald Trump as President drags us all through Filth. I have never in my life been so disgusted with current American events as I am over the last handful of days. Republicans have piled a mountain of stinking garbage as high as the clouds, and this is the stinkingest garbage, just foul. Trump's press conference yesterday makes me want to puke, I watched and I was literally nauseated this is disgusting and repugnant, my body wants to reject it, but having Trump as our president forces us all to go through this disgusting garbage. Donald Trump brings Dark, Dark, Dark Shit. Foul, and ugly.

May I just add that in World War II, Stalin was on the side of the good guys, whatever else he might have done in his life. Equating Hitler and Stalin is just the most gigantic example of both-siderism in world history, requiring as it does to forget who started World War II, and who was out to exterminate whom.

A tail as old as time.....well at least in the western annuals of Authoritarianism.

Opponents of right wing fascism don't taking their beatings well enough on Saturday is all the evidence paid conservative media operatives need for the existence of some violent 5 column "alt left" who hates the Fatherland...er..country...right....country that needs equal condemnation and, probably, some direct punishment from the state.....because the Alt Right....isn't that a term the Alt Left made up..... anyway, aren't they just groups humble apolitical citizens worried about their heritage.

The only difference this time, unlike the 1920's and the 1950's in the U.S. when the monuments went up, the monuments are coming down.

I have made the mistake of reading, occasionally, "right"-wing revisionist history in which all who opposed them were Communists, secret Communists, or slightly "left" tinged. It gets quite silly.

I don't have to approve of Stalin (and, in fact, I don't) either before or after WWII to appreciate that on Hitler's abrogation of their pact, the Russians went to war against the Nazis (and sustained large losses).

I heard this from the NAZI saluting LA La Ingrham.

Is there an Alt Lib? Alt Progressive now too? What about all those Alt independents?

For a long time I had thought Alt Right meant disenchanted republicans leaving the GOP for the Independent party. Or even the Give Me Tarian party.

Constantly re branding they are. The need is forever desperate to do so.
So what happens to the Koch Brothers Tea party republicans as the Alt Right makes its moves. They are going to have to have a redo on party purging and many, many republicans on all sides (including both sides) in the GOP to puge out their own. Again!

Perhaps Trumpelthinskin can use the "both sides" meme often enough to turn it toxic.


"alt-left" who coined this fatuous fantasy? Erick Erickson? This is their cover for the President that is equivocating about racists and Nazis? Are they kidding? Is this their rearguard action on the way to The Bunker? -- where they will be surrounded on All Sides after the statues and flags all come down.

And to think, you were just 7 days from retiring your "both sides" rant. :)

Take a deep breath, maybe play with some children, maybe watch cat video's on the intertubes,

But the slowmotion trainwreck just keeps speeding up, mere week's ago, it passed ludicrus speed, and like many, the WTF jumping of new sharks every day, seems to have worn you down,

Take a break if you want to,

We'll still be here, when you come back

If nothing else, I'm amazed at all the people in social media saying both sides don't in the post two days, gives me some hope

Many of the guys with the armor and tikki torches (and the vast majority were men) are ordinary, suburban, probably mostly private sector, middle class employees or retired arch-conservative oldsters with guns. In other words, the same sort of middle class Germans during WW II who lustily supported the Nazis ok, not allowed to own guns then). However, the US version of the disease is actually systemic not acute as it was in WW II. Racism and religious intolerance have been fundamental to America since long before the United States was an actual nation. Liberals have been fighting those degenerate forces for 300+ years but the fact is that we will probably be fighting it for another 300 years (if we actually last that long either as a nation or a species).

If nothing else, I'm amazed at all the people in social media saying both sides don't in the post two days, gives me some hope

There's barely a left in the US, compared to Canada, AustraliA, Europe, even Britain,

You could fit all the actual "left" in the US in a mid sized mall,

As daily it becomes clearer and clearer, in the US you have center left, and Nazi's and Nazi enablers.

For all the NAZI and white supremacists apologists, as Tucker.

How would he like the scum bags marching through his gated community back and forth across his lawn. singing toss the Jews in the oven.

I would not care for all this mixed garbage in my front yard.

You know what,
Now that Trump and his disciples have joined publicly. NAZIs in particular.

Wonder how that sits with Israeli Prime Minister Netanyahu?
Benji is so in love with Trump. Can he see past the NAZI thing to hold their relationship together?

Just as the only redeeming factor about Strongman Trump is that he's making it impossible for everyone to just casually say BothSidesDoIt™, if and when Strongman Trump starts saying it himself, he'll make the phrase toxic.

Perhaps more USians will act as citizens and vote these fascists and their right-wing authoritarian followers out of power, rather than remaining simple consumers staring at a smaller screen while ignoring the larger screen.

Wonder how that sits with Israeli Prime Minister Netanyahu?
Benji is so in love with Trump. Can he see past the NAZI thing to hold their relationship together?

Considering that Bibi is one of the Likudniks working hardest on a final solution to the Palestinian question, the only thing he had the Trumpanazis disagree on is who exactly are the subhumans who need to be genocided.